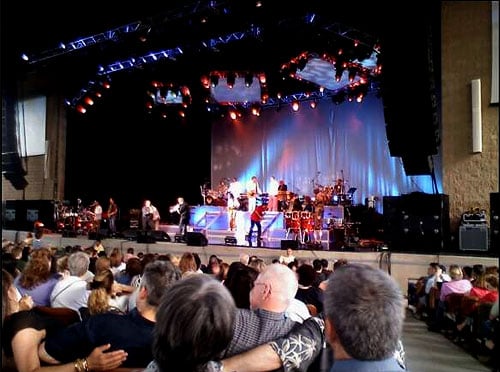 It’s a new concert season at Bethel Woods Center for the Arts in Bethel, NY. Bethel is the home of the original 1969 Woodstock site, and it’s a great place to see a concert! Bethel Woods has only been hosting concert events since 2006 and last night’s Earth, Wind & Fire and Chicago concert kicked off the 2009 season. The concert was a lot of fun and both bands were excellent in their own way.

If you’ve never been to Bethel Woods before, be sure to allow enough time to get into the Pavilion area. There’s only 1 way into the venue, and you’ll most likely be sitting in traffic on 17B for at least 20 minutes. You can tailgate in the parking and get there early if you want (to miss most of the traffic). It’s probably a good idea if you do that. My girlfriend Kristen and I arrived at Bethel Woods when the doors opened, and got our tickets at the will call window. There are more lines to wait on near the Pavilion like ripping your ticket and getting a lawn chair if you feel like paying 5 bucks. So beware of that as well. I went inside the museum building real quick to use the restroom and admire the beautiful place. Everything was really clean inside, and had air conditioning, which felt nice from standing in direct sunlight. As I made my way down to the pavilion, I admired the view some more. They couldn’t have picked a more beautiful spot. The pavilion itself was great, and in my opinion, any seat would have been fine. I would think the lawn seats are fine as well. I was lucky enough to get a prime spot underneath the pavilion. I was lucky because it was lightly raining later on in the evening. By the way, when is it going to stop raining in New York?!

The main reason why I wanted to check out this concert was because of Earth, Wind & Fire. My parents used to play their music a lot, along with other classic rock & funk bands. Sure, there are only 3 original members remaining in the band but 3 important ones. I’ve heard of a few songs from Chicago, but mainly didn’t know too many other songs besides “Saturday in the Park” and “25 or 6 to 4.” Or at least I thought I only knew a few songs. Chicago is one of those bands that you can’t name too many songs of theirs, but when you hear them, you know immediately what it is. “Oh, they DO this song?!” Perhaps my parents just never played Chicago, but I knew a lot more EWF songs than Chicago’s.

Anyway, the evening started out with both bands coming out together to do a few songs. The stage shows for both bands was impressive. The stage set featured 2 stairs that led up to the keyboards, and drums. The lighting pieces from the top of the stage moved and tilted; if I was one of those drummers I’d be freaking out. The bands sounded great together and there were roughly 16 people on the stage playing. The combined horn section sounded awesome! Robert Lamm of Chicago announced to the crowd that they recently recorded 2 or 3 songs with Earth, Wind & Fire. Those songs would be available for download if you donated 3 dollars or donate 3 cans of food. I think that’s a great idea, and think more bands should do that. I believe one of the songs that was recorded was played in the opening, but I’m not positive on that.

Earth, Wind & Fire played their solo set first and opened up with “Boogie Wonderland.” That song got the crowd up and dancing in their seats, including this reviewer. Throughout their set, I was amazed that Verdine White still has loads of energy playing his bass. Phillip Bailey still has the pipes to sing most of the songs in EWF. Original lead singer Maurice White isn’t in the band anymore due to health reasons. Their set was filled with funk numbers and slow R&B songs. According to Bailey, many of us were conceived while one of their songs was playing. That made me chuckle and cringe at the same time – Sorry Mom and Dad. Some of the songs that were played during this EWF solo set included “Got To Get You Into My Life,” “After The Love Has Gone,” and “That’s The Way Of The World.” EWF played a cover of a Chicago song, which was one of the songs recorded for charity. I’m not sure which song it was, but the band put a cool jazz spin on it. Chicago’s cover of one of the EWF songs sounded better to me. The highlight of the set for me was when the band brought out huge bass drums, and turned off all the lights. They came out with glowing shirts and gave an exciting drum solo. Then the electronic voice of “Let’s Groove” came on and everyone stood up to dance. I was really happy to hear that song since it’s my favorite EWF song. After that, it was time for Chicago.

“Saturday in the Park” was the opening song in Chicago’s set. After watching Chicago, I realized I knew a lot more songs than I originally thought. I also realized Peter Cetera was in the band, and sang most of the songs until he left in 80s. I knew more Chicago songs from the 80s than their earlier songs. Even if I didn’t know all their material, the band is still fun to see. Each member is highly skilled in the instrument that they play, plus just about everyone sings in the band. Each song I couldn’t keep up on who was singing since they all had wireless mics on. Some of the songs that I recognized and enjoyed were “Just You ‘N’ Me,” “Does Anybody Really Know What Time It Is?,” “Beginnings,” and “You’re the Inspiration.” “You’re the Inspiration” Is probably the song I know the most from Chicago, yet didn’t know they actually did that song. Chicago went back and forth with faster & slower songs. They played equal time as Earth, Wind & Fire and then left the stage. They put on a great set!

After a few minutes of waiting, both bands came back for an excellent encore. “September” was played first and everyone was out of their seats once again. I didn’t care how goofy I looked; I was dancing along to the music. After that they played a song I’m not familiar with, but then played 2 more Earth, Wind & Fire songs “Sing a Song” and “Shining Star.” Those two songs sounded amazing, especially with the additional horn section. The final song of the evening was the classic Chicago song “25 or 6 to 4.” Overall, it was a great concert at a terrific concert venue. If you ever get the chance to see a concert at Bethel Woods Center for the Arts, be sure to do so.

Here are 2 extremely crappy photos taken with my camera phone: 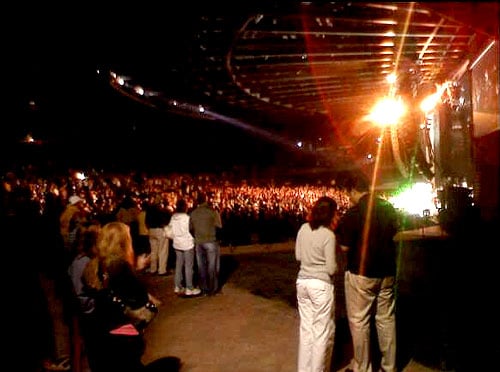