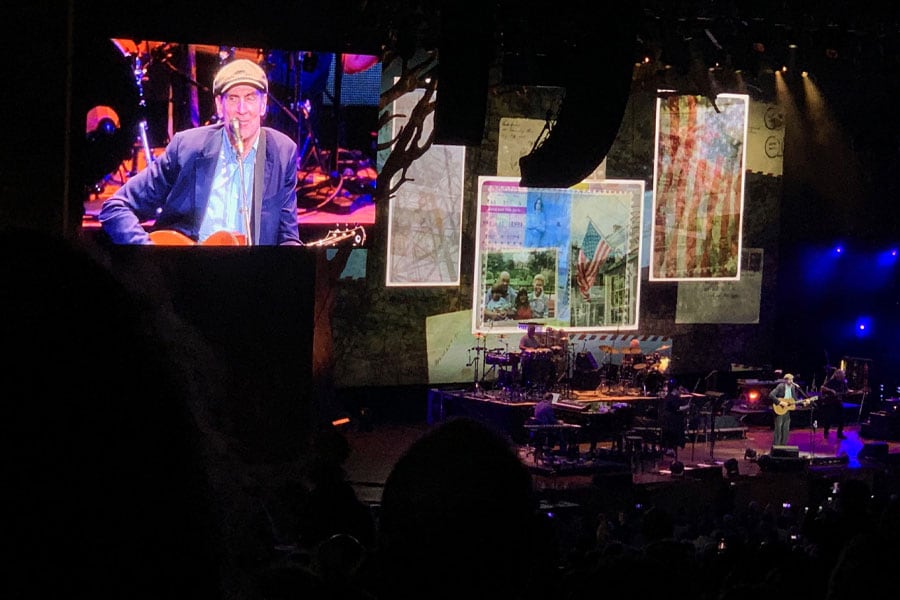 Amid the uncertainty caused as we (slowly) emerge from pandemic is now knowing what live music might look like. Would it even be feasible under reduced-attendance circumstances? Would we all wear masks? Would artists perform in an empty theater?


Would they ever perform at all?

At least some of those questions were answered Tuesday night at the Merriweather Post Pavilion in Columbia, Maryland, with a fabulous double bill of Jackson Browne and James Taylor, who provided a solid evening of entertainment to a capacity crowd—some masked, most otherwise.

It was clear that the two septuagenarian singer-songwriters were as grateful as the gathered crowds to be sharing in the communal art of concert presentation once again. Browne was up first, and he took his vaunted place at center stage to raucous, appreciative applause. Browne, who famously contracted covid early on the pandemic, has since stopped dying his hair, and thus he appeared more “in tune” with his age than ever. He was also minus his typical dark sunglasses, which, combined with his newfound beard, gave him the look of a man who has been through quite a lot since his last tour—which, indeed, he has.

As if to underscore that very notion, Browne kicked into “I’m Alive,” with its praising chorus of not only surviving but thriving. “The Long Way Around” from his stellar 2014 album “Standing in the Breach” followed.

Browne has been out promoting his latest album, “Downhill From Everywhere,” and from that quality record he trotted out the titular track, “My Cleveland Heart” and “Until Justice Is Real.” From there it was into hitsville with “Doctor My Eyes” and “Late for the Sky.”

The gathered 20,000 fans went absolutely bananas when Browne brought out his co-headliner, Taylor, to join him at center stage for “The Pretender,” with the two trading off lyrics. If the evening had one low point, it was that Taylor’s voice seemed a bit iffy on Browne’s tune. I wasn’t sure if the song was in a key Taylor wasn’t expecting or what, but his vocals on “The Pretender” were underwhelming. Otherwise, it was amazing to see the two legends jamming together.

Browne then finished up, of course, with “Running on Empty,” which brought the fans to their feet.

After a stage changeover, a montage of Taylor fans was seen on various screens playing his music before a number of pictures of younger Taylor “aging” into his present day flashed on the screen. The North Carolina native came on, all smiles, and like his costar Browne, thanked the crowd for coming out.

“We missed you guys,” Taylor said.

Taylor’s fans weren’t disappointed by “Country Road,” “Never Die Young” and “Copperline,” all of which banished any earlier worries that Taylor’s voice might not be up to par.

He then told of how the loss of his friend John Belushi scared him into sobriety, and he dedicated “That’s Why I’m Here” not only to Belushi’s memory but also to anyone in the audience who is in recovery.

“Don’t worry, we’ve also got songs for people who are fucked up,” Taylor said, which drew a huge laugh.

Soon thereafter, he plugged in his blue Fender, indicating something more electric was in the offing. This came to pass with a mashup of “Chili Dog,” which he wrote about the experience of going to Pink’s in Los Angeles, and “Steamroller,” an absolute monster of a bluesy tune on which every member of his backing band got a chance to solo. The nearly 10-minute rocker was the highlight of the set, and brought everyone to their feet.

Taylor also played a song from an old Warner Bros. cartoon called “As Easy as Rolling off a Log,” which was charming, and followed it with “Sweet Baby Jesus.” Taylor and a stripped-down version of his band played “Fire and Rain,” and the crowd gasped in appreciation next as he started “Carolina in My Mind.”

After a cover of Marvin Gaye’s “How Sweet It Is (To Be Loved by You),” Taylor and his band returned for an encore. He took the time to introduce his backing vocalists, which included his own son, Henry.

“Hey, is Jackson still here?” Taylor asked, obviously knowing the answer as Browne walked back on to introduce “Take It Easy,” the song he and Glenn Frey wrote some years ago. Browne remained for the evening’s capper, a cover of Carole King’s “You’ve Got a Friend.”

Taylor, Browne and Taylor’s band all lined up for a bow, and Taylor left the stage as he had entered: with a beaming smile.

It was a wonderful night of live music, and a bit of an F-U to the pandemic and its having swallowed a year and a half of precious playing time.