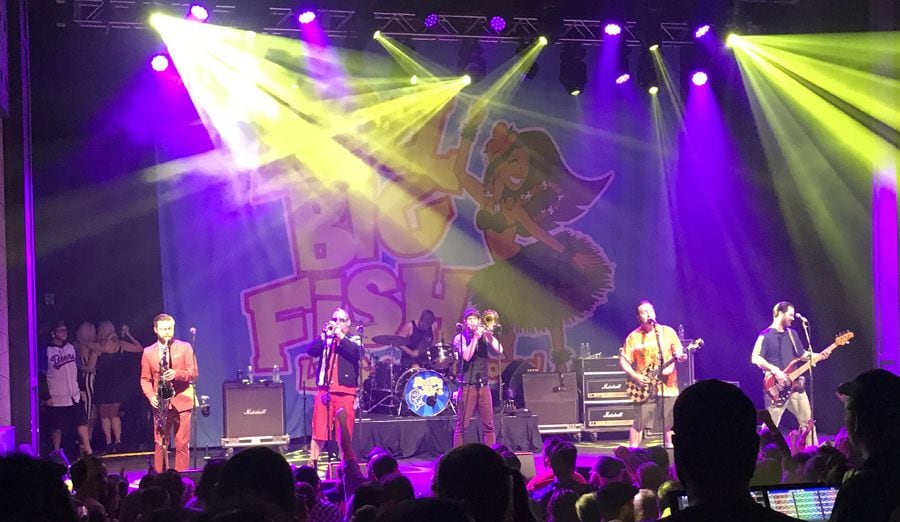 It seems like it has been months since Reel Big Fish hit up the Pittsburgh area because well…it has only been like 18 months since they tore it up with Anti-Flag, Ballyhoo! and Direct Hit. This time out they brought their superhero buddies in the Aquabats as well as the superheroine duo Dog Party.

The show was held at a newly revived theatre called the Roxian Theatre in McKees Rocks which is only a few miles outside of downtown Pittsburgh. There have only been a handful of shows before this one and the theatre had a very sleek and modern look inside but mixed with that 1930s downtown vibe. I was reminded of Pittsburgh venues of old like Metropol and Nick’s Fat City.

Start time was set at 7pm with the doors opening at 6 but for some reason the doors didn’t open until around 6:30. Being the first time at the Roxian, I assumed that Will Call was inside the doors but after waiting in line until the doors opened late, I then had to go and wait in the Will Call line on the other side of the main doors. I’ll have to say that this was easily the longest wait for Will Call in memory. There were only about a half dozen people in front of me with one person waiting on them and the wait was about another half an hour.

Continuing my enjoyment of waiting in line, I hit up both merch booths for a shirt and other goodies. Thankfully (I guess) the show started late and I didn’t miss anything although the view of the stage from the merch booths was great. The stage sat above a lowered pit level with the back part of the club being on just about the same level as the stage. There was also a balcony section above for reserved seating. 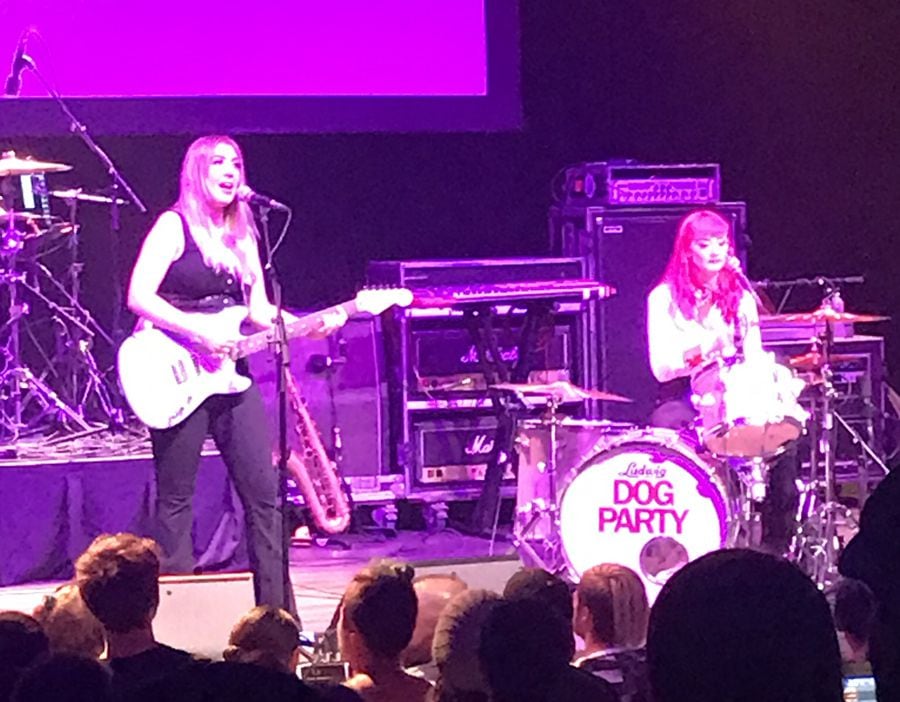 At about 7:15 Dog Party hit the stage. Dog party consists of two sisters both in their early 20s with one on drums and one playing guitar. There was no bassist but the guitar was set up to make up for the bass sound. Both ladies split vocal duties as they tore through scorching punk rock songs and indie rock tunes. I own a few of their albums and was familiar with their music beforehand but this was my first time experiencing them live and they put on one hell of a set. They seemed to pick up quite a few new fans as the night rolled on as the audience was cheering louder with each passing song. 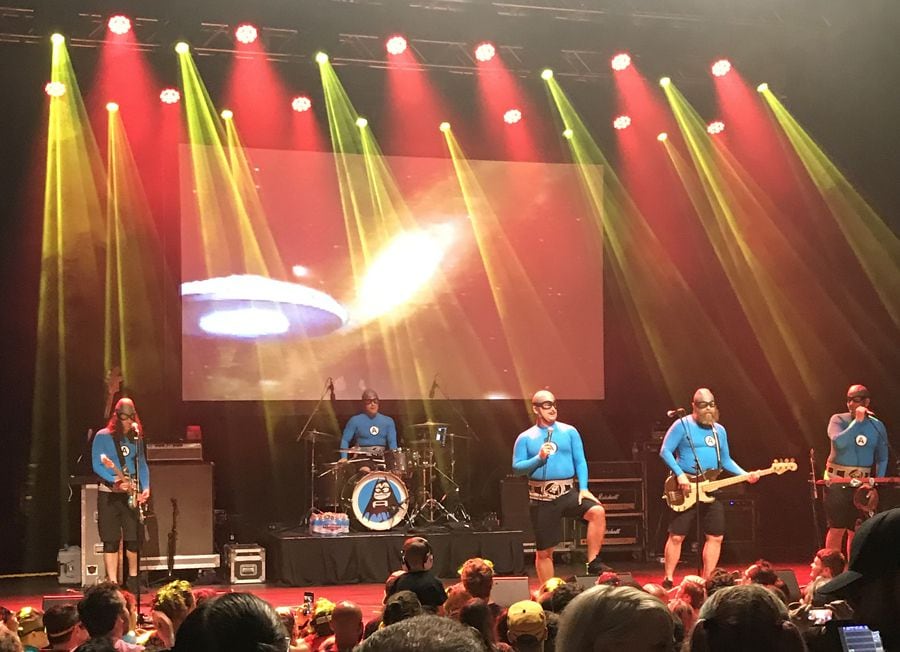 Following up Dog Party were none other than the super rad and mega-mighty Aquabats. It has been quite a long time since the Aquabats actually toured let alone hit up Pittsburgh. Having a television show or two will definitely take time out of your touring schedule. They started off the night with “The Shark Fighter!” from their last full length album “Hi-Five Soup!” and then surprisingly ripped off a few ska tracks in “Cat With 2 Heads” and “Martian Girl!”. Grabbing a large inflatable pizza pool floaty, it was obvious which song was next and you guessed it…”Too Drunk To Fu…”, nah actually it was “Pizza Day”! Some little kid got to crowd surf on the inflatable pizza for the entire song. Jealous…

Giving some love to their newer releases they provided the audience some sonic-induced fun with tracks such as “Hey Homies!”, “Fashion Zombies!” and “Look At Me, I’m A Winner!”. Much to my surprise they threw out a great cover of “Your Love” by the Outfield sung by the drummer Ricky Fitness before closing out the night with seminal fan favorites “Super Rad” and “Pool Party”.

Following the superhero antics of the Aquabats was the ever lively and always fun and entertaining ska punkers in Reel Big Fish. Since their last visit to the Burgh, they released a new album titled “Life Sucks…Let’s Dance”. The album continues the trend of fun, catchy and witty ska songs of their past few releases. I was anxious to hear some of these songs live for the first time.

Reel Big Fish decided to go old school with their setlist openers as they kicked things off with “Trendy” followed by “I Want Your Girlfriend To Be My Girlfriend Too”. They then jumped into the opening track from their new album, which sounded great and got the crowd skanking.

They continued to mix things up with songs from across their entire catalog. “Why Do They Rock So Hard” was represented with “The Kids Don’t Like It”, “Turn the Radio Off” had the band showcasing fan favorites “Sell Out”, “Everything Sucks”, “S.R.”, “Beer” and “She Has A Girlfriend Now” while other great studio selections like “Where Have You Been?”, “Everyone Else Is An Asshole”, “Your Guts (I Hate ‘Em)” and “I Know You Too Well To Like You Anymore” were sprinkled in with some random cover songs and new album tracks. It was great to hear one of my favorite new songs live for the first time in “Bob Marley’s Toe” as well as one of my favorite older songs that’s newly resuscitated in “Ska Show”…RIP The Forces of Evil.

Reel Big Fish closed out the night with the greatest cover off all time with that being their horny cover of a-ha’s “Take On Me” to a tired, exhausted sweaty crowd that never stopped dancing. As usual, Reel Big Fish made a lot of people smile, dance and genuinely have a good time. One of the reasons that I’ve seen them play a dozens of times or so over the years is that they always put on a good show, they always make people happy and they’re very good at their craft. They’re a band that would surely put a hole in my soul if they stopped touring and I’m thankful that that’s not the case. They’re one of the bands that continuously give Western Pennsylvania love and have for decades now. Having Dog Party and the Aquabats along for the ride made this old-timey ska punker quite happy and was the icing on the cake for a great show that kicked off my 4th of July holiday. See ya soon fellas!