Riot Fest kicked off on October 1st with a secret Smoking Popes show, five days before the scheduled start. The event had a total of 17 shows (not including secret shows) and spanned six official venues in the city of Chicago. I was not one of the lucky ones that was picked to attend the Smoking Popes secret show but I did do my best to see as many shows as I could over the course of the week. It would be impossible for me to accurately recap the shows that I did see because like most, I attended some as a fan.

I found myself at the Congress Theatre on Friday night. The heat hit me three feet in and there was no turning back. There were streams of people digging themselves out and an equal amount trying to dig their way in and this was just the lobby. Just like that, the stale sweat air said to me, “Welcome to Riot Fest.” In all the shows I have seen at the Congress – last year’s Riot Fest included – nothing has been as heady as this.

The night started at 6 p.m. and the lineup included X is For Eyes, Off With Their Heads, Bouncing Souls, Circle Jerks, The Lawrence Arms, and Bad Religion. It was was a punk rock night for the ages. Literally all ages that included audience members as young as seven and as old as…well, my dad. And everyone was ready. Ironically enough, Bad Religion opened their set with “Do What You Want” off of their All Ages album. Their set included probably the best version of “20th Century Digital Boy” I have ever heard and closed out with “Los Angeles is Burning” and “Prodigal Son.”

Singer Greg Graffin mentioned the celebration of punk many times throughout the night. It has been 30 years since they have been playing and as Graffin mentioned the changes he was glad to see take place: more girls in the pit. He also segued into “New Dark Ages” by stating that several things have not changed. Bad Religion’s politically charged music never comes off as angry or spiteful. For the entire set, the band just looked liked they were having fun and Graffin did not seem to be able to perform a song without being animated. Their musicality appeals to different ages and races because their rhythm and messages are universal. By the end of the night, I felt guilty using an iPhone.

I mention the diversity of the audience members that night because what I think Riot Fest accomplished this year – and what I have not seen other fests do – is create an event that appeals to different people. People who like Bad Religion might not have liked or been aware of any other band that was on the bill that night. Yet, Riot Fest included bands that may not have been in people’s repertoire and did not allow themselves to cater to a specific niche of punk.

I made my way to the Metro on Saturday night to catch one of the last Cap’n Jazz reunion shows (and their last Chicago show). They wasted no time getting ripping into their all too short set list. Tim Kinsella went right into the crowd on their first song “The Sands Have Turned Purple.” Crowd surfing, which is usually not allowed at Metro and will get you kicked out, was going on throughout the set by both Kinsella and audience members. There have been a string of reunion shows by bands in the last year and none can be compared to Cap’n Jazz’s set. For “We Are Scientists,” Kinsella held up his french horn like a siren calling on a higher being.

Before playing “Olerud,” Kinsella said “I think it’s important to mention life is weird.” And he was right. Cap’n Jazz had an extraordinary reunion run throughout the summer and it was as if mother nature didn’t it to end because Chicago was experiencing an Indian summer with the temperature hitting a high of 86 degrees that Saturday. Yes, sometimes life is weird but it is weird for a reason.

Cap’n Jazz ended their main set with “Puddle Splashers” and returned to play what Kinsella called karaoke. He took to the mic and said “We’ve got six minutes” and with that, Cap’n Jazz ended their Riot Fest with being the greatest cover band that ever lived with A-Ha’s “Take On Me” and a sweet rendition of Davey von Bohlen’s “Que Suerte.” 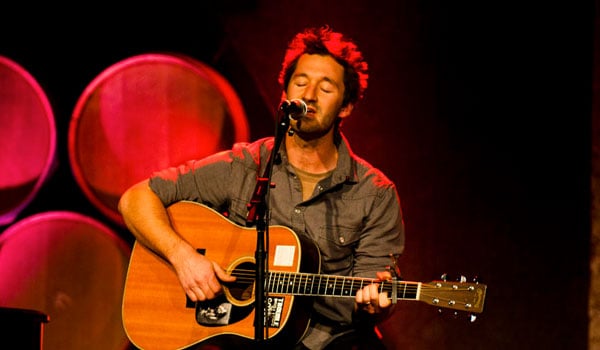