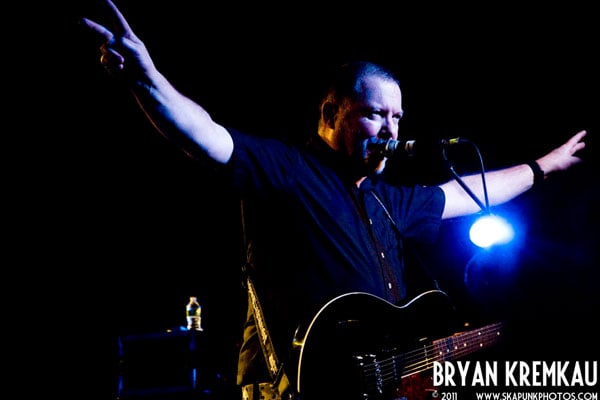 The Ska is Dead tour made a stop at Starland Ballroom in Sayreville, NJ yesterday. The main tour features The Toasters, Mustard Plug, Voodoo Glow Skulls and Deal’s Gone Bad. For this particular show, NJ ska fans were in for a treat since a few other bands were playing like the Pilfers and Hub City Stompers. It felt like a Ska Warped Tour to me.

It’s been awhile since I saw a lot of these bands, and the fact that they were all on the same bill was just something I had to see. Having the Pilfers play this show was the clincher for me since I can’t miss a Pilfers show. I lost count on how many times I’ve seen Coolie and the gang. I didn’t really want to see every band, so I showed up to the venue around 4pm. Doors opened at 2:30pm so I have no idea who played. The Avon Junkies from Staten Island hit the stage around 4pm. The crowd really digged their sound and a lot of the kids were singing along to their music. I thought they were okay and they had one or two songs that stood out. I was really anxious to see the other bands though.

NJ’s own Hub City Stompers were up next, featuring Rev.T Sinister. He used to be in Inspecter 7, and I’ve seen Hub City Stompers one other time but can’t remember which show it was. I think they opened up for English Beat at the Chance? I like the band’s bouncy ska songs because they remind me of Inspecter 7 and other bands from this area. At one point they were making fun of the kids doing a skankin’ circle pit and they did some dork song that got stuck in my head for the rest of the night (and not in a good way). The song is funny but it’s kind of annoying at the same time. Overall, I liked their set & their songs; but some of them I could do without.

After Hub City Stompers, was Deal’s Gone Bad from Chicago. I never saw Deal’s Gone Band before so I didn’t know what to expect. The band mixes traditional ska & reggae with soul…a lovely combination. I’m also not too familiar with their albums but they have released stuff from Jump Up Records and Megalith Records. The Aggrolites came to mind when watching the band play; both bands are filled with energy & are very soulful. Lead vocalist Todd Hembrook reminded me of some preacher with his singing style. I’m not sure if the crowd was digging them as much as the punkier bands but I certainly like Deal’s Gone Bad. I definitely want to get some of their albums now. That’s one important aspect of ska; you need to hear some bands live to truly appreciate them.

The lights went dark and Cheech Marin started to sing “Earache in my Ear” over the loud speaker. Which meant only one thing, that the Voodoo Glow Skulls were up next. It’s been at least 8 years or so since I last saw VGS and I was really looking forward to their set. They opened up with “Shoot the Moon” and the band was all over the place…dancing, jumping, headbanging, and the crowd was certainly into them as well. I was singing along while I took pictures as they went through songs from “Firme” and other early releases. The band mainly stuck in the ska-ish stuff since it was Ska is Dead after all. I was hoping they were going to play “Insubordination” but they played other songs from “Who Is, This Is?” like “Dog Pile,” and “La Migra.” For the most part, “Firme” got represented heavily and I didn’t have a problem with that. Some of the songs that they played from that include “Fat Randy,” “Charlie Brown,” “El Coo Cooi” and “Land Of Misfit Toys (which they finished off with).” They definitely were a favorite of mine that day.

During VGS’ set and other sets after this, there was a photographer in the pit that was getting on my nerves. She had all-access I believe, and had a speedlight that was popping off every second. But the thing that made it worse is that she was sticking her camera over her head, and shoving her camera in the band members’ faces. I don’t know if bands like it or notice it, but things like that annoy the hell out of me. Plus, anyone who sticks their camera up and just aimlessly snaps away isn’t a real photographer in my mind. It takes some sort of skill to look into the camera and compose a shot. Anyone can just pick up a camera and snap away without even looking at what you’re shooting at. I’m sure half the photos she took were elbows and ceilings. Note to photographers who do these “Hail Mary” shots, DON’T DO IT! And other thing while I’m at, don’t sit down in the photo pit! I don’t know about you but I like the freedom of moving around and getting different angles. By sitting down on the barricade and shooting, it hinders other photographers from moving. Ok rant over…

Pilfers were up next, and they were the band I wanted to see the most. I can never get enough Pilfers, considering they always put on one of the best live shows. They were only playing 2 shows on this tour so seeing them live these days is rare. It looked like the band was annoyed with the audio setup or something, but they decided to press on after it was taking too long. Pilfers started with “Yakuza” and it didn’t take long before Coolie Ranx was climbing onto the photo pit barricade. He was having a hard time balancing himself on the gate and almost had a few close calls of cracking his head open. Coolie was falling backwards and the security guard quickly got him before he fell. I think at one point I even helped Coolie get down from the barricade.

The band was energetic as usual, and played a lot of the Pilfers hits like “Hypnotized,” “Generation,” “Aqua,” “Lay” “Mr. Exploita” and they finished up with “Shits Up in the Air.” It was great to see the original lineup again playing, and they still know how to bounce around the stage. The highlight for me was having Vinny come over to my camera and sing into very close. I’m happy that the photos came in focus, unlike the Jim Lindberg photos where he’s giving me the finger. It was nice for a change to have Vinny singing to me instead of hitting me over the head with his trombone haha. I always crack up when I take pictures of Anna because she’s always smiling and posing for the camera. I missed a few jump shots from Nick, but got a few others that were good. You might have noticed that Nick was on a few episodes of Rescue Me this season. I don’t know how frequent the Pilfers will be playing, but if you ever get the chance you got to see them live!

Mustard Plug were up after Pilfers and they were another band I was looking forward to seeing. Their newest album is really good and probably one of their best albums to date. MP were probably one of the first ska bands I listened to and “Too Stoopid” was a song I just listened to a lot. I can’t remember, but I don’t think they played that one. They played songs from their new album “In Black and White,” as well as “Pray for Mojo,” and “Evildoers Beware.” They also did some songs from their early release, playing songs like “Skank By Numbers,” “Brain on Ska” and “Mr. Smiley.” The crowd was in a crowd surfing mode during their set, which the band acknowledged. Good thing they didn’t crowd surf during the Toasters set or Bucket would have let them know not to do that.

Mustard Plug always deliver a steady performance and their horn section is always tight. After all these years, the guys just know how to have a good time. I just love watching bassist Rick Johnson because he always gives photographers great guitar poses and jump shots. Other highlights of their set include them playing “The Freshmen,” “Throw a Bomb,” “Life Is Too Short” and of course “Beer Song.” Depending on what Ska is Dead tour show you see, but sometimes Mustard Plug headlines.

The infamous The Toasters fittingly headlined the show. At this point, the crowd looked dead tired from crowd-surfing during Mustard Plug’s set and were sluggishly dancing in their spots. It could be that they were skankin’ for 7 hours? Since Bucket lives over in Spain now, I’m not sure if this is a permanent lineup of the Toasters. Over the years, Bucket has been the only remaining original member of the band. The band has slimmed down over the years whereas there used to be a toaster like Jack Ruby or Coolie, keyboards, and at least 3 people in the horn section. Now there are just 2 horn players, Bucket, bassist and drummer. I’ll admit, the band isn’t what it used to be but glad to see Bucket continue on with the band and the Toasters name.

Some of the Toasters songs that were played that night include “2 Tone Army,” “History Book,” “Pirate Radio,” “Thrill Me Up,” “Shebeen,” “Social Security.” I watched the band up until 10pm and then it was time to go. We had a long drive ahead of us, and I had to work the next morning. We left after the Toasters played “Weekend in LA.” I heard Coolie Ranx came out to play “Run Rudy Run” and “Dub 56” in Boston but not sure he did for the NJ show. I would have liked to have seen that though.

Overall, the entire show was really fun to see with all these great ska bands. I would have liked to have not had 2 or 3 bands play; that way it wouldn’t have been such a ska overkill. If I had to pick, Voodoo Glow Skulls, Pilfers and Mustard Plug were the highlight bands for me.