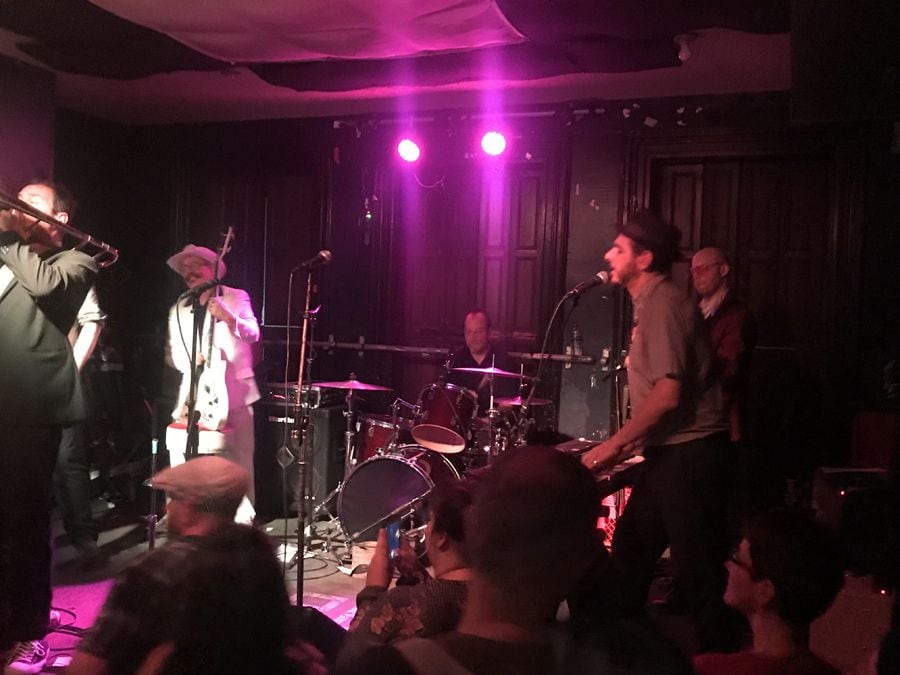 The boys of Slack are back in Pittsburgh once again Jack, and this time they picked up the Mid-western rocksteady group of the Green Room Rockers and Pittsburgh’s own iNCO FIdO to cause a ruckus with.

Opting to play at the smaller venue in the Smiling Moose this trip to the Burgh, the Slackers sold out the show weeks in advance and it was a crowded joint from the get-go. Getting the activities going were the local musical gang of iNCO FIdO and they starting things off with a ska cover that I couldn’t quite put my finger on and forgot about by the end of the night. It reminded me of something from one of the “Hey Brother” compilations. They mixed things up through the rest of their set with a mix of soul, funk, rock and punk that always gets the crowd going and incites a positive reaction. They had the largest collection of musicians of the evening, managed to completely fill up the entire stage but still found room to dance and cause some organized chaos.

Following up the lads and lass of iNCO FIdO were the Green Room Rockers who mixed their blend of rocksteady and reggae into the soundtrack of the evening. They had some great original tunes, threw in some cover songs including one of blues legend Tyrone Davis’ “Can I Change My Mind” which was brought to third wavers attention by the Pietasters and genuinely had fun and got the crowd dancing.

After the usual break, most of the Slackers hit the stage minus Vic. He was probably in the back practicing his vocals or something, right? HA

Soon enough, the full band was on stage and got the sticky night even stickier. The band started off with some classic tunes such as “The Nurse”, “Cooking For Tommy”, “Watch This” (which included a shout out to those like myself who first heard of the Slackers via the first “Give Em the Boot” compilation) and “Feed My Girl”. While people in the audience were crowded shoulder to shoulder, they still found the space to skank their hearts out to the tunes in the air. The Slackers opened up to some audience requests and the first one we got was voted upon because the crowd needed more ska, which ended up being “Manuel”. “Henderson Swamp” was another request that made it into the set list later in the evening.

With the crowd in a sweaty tizzy, Vic and company continued their command of the audience with a variety of rocksteady, reggae and ska. Mr. Glen Pine took center stage with a cover of the Misfits “Attitude” as well as the bands’ original tune “Eviction”. The Slackers also threw in their version of Rancid’s “Wrongful Suspicion” which was co-written by Tim Armstrong and Vic Ruggiero.

Finishing up with an encore and some crowd participation, the Slackers did their thing and provided everyone in attendance with a wonderful night of fun and music. There was a full house and that’s a far cry to some lean attendance for ska shows over the past ten years. Each and every year there are more and more people that are either rediscovering or discovering the band for the first time and supporting their Pittsburgh shows and the ska scene in general. The Slackers are one of the hardest working bands in the business as well as the most talented so they deserve every ounce of recognition that comes their way. It’s good to know that I’m not the only one that enjoys them coming to the Steel City each and every year. See you next year guys!