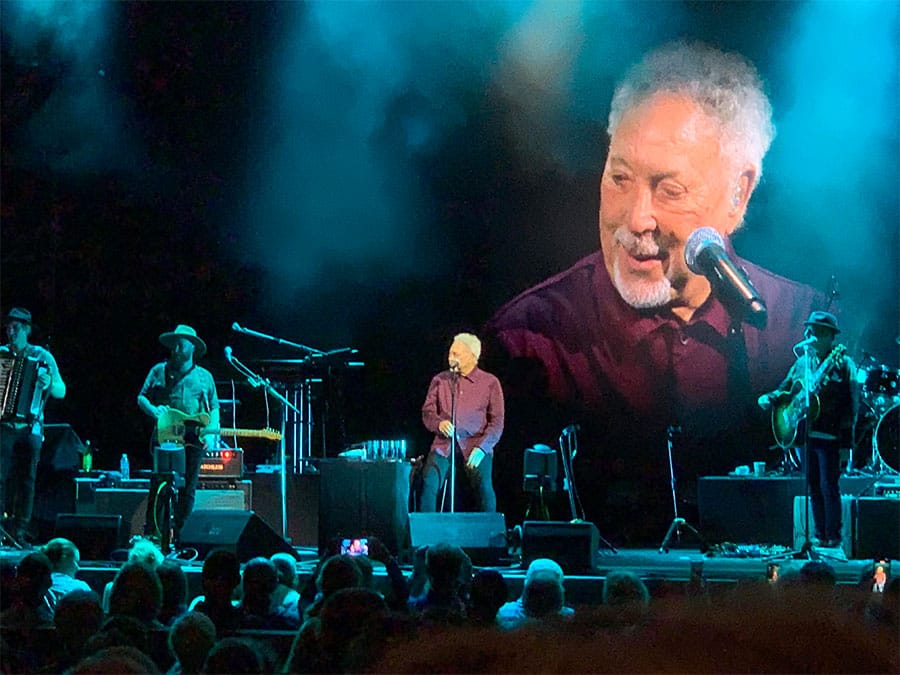 8:01 on the nose. That’s when Tom Jones, with eight decades of life and nearly as much experience as a performer behind him, took to the stage at Northern Virginia’s Wolf Trap Filene Center for the Performing Arts Saturday evening. In this timeliness, the Welsh crooner, no matter his age or the amount of time he has been “in the business,” as he tells it, reminds not only his fans but any casual concert goers that this is, in addition to his career, his job. But boy does he enjoy it.

The entire audience stood and cheered as Jones ambled to a stool at center stage—a walking cane at his side for assistance. As if to toss off any notions of “is he too old for this?” Jones got to his stool and promptly lifted the cane and pointed it at the audience, miming firing a musket. Age may be just a number, he seemed to say, and even if entropy might be having its way with his body, it would not in any way sink the proceedings.

As is nodding to his years and his mobility woes, Jones’s first song out was “I’m Growing Old,” a cover of a Bobby Cole song, with its repeated lyric of “I’m growing wise; I’m growing, yes; I’m growing old,” which Jones performed solely with his pianist, Paddy Milner. The remainder of his ensemble—six in total—then joined the singer for a cover of Bob Dylan’s “Not Dark Yet,” one of the poet’s more haunted poems about acknowledging encroaching mortality but not yet giving in. Reports have been rampant that Jones’s voice maybe isn’t up to standard, but he quickly quashed any potential doubters early on with both his spot-on pitch, his spirit and that famous smile.

Tossing aside the seriousness at that point, Jones spread his hands wide to welcome the Wolf Trap’s 7,000 gathered. He took note of several Welsh flags flying in the audience, pointing out the dragon standard of his ancestral people.

He half-apologized for holding court atop his stool rather than run about the stage as he might have liked; he related that he’d had a hip replacement on one side of his body a few years ago, adding the other has been giving him trouble of late. He’s due for a second replacement back in the U.K., he said, but not until after his run of American dates is over. The crowd nonetheless cheered him on: Even if the singer couldn’t amble about the stage as he might have in full health, they were appreciative that Jones would still give it his all.

And how! Informing the Wolf Trap it was time for a time trip back to 1965, Jones and Co. commenced on “It’s Not Unusual.” It brought the crowd—not precisely in the flower of youth—to its feet as Jones, in absolutely fabulous voice, amiably journeyed through arguably his most famous song. From there Jones transitioned to a song he had made famous in a Woody Allen movie around the same time, “What’s New, Pussycat?” The fact of Allen’s negative headlines of the past few years didn’t sway Jones from giving the naughty song (“meow”) his all, what with its many, many entendres. A woman of retirement age in the row ahead of me—upon hearing lyrics such as “You’re delicious and if my wishes can all come true, I’ll soon be kissing your sweet little pussycat lips”—fanned her face, either in mock ecstasy or genuine.

Jones shared that a few years ago, he became the oldest artist to ever have a No. 1 album—when he was 80. That same winning grin on his face, he winked at the audience and said he believed he could still break his own record, bum hip or no. This too drew a hearty applause.

And it must be said that Jones, much like Frank Sinatra, hasn’t written his own music, and thus his performances provide a walk through the compositions of others. But boy howdy, does he know how to pick em! (Sinatra’s son, Frank Jr., once told me his father had an uncanny ability to select great songs from the pile.) Jones’s choices for covers early on included “The Windmills of Your Mind” by Noel Harrison and “Popstar,” from Cat Stevens. Yet it was “Green, Green Grass of Home” that brought the early part of the show to a high point. My wife, who is English, hasn’t been back to Britannia for nearly years, and thus when Jones sang this bittersweet tune, she stood for its duration—her eyes filled with tears as she sat down, recalling the island of her heritage and the family and friends there.

Jones then tackled another Dylan cover, “One More Cup of Coffee (Valley Below)” before trotting out the evening’s most unusual offering from his most recent album, “Surrounded by Time.” That song, “Talking Reality Television Blues,” was a hellish trip through the all-consuming media landscape that commenced 50 years ago, and has since gone on through the era of O.J. Simpson and Tanya Harding all the way up to a certain ex-president who was known for his stint in reality TV. Jones all but rapped the lyrics as his face appeared on the screen behind him in a matrix of approximately six TVs, with the other fake TVs displaying a variety of familiar images from the television era, from the JFK era up till now, in an MTV collage of ADHD overstimulation. It was a definite highlight, and shows that Jones knows how to embrace the present and its stylings as much as the past.

If there’s one thing Jones knows how to do, it’s tell an old story as if for the first time. Thus he related how during his lengthy career, several times he encountered Prince. Early on, Jones said, the Purple One was, if not diffident, then not precisely friendly. However, later Prince came to regard Jones with not only warmth but genuine affection and admiration. He even invited Jones to record together at Paisley Park, but sadly passed away before that could happen. Nonetheless, to pay homage to the song wizard of Minneapolis, Jones performed a jazzy, downtempo rendition of “Kiss.” In the best traditions of artists at the top of their game covering the work of another, Jones made the song his own; he didn’t attempt to tackle Prince’s falsetto notes nor the frenzied tempo that made the original famous. Jones fashioned something new, with his band backing him up note for note in a fresh iteration of an R&B standard by one of the genre’s most prolific writers. Prince would be proud.

Jones bid the Wolf Trap goodnight, but as he was largely immobile, he chuckled and shared that this was “the part where we normally walk offstage for a drink and then come back.” A roadie simultaneously removed several bras that had been tossed on the stage by wearers who likely bought their first such undergarments in the Johnson administration, but no matter—it’s all in the spirit of fun.

For the “encore,” Jones and his band performed “One Hell of a Life” and “Strange Things Happening Every Day.” Ever the showman, he knew what would bring the evening to a thrilling close, and thus shared that it was time for songs from his own teenage years a week or two in the rearview. He related how, in the early-’70s, his and Elvis Presley’s Vegas show schedules often overlapped, and the two would often hang out in between nightly gigs. (For perhaps one of the most amazing anecdotes from that era, watch Jones discussing his time with Elvis—and a particular trip to the toilet—with Conan O’Brien here.) Jones told the crowd how Elvis invited the Welshman to a different hotel on the Strip where Chuck Berry was performing, with the King of Rock n’ Roll nodding along and telling Jones, “That’s the real king, man!” Only fitting, then, that Jones and his crew performed “Johnny B. Goode,” one of the holiest of all rock tunes. (Jones shared that his guitarist had bought a Berry guitar secondhand, but had left it behind in England.)

With one more round in the chamber, Jones and his merry men positively brought the house down with a cover of Jerry Lee Lewis’s “Great Balls of Fire.” The Killer’s frantic tune was a perfect capper, and brought the appreciative crowd to its feet to dance and sing along one final time as the pianist Milner emphatically tapped out the notes of that wonderful rock classic. One couldn’t help but get the sense that Jones was feeding on the energy of this most energized crowd as much as he was feeding their own joy.

Jones then stood, his cane at the ready, and introduced and thanked each member of his band. The crowd continued cheering as the 82-year-old slowly made his way to the wings and the house lights came up.

Age is just a number, and performing may be a job, but the 82-year-old Welshman approaches it not with the sense of obligation but with gratitude and verve. Someone else might come along and sing as many songs as he has over his career, but there will only ever be one Tom Jones.