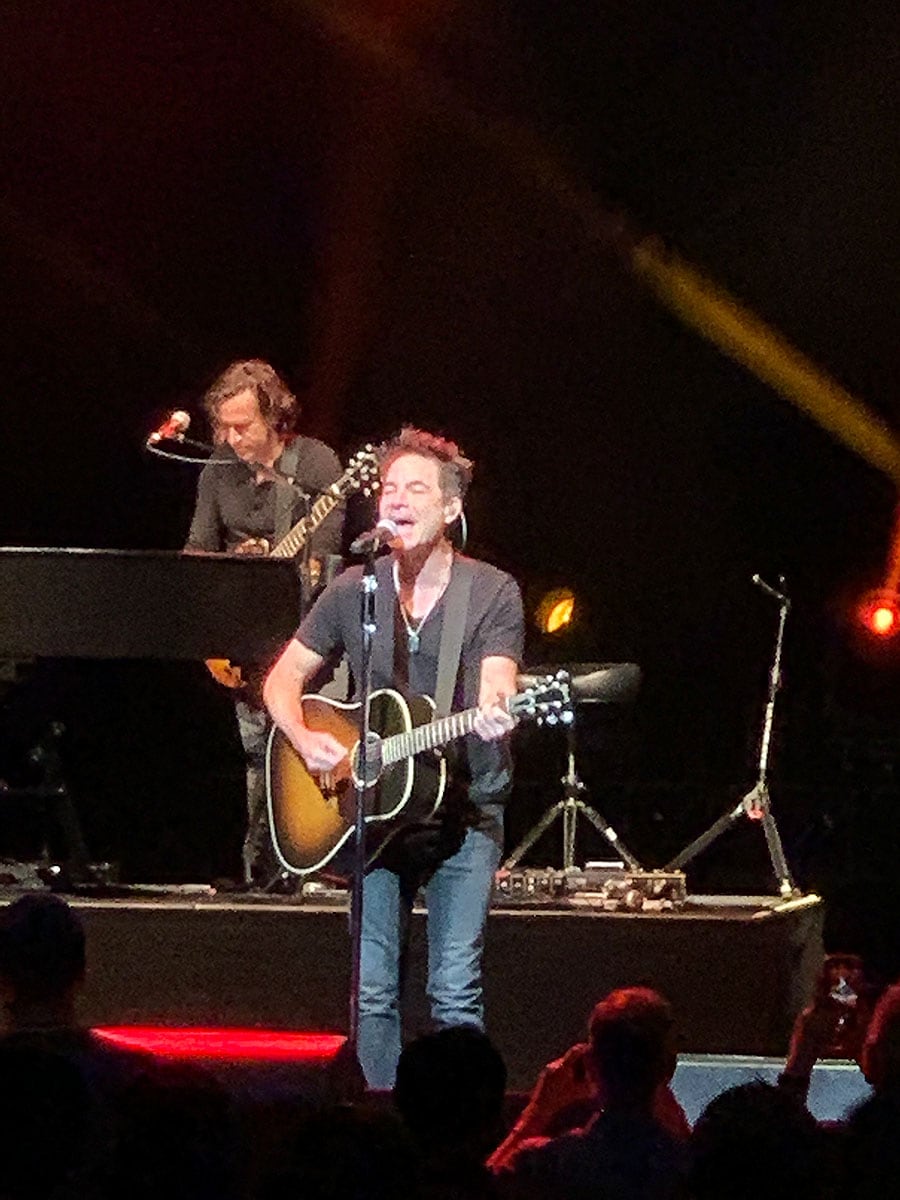 After a rather fine opening set from Vertical Horizon, Pat Monahan and his band Train took to the stage of the Wolf Trap in Vienna, Virginia, Thursday night to a capacity crowd, who were required by the venue to wear masks even outdoors (though several revellers nonetheless grooved out unmasked). Pat Monahan and crew opened with “She’s on Fire,” and the singer and leadman then told the gathered how genuinely pleased he and the gang were to be back performing live.

Monahan then informed the crowd that the set list would be a combination of Train’s seminal tunes as well as various covers, including some songs that highly influenced the band. Immediately the band charged into “Champagne Supernova,” a cover of the Oasis hit from 1996. Monahan took time to introduce lead guitarist Luis Maldonado, who though he has been with the band only since 2016, has clearly found his footing.

The crowd of Virginians was especially vibrant during “Meet Virginia,” with the Old Dominion fans clearly pumped to be referenced in the tune.

The early section had most of the fans on their feet, until came “Mai Tais,” a slower-tempo tune that, despite its visions of paradise, brought the energy down somewhat. But Monahan and crew won them back with “50 Ways to Say Goodbye” and “Angel in Blue Jeans.”

During “Save Me, San Francisco,” a bevy of Train-emblazoned beach bills were tossed from the stage into the crowd, allowing for audience participation of that typical variety. The beach balls stayed around for a medley of “Bruises” and a cover of “Love the One You’re With” before the band then covered the Led Zeppelin staple “Going to California,” a paean to Train’s home state.

Something strange happened during “Marry Me,” Monahan’s signature love song. Just a few rows ahead of me, two older men got into a shouting and shoving match, which required their neighbors to restrain the more aggressive of the two and try to talk him down. The man continued yelling even as he was removed by security. I guess the notion of marriage does that to some folks.

From there it was on to hitsville, with “Play That Song.” Monahan, who once told me has never had a vocal coach, was in fine voice particularly on the high notes required by the song. The evening’s unquestioned high note was “Hey, Soul Sister,” their radio staple that Monahan told me he wrote after tossing out many another song. The energy of band and audience were melded on the song, which somehow was even more vibrant than on the record.

The last cover of the evening was “The Weight” by the Band. Monahan invited Vertical Horizon frontman Matt Scannell to join him for the song, and teased him by saying that Scannell’s mother was in the audience. The two traded off on verses, and bassist Hector Maldonado also did rather well on another.

After “Drive By,” the band returned for a brisk encore, commencing with “Free,” which Monahan said was the first song the band had ever written together. And to pack up the evening, the title track from “Drops of Jupiter,” from the 2001 album of the same name, made a fine sendoff as both the song and the album celebrated their 20th anniversary.

Train remains a band whose catalogue I find uneven, but their concert showed that they maintain control of a crowd and deliver well on their live performances.

May live performances continue—while they still can.