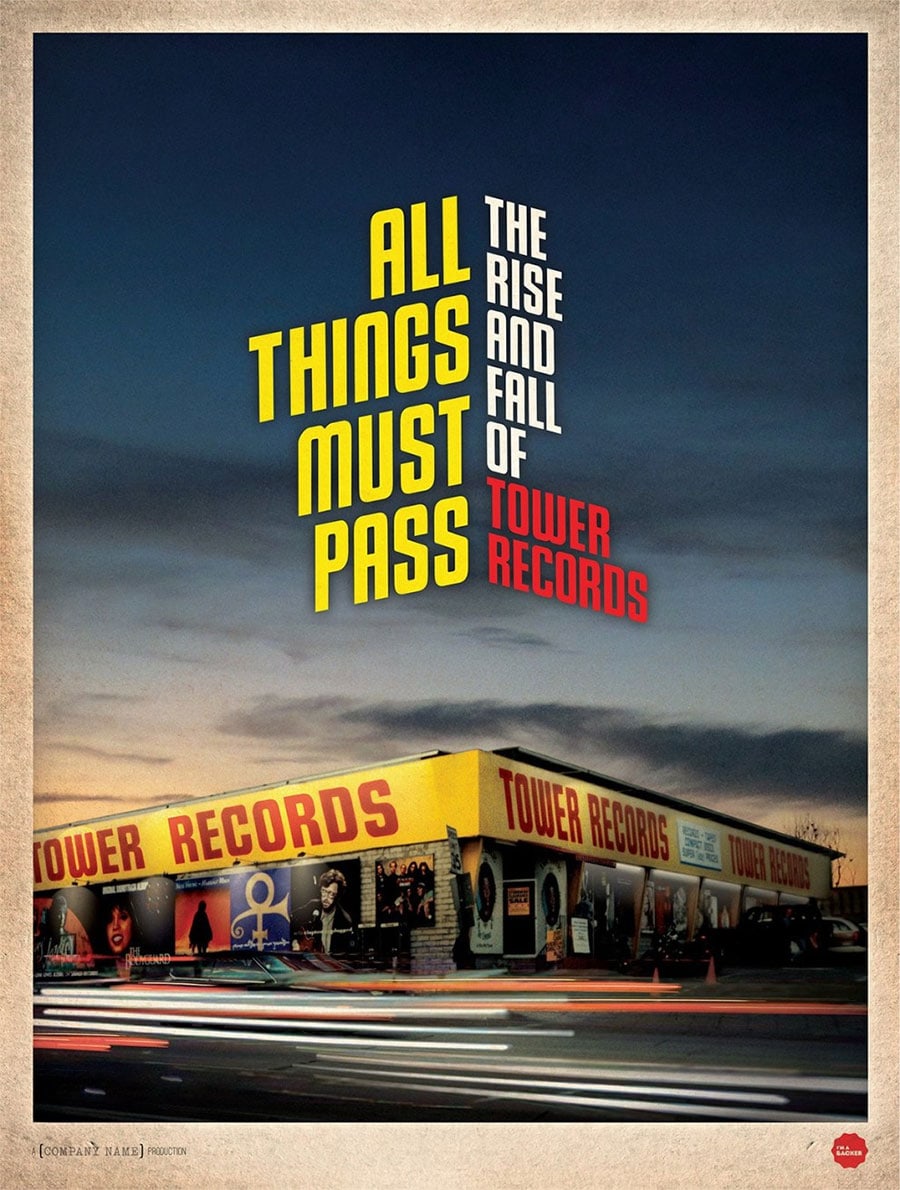 Back before people could buy music right from their phone, you had to take a trip down to the record store to get it. Tower Records was a place for people to stock up on the latest records but also socialize with people that had a similar passion in music. All Things Must Pass is Colin Hanks debut full-length film that features the rise and fall of the once mighty Tower Records. Who would have thought you’d care about employees of a record store by the end of the film?

Tower Records started out in Sacremento, California in 1960 by Russell Solomon. It started out in his father’s drugstore and quickly moved into its own building. The company started out small and eventually grew to be one of the more important stores in the music industry. Anyone could get hired and it was like a party working there at times. Just picture the ‘90s movie Empire Records and you kind of have an idea on how Tower Records used to be back in the 60s and 70s. Just minus Rex Manning day. The company kept growing and growing, expanded overseas and Japan. With all good things, things have to come to an end sooner or later. The company filed for bankruptcy in 2006 and closed its stores for good in the States. While the Internet certainly played a part of it’s demise, there’s more to the story than just that.

I never really been to a Tower Records store until the 1990s. I loved listening to music since an early age but I was too little to go out and buy records myself. When I got into punk and ska in the late 90s, I would always be on the hunt for new music and rare imports as well. My brothers (or parents) and I would drive down to Tower Records on Route 17 in Paramus, NJ. We didn’t have a Tower close by so you had to make half a day out of it and then just wander around it for hours. I’d look for new (or rare) music, be a wiseass and rearrange albums in the wrong sections and also checked out the magazines & zines. Honestly, looking at the zine section of Tower Records is how I started this website 18 years ago. I just got inspired and wanted to do what they were doing. For me, Tower Records wasn’t the only store I had to visit. There was a local shop near me called Rock Fantasy that would blare hair metal all the time and have pinball machines in the back. Another mecca for me was Vintage Vinyl in Fords, NJ. That was a trek but they carried the most punk and ska, especially imports. So with all that said, I was really interested in seeing this documentary because I was a record store kid. You can really tell Colin Hanks was the same way. I just didn’t like records/LPs and mainly bought CDs. I’m still not a fan of vinyl but with its comeback, I’m a little surprised Tower Records hasn’t found it’s way to come back to the US in some fashion besides having a website.

Colin doesn’t have a narrator for the documentary and uses the interview soundbites to tell the story. It seems like Russell Solomon could have talked and talked for hours. Instead of having just musicians be the main focal point, Hanks focuses on the people that built the company from the ground up. However, there are some interviews with former store clerk Dave Grohl and Sir Elton John who is considered Tower’s biggest shopper. Colin and company spent 7 years making the documentary, including a Kickstarter campaign halfway through to secure more funding. You can tell a lot of work went into this, with lots of old footage and pictures of Solomon and employees. Over the 100 minutes, you get to know some of the people that ran Tower and why it meant so much to them. You can’t help but feel bad for them when they were eventually fired. Towards the end of the company’s run, someone came in and cut positions and it still didn’t help things in the end. After many years, people are still upset over how things went down. The Internet certainly played a part in Tower’s demise but it was the way the company was being run that it just lost money. Plus, other retail stores coming in across the street with half the prices that Tower had. Much to my surprise, Tower Records still exists online and in Japan, and few other countries.

What I like about All Things Must Pass is that’s just not a documentary about Tower Records and its employees. It’s almost like watching history before our eyes with the way the music industry was. Record sales dominated, people would flock the stores and get their $3.95 records. Then sales slipped and people got sick of LPs and disco. CDs and MTV came into the picture and sales picked up for many years. Then the Internet and illegal file-sharing programs like Napster popped up and changed the industry again. David Geffen had a great quote in the film. He said something along the lines that record labels and stores could have made albums cheaper to help compete with the Internet and they just didn’t. I agree, labels and stores never adapted and are still trying to find a way to adapt. They had the “let’s just sue everybody” approach, yet people still stole. But that’s another rant for another time.

Tower Records wasn’t just your usual record store. It was a place to hang out with fellow music lovers, long-haired kids could get a job there, and it was a place for artists to showcase their albums and take pride by being focused on the walls outside. Colin Hanks has directed an excellent documentary with heart and one that will make music lovers crave those days again. Well maybe not the $20 album prices but the atmosphere of going to a store, socializing with humans in-person, and buying music that you can hold in your hand.

Bottom Line: Colin Hanks has directed an excellent documentary with a heart. This is so much more than just a film about a record store.
Running Time: 100 mins
Rating: NR
Overall Rating: