When you pump out sequels every other year, they start to get watered down and not as good as the others, and that’s what it is for this movie. Though the movie was still funny and some scenes were gross; It still felt like things were lacking such as editing, story, and original characters not coming back.


The story begins when Jim (Jason Biggs) proposes to Michelle (Alyson Hannigan) the band geek, his girlfriend of 3 years. He stills hangs out with Kevin and Finch, and tries to stay away from Stifler (Seann William Scott) but he ends up showing up and annoying Jim. Lots of other original cast members aren’t in this, and even though I don’t like Chris Klein, Tara Reid, and Mena Suvari in the other ones; they should have made an appearance at the wedding or at least been referenced. The only reference to someone in the previous movies was Nadia, and she wasn’t in this movie either. But if she’s not gonna get naked, what point is she in the film then? Just like the second movie, she was useless haha. Though friends do change and people move on so maybe that’s what happen with all their characters? Who knows, it wasn’t mentioned so you have to leave that to your imagination. Back to the story, While the wedding plans are happening, Michelle’s younger sister Cadence (January Jones) arrives. Stifler and Finch (Eddie Kaye Thomas) battle each other to get her. Michelle’s parents show up and Jim has to make a big impression on them, which he hasn’t yet. The movie was lacking in various departments.

The story revolved around Stifler too much, and Seann Willam Scott seemed like he acted way over the top in this one or was trying too much. I think he was in the movie as much as he was because he didn’t want to come back to do America Wedding. Most likely it was unless he had a lot to do in the next film and take up a lot of the screen time. I think it’s pretty bad when I find myself saying Stifler was cursing way too much, since I curse like a sailor. It was like every other word and it just sounded dumb after awhile. But maybe that’s what he was going for haha. But his character in this seems different than the previous movies, I can’t put my finger on it but it’s something.

The story felt like it was basically about him and not about Jim & Michelle. But don’t get me wrong, I still like his character and crack up a lot of the things he says and does. Mainly the reason is because one of my best friends acts just like him and he has been told that by many people. Another area the movie was lacking in was editing. It was all over the place at times and just felt like leftovers spliced together or scenes just added in for a cheap joke. Also another problem with American Wedding, or with all comedies is showing too much in the trailers and commercials. The grandma scene was ruined because of that, and people in the audience were annoyingly screaming out the butt of jokes before they happened. In the commercials, they should show the main plot and maybe a few jokes or two and that will get the crowd there. Besides, people know the story & characters already and that will bring them back to the theaters. With all the negatives out of the way, the movie still had it’s fair share of grossed out humor and jokes.

I think I almost barfed during one scene involving Stifler. I wouldn’t be surprised if you read that in the newspaper that someone did blow chunks while watching that scene. One addition to the cast that I liked was character actor Eddie Allan Kramer, who was Little John in Robin Hood: Men In Tights. All his scenes were hilarious and it was a change of pace from the usual characters who delivered the punch lines. I liked all the fighting between Stifler and Finch again, and I liked how Stifler and him were having their own little contest. Kevin was basically didn’t do anything, but at least he showed up to be in the movie haha. Alyson Hannigan did a fine job with the screen time given to her. I wish they gave her more because she’s such a cutey pie and it was supposed to be about her and Jim right? Eugene Levy is still excellent as Jim Dad, and Fred Willard & Deborah Rush joined the cast as Michelle’s parents. Fred Willard is always funny at the roles he does. I really liked the bachelor party scene, but wish it had more nudity in it haha. It had that cringe feeling to it the entire time from what was happening on screen, it was great. I think the DVD will have a lot of material added back into the movie and I hope it helps out the story and makes the movie flow a little bit better.

The movie has it’s problems but I still enjoyed watching it. Believe it or not, I think the second one is the best out of the series, and I think America Wedding is my least favorite. The second film still felt like it belonged in the series and the story & characters were still the same. This time, it felt like a different movie with choppy editing and parts of the plot weren’t that great either. I think I have to see it again at a better theater since the sound was crackling, and hopefully there won’t be assholes talking during the movie, then maybe I’ll enjoy the movie a lot more. 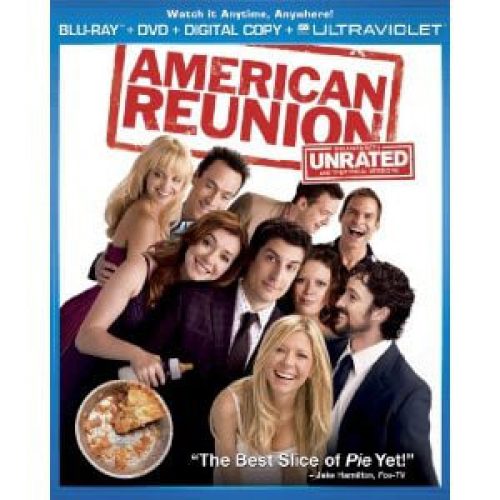