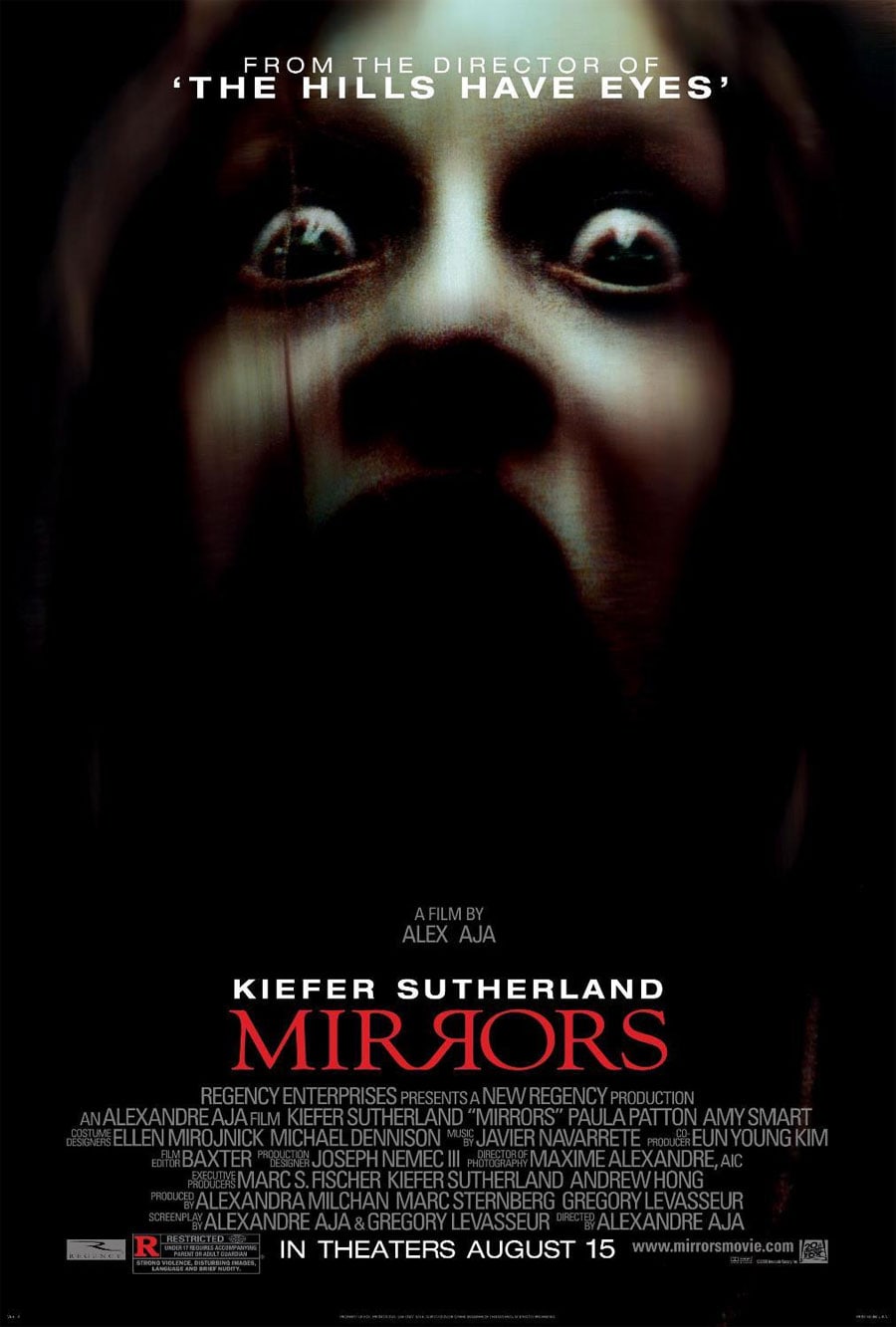 Starring: Kiefer Sutherland, Amy Smart
Written By: Alexandre Aja, Grgory Levasseur
Directed By: Alexandre Aja
I didn’t hear about this movie until about two weeks before it came out, but once I did, I couldn’t be more excited to see it. Kiefer Sutherland…in a horror movie?! This sounds amazing! The Red Band trailer was amazingly gory and the story was finally something that was a little different.

From director Alexandre Aja (The Hills Have Eyes remake, High Tention), Mirrors is a remake of a Korean horror flick called Into the Mirror (which I haven’t seen…yet). It’s finally a remake that isn’t at all cheesy or just plain awful. So I was pleasantly surprised. Then again, Aja did an amazing job on The Hills Have Eyes, so it’s not too surprising.

Former NYPD detective Ben Carson (Sutherland) gets a job working as a security guard at a burned down, once prestigious department store that’s in the works of being remodeled. After his first night of working, he soon discovers that this place isn’t what he expected. Mysterious hand prints on mirrors that he can’t seem to clean off, voices, and visions in the mirrors that aren’t there in reality.

Soon enough, the horror with the mirrors starts affecting his family. Starting with an extremely disturbing scene dealing with his sister, Angela (Smart) and a bathtub. I admit, I, one of the biggest horror fans out there, was a bit grossed out. Then continues with his wife and two children. And the scene to top all scenes…something I never thought I would see in a horror movie happened. Let’s just say I’m sure the born again Jesus freaks are going to shit themselves over this one.

The gore scenes are fantastically done. They’re disturbing, and I was certainly too scared to look at ANY mirror I came across after seeing this movie. The acting was great for a horror movie, and like I said before, the story was something nice and new for us horror fans to enjoy.

There’s SO much about this movie that I’d love to just keep talking about, but I don’t want to spoil anything for those of you who want to go see it. I will say, Kiefer just can’t get away from the whole Jack Bauer type role. The whole time I just kept thinking “So is THIS what Jack would do when faced with the paranormal?” But hey, that’s not a bad thing.

This movie is worth checking out. Especially if you’re a fan of Aja’s other two films. I loved it, and can’t wait until it’s on DVD!