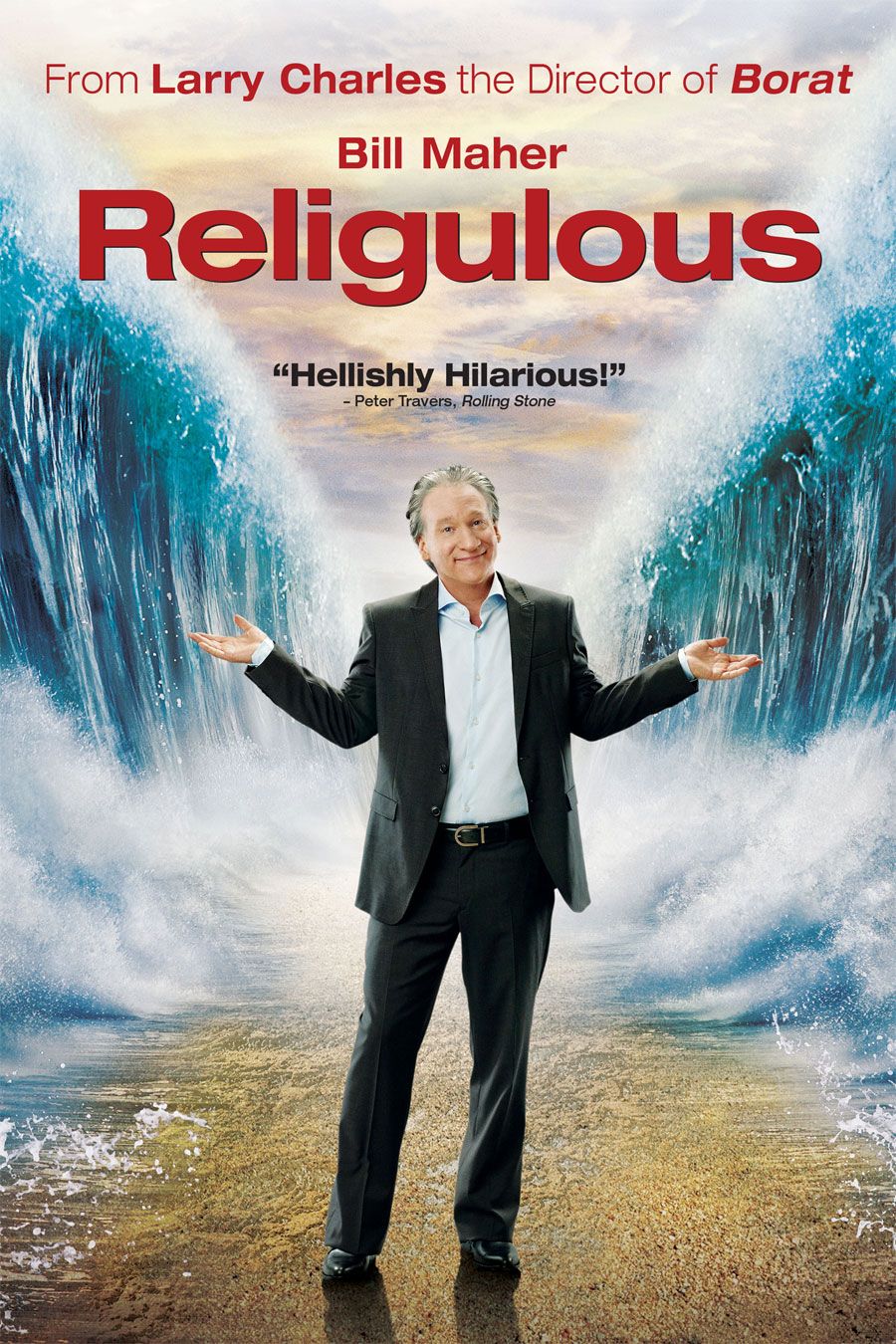 Starring Bill Maher, Larry Charles, and Religious people
Written By: Bill Maher
Directed By: Larry Charles
If George Carlin wasn’t going to make a documentary about ridiculous religions, I knew Bill Maher would. Religulous is a hilarious, informative and very interesting documentary that will make agnostics & atheists laugh their heads off. This movie will either piss you off or it will make religious people question their beliefs. I thought this movie was great and I hope Bill Maher and Larry Charles make a sequel!


Religulous is a documentary comedy that stars political comedian Bill Maher as he goes on a journey to ask questions about various religions. He travels to Jerusalem, The Vatican, Salt Lake City, down South in the USA and other religious areas and places. At those places, he interviews religious believers and gets their take on what they believe. His goal isnt to totally debunk other peoples beliefs, but to see if people can factually back them up. He tries to hear their side of things, even though he questions everything they bring up. The main groups that Bill targets is: Christians, Catholics, Muslims, Mormons, Scientologists, Jews for Jesus, and Hasidic Jews. Obviously Bill Maher is agnostic and doesnt know what to believe, and that shows in the film. Anyone whos seen his TV shows or his standup should know that. So when Maher shows up to interview people, you can see it in their faces that they felt tricked. Besides interviewing religious people, Bill also talks about his upbringing and why he feels the way he does about religion.

Bill Maher and George Carlins views on religion pretty much sums up my thinking as well. Personally, I never went to church and I thank my parents for that. The only times I have stepped in a church were for Christenings or weddings/funerals (and most of the time I escaped to the parking lot). My parents wanted me to discover my beliefs on my own and I did. I dont like/believe in organized religion and dont believe in any of that. I can see why people believe in something and why religion exists, its just not for me.

With that out of the way, I thought Religulous was a great take on religion and it made me laugh out loud in the theater a whole lot. The way that Maher & Charles present religion makes it quite silly and makes the people that believe in it very gullible. The cut-away footage of religious programming and films was gut busting hilarious. Seeing preachers talk in tongues/gibberish was great and Im scratching my head as to why people would actually believe anything that comes out those morons mouths. I thought Bill Maher was surprisingly laid back to his usual self and let others present their case. Im sure other people dont agree with me on that statement. Of course there were times when Maher said something mean or offensive. For the most part, he let the people make themselves look foolish.

I can see why Maher mainly focused on Christianity and Catholicism, since thats what he knows the most about. But it would have been nice for him to go into Hinduism, Buddhism, Taoism, Rastafarianism, and other religions. I thought he might go into Judaism, Islam or Scientology more but he only just touched upon the surface. Can we say sequel? He talked about those religions and interviewed believers in those religions but it seemed like there wasnt enough focus on them. Maher dresses up like a looney in Hyde Park in London and spouts off stuff from Scientology. It was funny to see that no one recognized Maher, and theyre probably use to the crazies that go to the Speakers Corner every Sunday to spout off their nonsense. Bill Maher walks out of an interview with an Hasidic Jew, which takes place in Monsey, NY (I played in an ice hockey league there). Some of the other highlights for me were seeing Maher attend the Holy Land Experience in Orlando, the trucker stop chapel, ex-homosexual interview, and hearing from people that work at the Vatican. If youre offended by Maher attacking your religion, without a doubt youll be laughing with him as he attacks another.

For me, Religulous is successful in that its a thought-provoking documentary and really funny at the same time. Its hard to mix the two but Bill Maher and Larry Charles succeed. Some people might not even want to see this but if you ever second-guessed your beliefs, you might want to check this out. But if youre also looking to find an outrageous comedy to see, Religulous might be that movie.