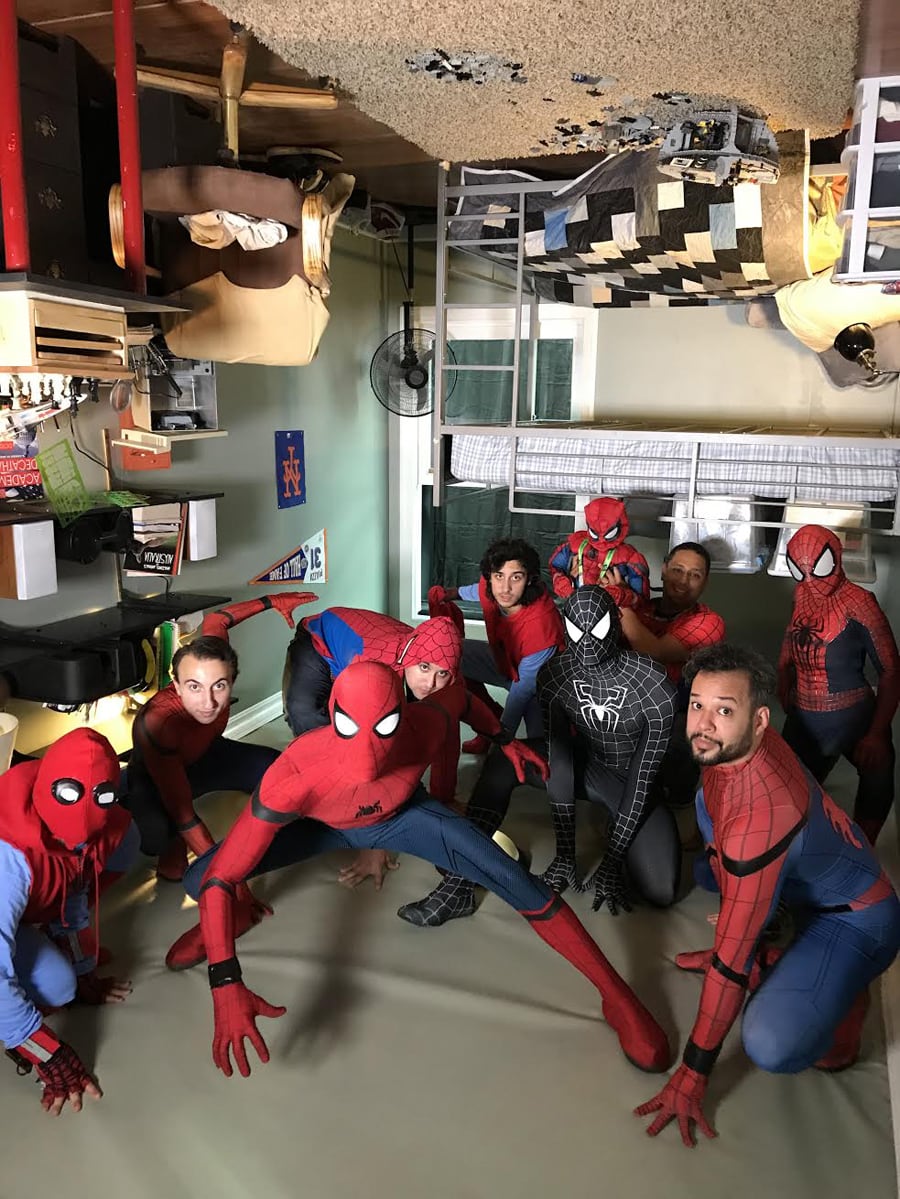 This year was the third time that I’ve been fortunate enough to attend the New York Comic Con, but the first time that I’ve been able to cover it with a press pass. While I wish it was all fun and games, I had some actual work to do and some lines to stand in for various reasons. I will have some interviews from the convention posted up at a later time. For now this is my NYCC 2017 experience.

Knowing that the lines would be long for entrance into the NYCC, we decided to get up early and walk the couple of blocks from our hotel to the convention center. For the first time in a long time I was meeting up with the Readjunk crew and was going to hang with them at the convention as much as we could. My friend and I met up with Readjunk Ray for a hearty breakfast at a diner close by. After breakfast we had to split up and go to different entrances since they had day passes and I had a press badge. They ended up getting in sooner than I did because they were holding back the will-call and press holders for some unknown reason. Once I entered I wanted to scope out the location of the Lego BrickHeadz truck since I had won the lottery for the opportunity to purchase exclusives from them at 12:30. Once I found the location and met up with my party we had a couple of hours to scope out the place.

With Thursday being the “lightest” of days there were still a lot of people crowding every aisle, booth and exhibit. I scoped out a few more locations for places that I had to be for some press coverage and headed back to the Lego BrickHeadz truck to get my place in line. The truck was located outside in the sweltering heat and had a line of about 60 some people ahead of me. It was there that we met up with the fabulous owner of Readjunk Bryan who makes all of the free stuff that I get possible. Once the line started moving it didn’t take that long to get through and purchase the NYCC exclusive which just happened to be a Star Wars set that featured a BrickHeadz version of Boba Fett with Han Solo encased in carbonite. If it was anything other than that in the Star Wars universe I most likely would have passed but they had me at carbonite. 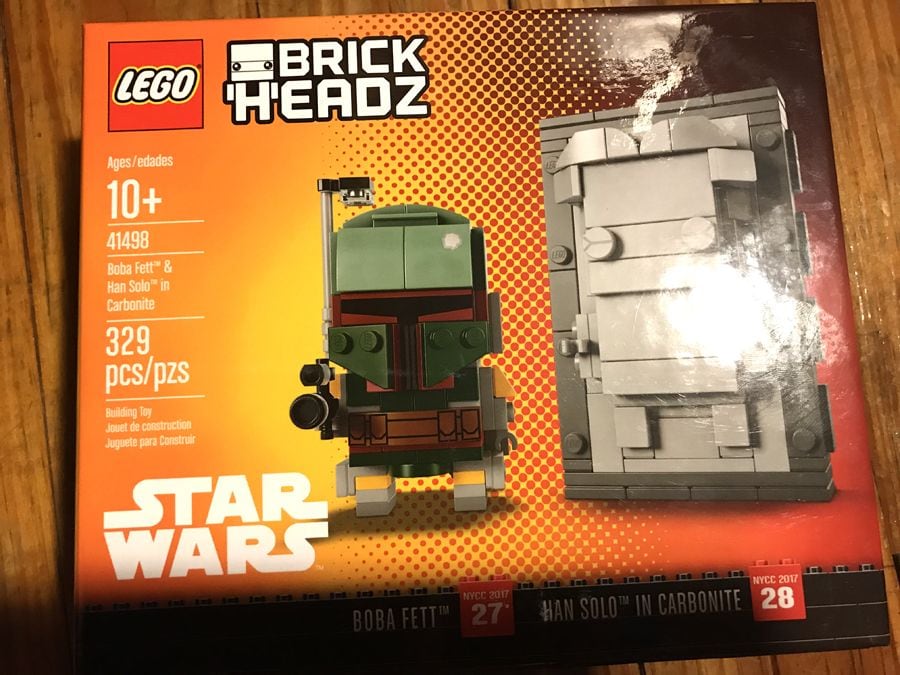 From here on out for most of the rest of the day, my work schedule had kicked in. I had a VIP reservation for a “Spider-Man: Homecoming” experience. It was pretty cool since I had my press reservation I was able to skip the lines and go right in. I had to crawl in through a window and entered into a mockup of Peter Parker’s bedroom from “Homecoming”. I crawled through like Spidey, struck a pose and continued to the exit. I figured that I would receive a picture of my Spidey pose buy instead was sent a video of my entire entrance. It was a neat little experience and I even got a bonus gold ticket afterwards that was for a signing by Jacob Batalon who played Ned Leeds in “Spider-Man: Homecoming”. That was a fun little surprise. Thankfully the signing went quickly since I had to find the press lounge and get set for a DC Animated roundtable interview. 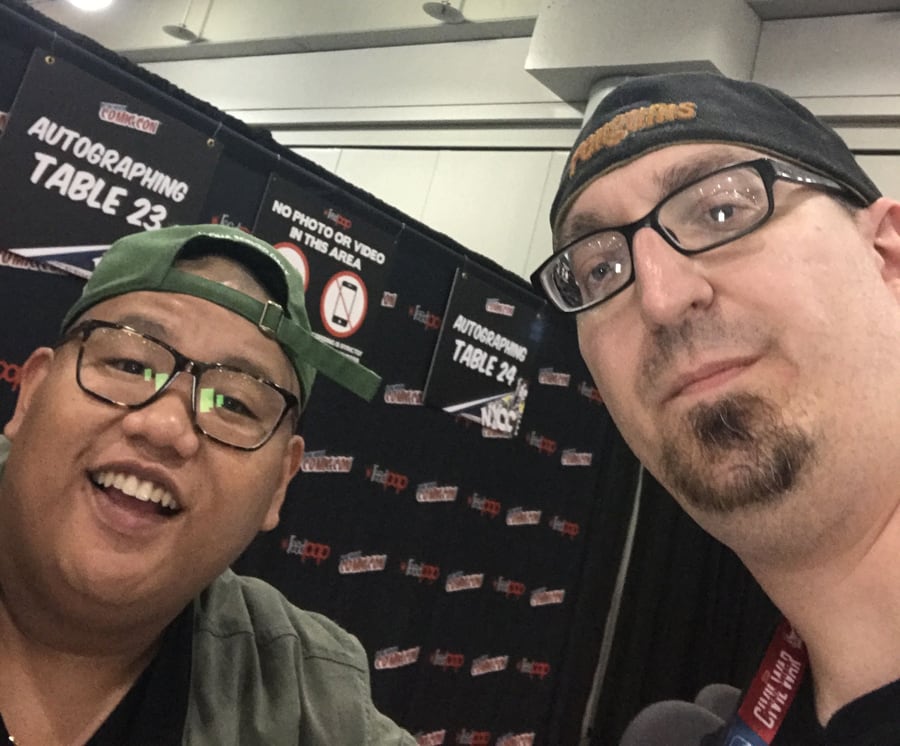 The Jacob Batalon signing was on the first floor and the press lounge was on the fourth floor but the map was confusing and I had no idea how to actually get to the fourth floor. Let’s say that the Javits Center employees were less than helpful and didn’t even know there was a press lounge. I spotted the escalators for the fan lounge and figured that hey, it goes up so maybe that’s a start. There were no signs pointing to a fourth floor anywhere that I could see but the press lounge was thankfully close to the fan lounge being just a short escalator ride up from the third and a half floor. Scrambling around to locate Press Room 3 I had to ask around much to my dismay but found it by process of elimination. I ended up being on time, but barely.

Being my first time actually having insider coverage for the New York Comic Con, I was unsure of the process and procedures of the roundtable interviews that I was participating in but everything was very intimidate and casual. The first roundtable interview that I had scheduled was for the “DC Universe Original Movies 10th Anniversary” which is an upcoming Blu-Ray box set that contains a whopping 30 DC animated movies from the past 10 years from “Superman vs Doomsday” up to and including “Batman and Harley Quinn”. Appearing at the tables for discussion were key figures involved in the DC animated universe including Jason O’Mara (voice of Batman), Vanessa Marshall (voice of Wonder Woman), producer James Tucker, writer/producer Alan Burnett, writer/producer Jim Krieg and last but not least…Bruce Timm. For those who aren’t in the know, Bruce Timm is the driving force behind the entire DC animated universe having created “Batman: The Animated Series”, “Batman Beyond”, “Justice League: The Animated Series”/”Justice League: Unlimited”, “Superman: The Animated Series” and most of the animated movies found within the 10th Anniversary set. While I was cool on the outside, I was absolutely geeking out at the opportunity to sit face to face and discuss the DC animated universe with those that made it possible in the first place. Everyone at the table was thoughtful and respectful to everyone that was participating. 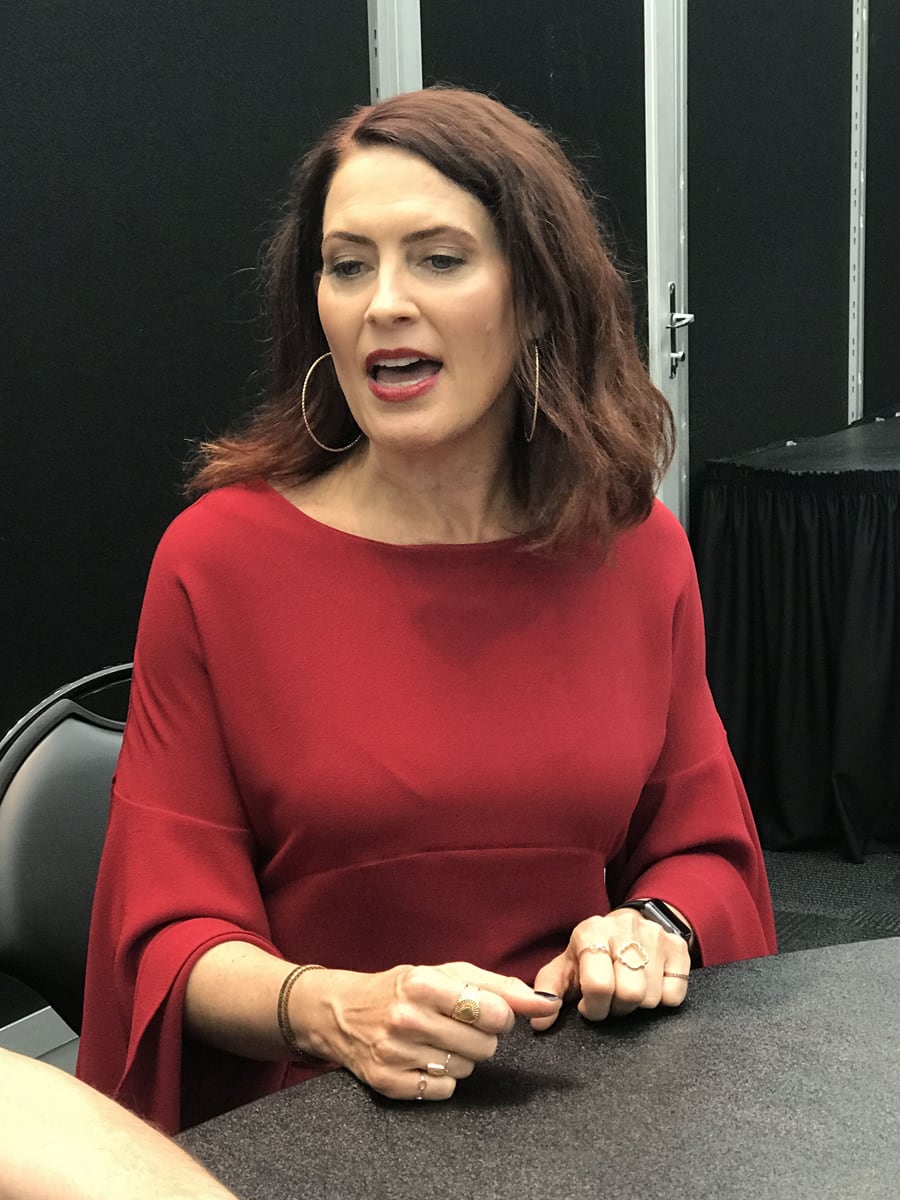 After the roundtable interviews, it was on the panel for the “DC Universe Original Movies 10th Anniversary”. Another press perk was receiving a VIP bracelet for reserved seating up front for the panel. Everyone from the roundtable interviews was onstage for the panel as well as some other important players from the DC animated universe including Tara Strong, John DiMaggio and…the seminal voice of Batman since “Batman: The Animated Series”…Kevin Conroy! The panel consisted of questions asked by Gary Miereanu, lead publicist for the DC animated universe, to the panel guests. They talked about their favorite DC animated movies, moments and behind the scene happenings, discussed the 10th Anniversary boxed set in detail and opened up the floor for questions from the fans with four lucky question-givers receiving posters signed by everyone on the panel. 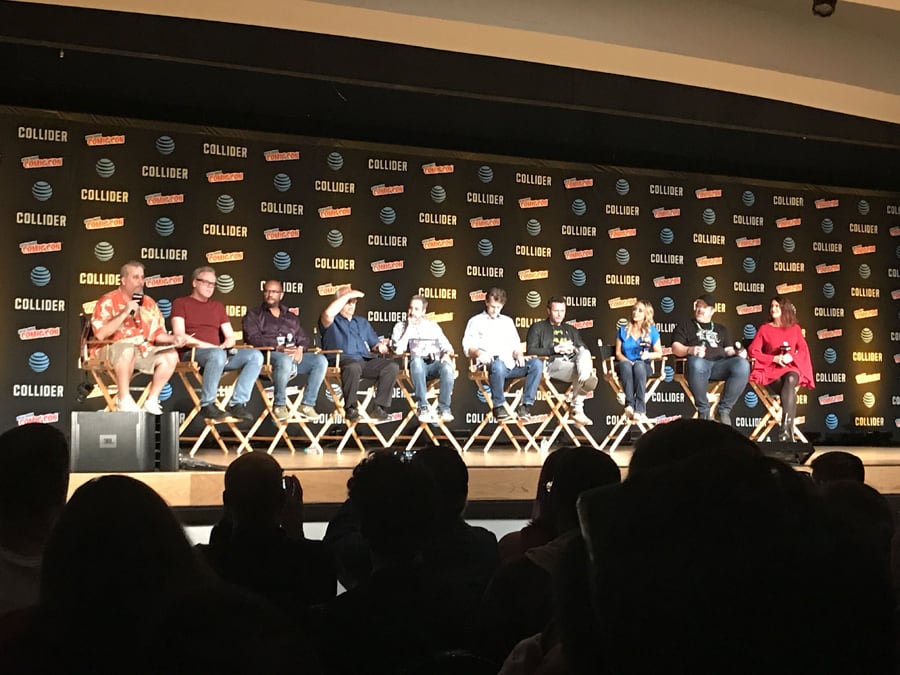 With my interviews and panels finished up, I was able to meet up with my friends once again and roam the floors for a few more hours until things closed up. I managed to pick up some autographs on some of my comic books from Art Adams and Erik Larsen! Both were talkative and seemed to be enjoying themselves and it was fun to watch Erik Larsen do a sketch cover drawing for someone. He has such a unique drawing and inking style and was really cool to see in person. I also managed to pick up some random comic goodies from a couple of booths on the main floor.

With the day winding down, a few of us headed a few streets down to a self-serve pizza place called Rocky’s on 34th Street for a New York pizza pie. It was great to wind down with some friends, chat for a few hours about our experiences that day and just hang out before we say our goodbyes for another year or so. Soon enough it was time to head to the hotel and wind down for the night in preparation for Day 2 on Friday. 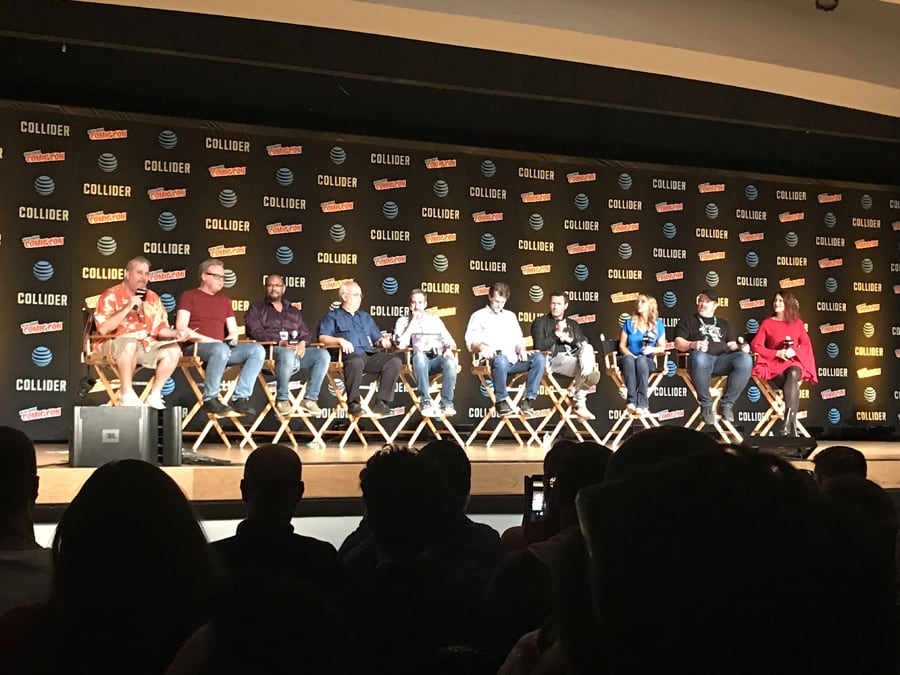 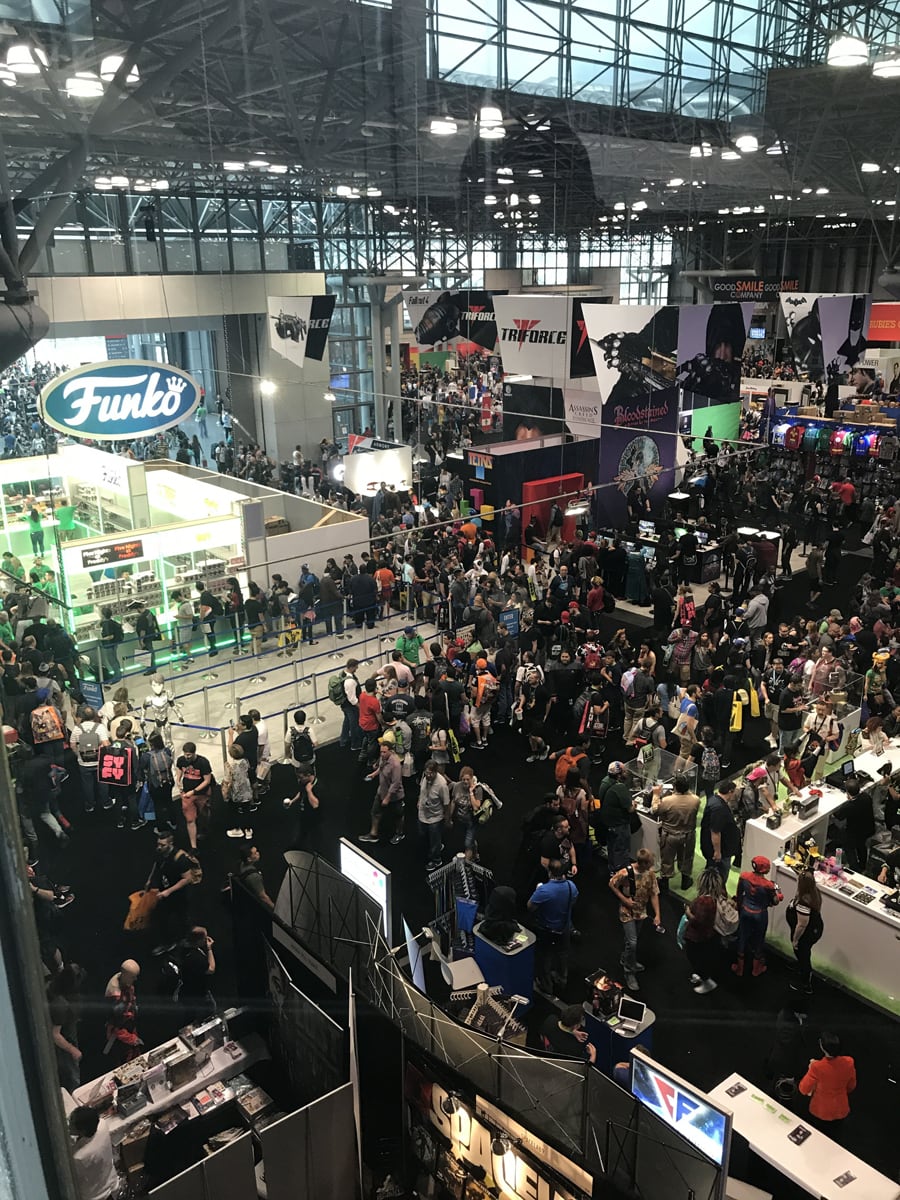 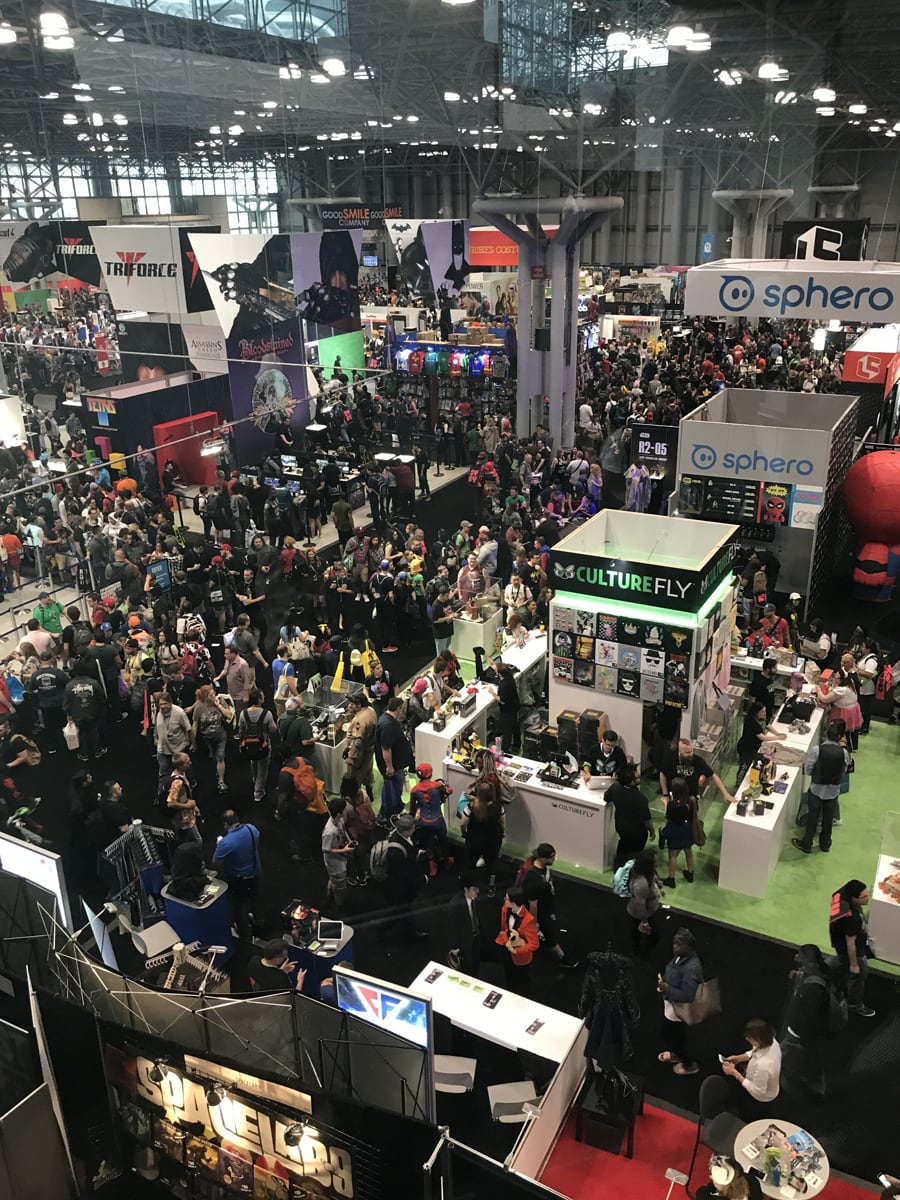 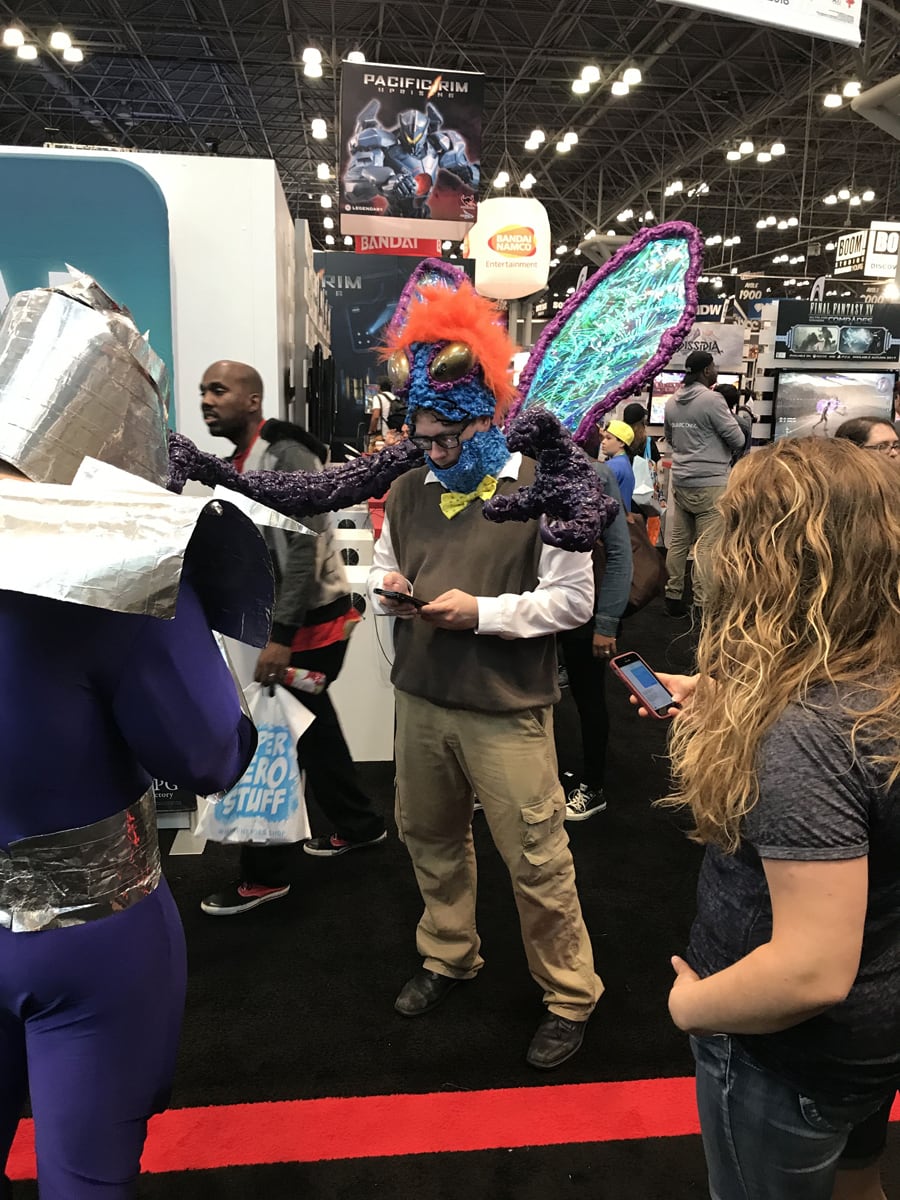 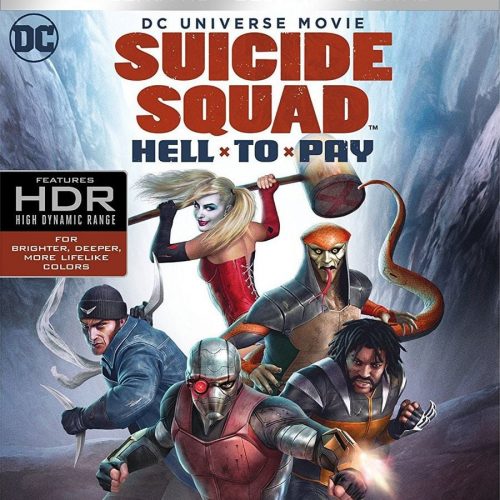 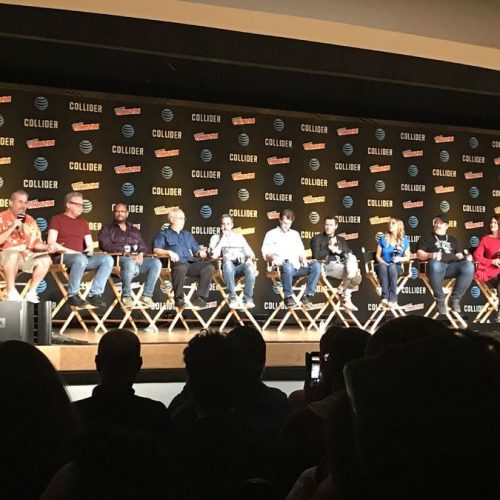