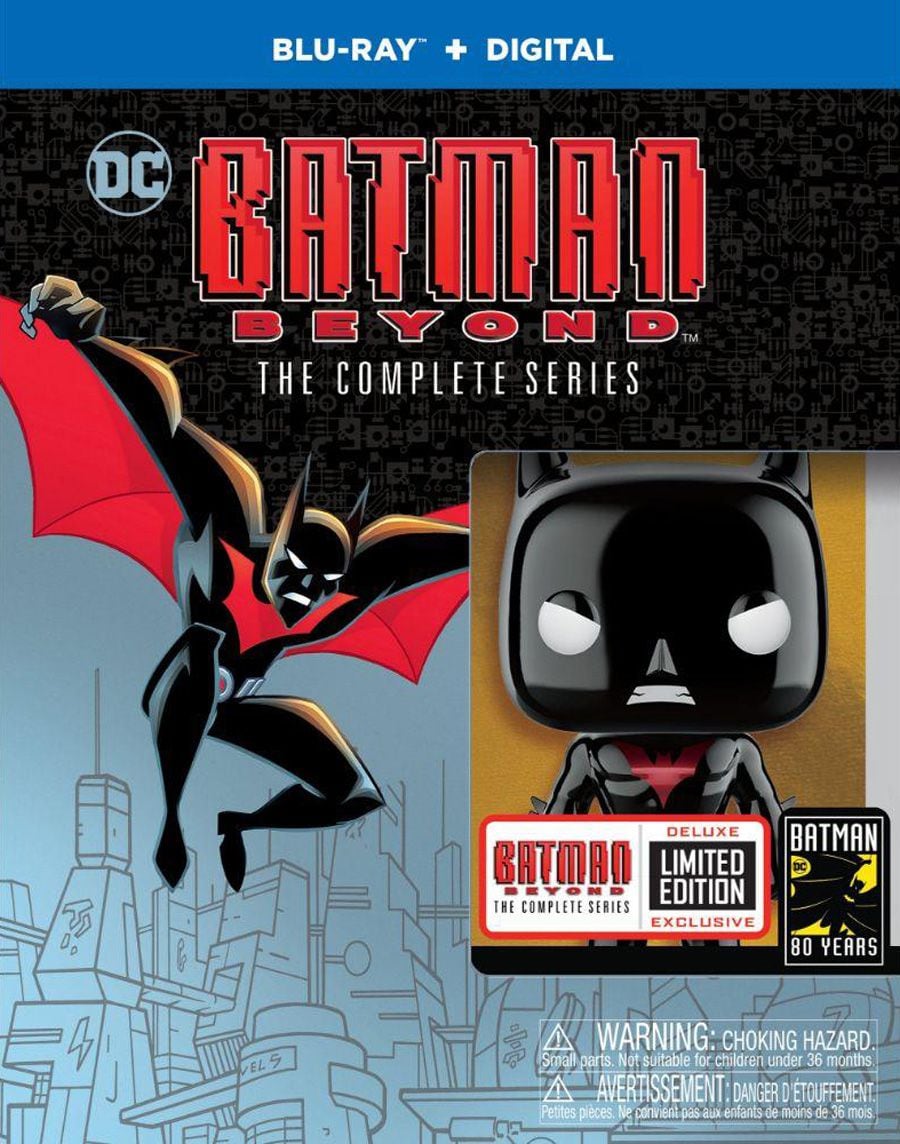 Fifty years in the future, Gotham City has become a technological mecha, crime has risen once again but this time there is no Batman to save the day…or is there?

Towards the end of “Batman: The Animated Series” development began on a new series to draw in the younger crowd that might not have been mature enough at the time to understand and appreciate “B:TAS”. “Batman Beyond” was announced to a mixed reaction amongst fans. They didn’t want “B:TAS” to end and fought hard against the idea of a teenage Batman long before the show even aired, which is typical of fanboys and fangirls. And then “Batman Beyond” finally aired.

The first two episodes aired on January 10, 1999 and was a two-parter titled “Rebirth”. In that episode, we’re shown Bruce Wayne 20 years older going up against a group of kidnappers and extortionists in a completely new and different Batman suit. Gone are the blue and gray colors as well as the cape…in place of those things is a sleek all black suit with a red bat symbol on the center chest. Instead of a utility belt, the suit itself is one big utility belt as Batman forms batarangs from mere thought, has limited flight capabilities and red glider wings hidden under his arms.

As he faces off against these thugs in hopes of saving a young girl from their clutches, he gets outnumbered and beaten down after clutching his heart. Lying on the ground next to him is one of the thug’s guns. Hesitant to pick it up, in this life and death situation, he goes against everything that he ever had and will ever stand for…and reluctantly grabs the gun, pointing it at the thugs. They run away as we see Batman throw off his mask, revealing an aged Bruce Wayne who stumbles away into the dark. That is the last that the world will see of the Batman for the next thirty years. The first five minutes of “Batman Beyond” set the tone for the entire series and instantly hooked many naysayers for the long run. Now nearly 10 years after the complete series release on DVD, and nearly exactly a year after the complete “Batman: The Animated Series” release on Blu-ray, we finally get the proper release of the complete series of “Batman Beyond” to celebrate its 20th anniversary.

Much like the release of “Batman: The Animated Series”, Warner Bros. teamed up with Funko to add a bonus to the series release. Not only does the set come with some lenticular art cards but it also includes an exclusive metallic Batman Beyond Funko Pop! found only in the set. Since the collectors set is numbered and limited to 50,000 that makes the Pop! a decent edition to a Pop! collectors stash. To compare the collectors set to the release of the complete “Batman: The Animated Series”, you not only get every episode of “Batman Beyond” but you also get the uncut version of “Batman Beyond: Return of the Joker”. “Return of the Joker” is one of the best Batman stories…comics, movies, or television…that was ever told in my opinion and was an absolute must have addition to the set. On top of all of those goodies, we finally get the series on digital HD for use on your favorite digital streaming service.

This boxed set includes all 52 episodes of “Batman Beyond” as well as the uncut and remastered version of “Batman Beyond: Return of the Joker” but one thing that is curious about the set is the fact that 11 episodes of the show were upscaled from digital images and not fully remastered like the other 41 episodes. Apparently those 11 upscaled episodes are due to the degradation of the original time-worn film source. While definitely not a game-breaker for those looking to purchase the set, you will notice a difference on those particular episodes which include “Eyewitness,” “Final Cut,” “The Last Resort,” “Armory,” “Sneak Peek,” “The Eggbaby,” “Zeta,” “Plague,” “April Moon,” “Sentries of the Lost Cosmos” and “Speak No Evil.” While the only other way to watch those episodes before this release was on the DVD sets, it is an improvement.

Not to forget the extra features that are included in the box set, it’s chuck full of features both new and old. All of the features that were included on the original DVD releases such as interviews with cast and crew are included once again as well as some brand new features such as a roundtable interview with Bruce Timm, Kevin Conroy, Andrea Romano and Will Friedle among others and a documentary celebrating the 80 year history and legacy of Batman.

There’s not much else that I can say about this set except that, if you grew up in the 90s on “Batman: The Animated Series”, you enjoy excellent animation and storytelling or you’re a fan of anything Batman…you owe it to yourself to add this to your collection. The tale of Terry McGinnis taking the mantle of the Bat was and still is a fresh take on the Dark Knight that still resonates in the realm of comics and animation…and it looks much prettier than ever before!!!

Bottom Line: “Batman: The Animated Series” is one of the best animated shows of all time and “Batman Beyond” was sometimes hidden behind its shadow much like the other Bruce Timm DC animated shows. It was underrated and misperceived in its early days but thankfully, 20 years later it can stand on its own legacy as something that is just as important and influential as its predecessor.