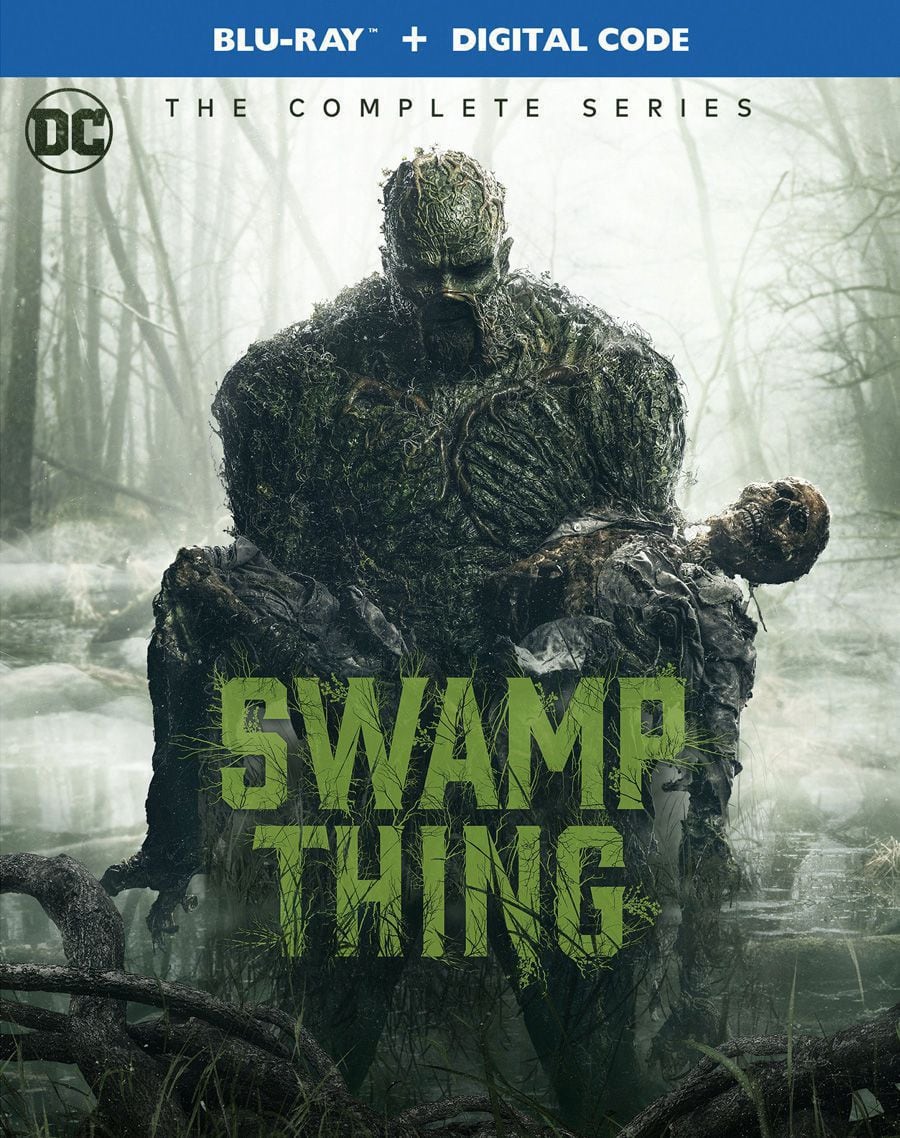 Abby Arcane returns home to Marais, Louisiana to investigate a deadly swamp-borne virus, only to discover the dark, terrifying mysteries of the swamp.

Following in the footsteps of the pair of previous shows on the DC Universe streaming service, “Swamp Thing” keeps things true to the characters with a series that is heavy on the supernatural and horror elements that are integral to the character. While the other shows are continuing on, “Swamp Thing” was over before it starting, with the show being cancelled after the airing of the first episode. Overall, there weren’t too many issues with wrapping up the series although it did still end on somewhat of a cliffhanger or more like a taste of things that would have come.

Since everything from the entire series is collected in this set, that being 10 full episodes, the show got to focus on what it had instead of what will happen next. For those not familiar with the character or who may only know him from a pair of movies and a USA Network TV show, Swamp Thing is the creation of elements of a supernatural swamp seeking an avatar to end its suffering at the hands of humans as well as the horrific mixture of a chemicals, death and an unfortunate human. While there have been various humans to have taken the form of Swamp Thing, the most common and the one used for the series is Alec Holland played by Andy Bean.

With no mention of Anton Arcane in the DC Universe show, we are thankfully given Abigail Arcane, a doctor investigating a mysterious outbreak in the town that she hoped to escape from for good. Instead of Anton Arcane, the show introduces Avery Sunderland as the main antagonist, portrayed excellently by Will Patton. Most of the origins of the characters on the show are drastically different than in the comics, I was happy with the fresh take on the characters that the average viewer never heard of in the first place.

Following the introduction of and subsequent death of Alec Holland by the hands of a mysterious stranger, the show weaved a tale of mystery, horror and intrigue. Abby Arcane, true to her morals and her work in preventing an outbreak, navigates the persons of interest in her hometown while trying to stay out of their crosshairs. The key residents of her backwater Louisiana hometown are straight out of a Stephen King novel while the terrors of the swamp bring a feel of a John Carpenter movie to the table.

With Abby figuring out who she can trust or not…spoiler, she can’t trust that many people where she’s from…she discovers that there is a creature in the swamp and comes to the conclusion that Alec Holland may still be alive. Whatever he has become may be the key to curing the epidemic among the citizens. But once others learn of the thing in the swamp, they seek it out for their own twisted and corrupted means.

“Swamp Thing” had the perfect mixture of horror and supernatural elements while also maintaining its comic book roots. There are important story elements over the course of the series that focus on some of Swamp Thing’s major comic book allies such as Madame Xanadu, the Phantom Stranger and Blue Devil, played by Ian Ziering of “Sharknado” fame. The directors and writers also did well to include some tributes to the comic books with scenes taken straight from comic book panels as well as a few tributes to the 80s movies.

With my introduction to Swamp Thing due to the 80s movies, the animated series and the TV show, I found myself at ground zero for some of the best comic book runs of the character throughout the late 80s and early 90s and he’s maintained a standing as one of my all-time favorite comic book characters. Going into my initial viewing of the new series, I was somewhat skeptical, possibly a little biased and definitely excited. After the odd cancellation of the show, I figured that I shouldn’t expect much from the remainder of the series. Fortunately, that didn’t seem to affect the other 9 episodes. The series had definite comic book influences and captured the nature of the character of the most popular version of him. Towards the end of the series, there were some unresolved plot points but nothing major other than the mutation of a certain misguided scientist into a very comic accurate version of the Floronic Man. If the show were to continue, there would have absolutely been a classic comic book style story arc revolving around those two enemies but alas, it was not to be.

If you’ve ever viewed any of the live-action Swamp Thing material out there or have been following the shows on the DC streaming service or enjoy the supernatural, horror films or things that go bump in the swamp, “Swamp Thing: The Complete Series” is a must watch. It is absolutely the definitive live-action version of the character and, although short-lived, did more justice to the character than anything outside of the comic books that has come before. It’s a standalone series that fits nicely into its single season package.

Bottom Line: The definitive version of Swamp Thing has come to life in this series. Whether you’re familiar with the character or not, this series brings the character to life and tells an intriguing horror mystery with a dab of comic book goodness. A slight disappointment for the lack of any extra features on this release. I’m sure there would have been something to include as a bonus.