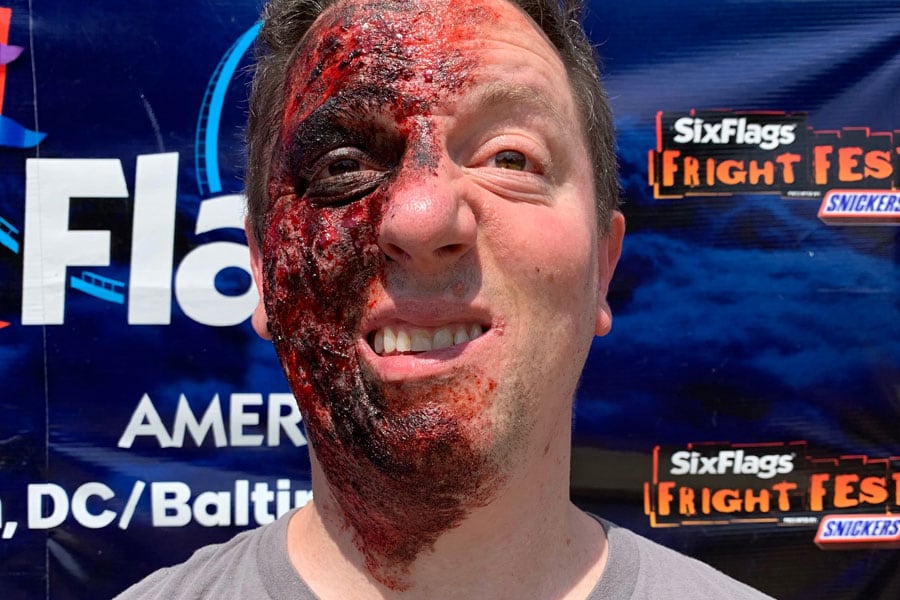 I always wanted to be a ghoul. Or a zombie. Or some other version of the undead. And thanks to makeup artist Shayla Gamble, at Six Flags America in Upper Marlboro, Maryland, Thursday, I had my chance.

Set on the amusement park’s “Circle Stage,” I sat for nearly an hour Thursday-under a rather unkind August sun—as local makeup artist Gamble, who trained in New York, transformed me from mild-mannered reporter into an unfortunate creature of the damned.

It was part of the preparation for “National Scare Day,” wherein Six Flags parks around the country are inviting auditioners to try out their “best” scare faces and whatever other stage tricks they might have in their bag of tricks in anticipation of this year’s annual “Fright Fest,” the nocturnal scare bacchanal that presages each Halloween. 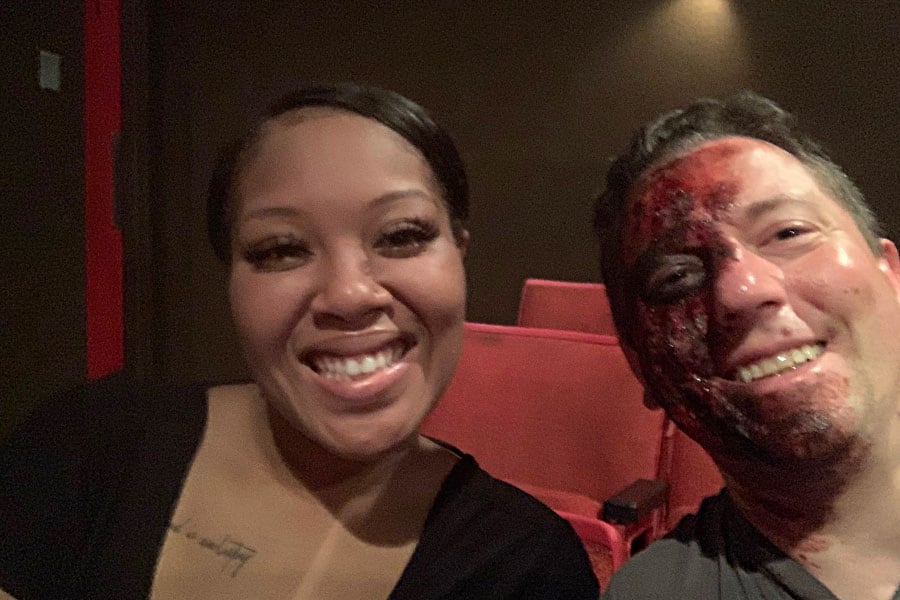 “I’m half-hoping I get pulled over on the way home,” I said during my Facebook Live broadcast. “‘Sorry, officer, rough day at the office. Cannibalism just doesn’t pay what it used to.’”

I was told by Ashley, a HR rep for Six Flags America, during my makeup test, that they encourage participants to come up with their own characters, so I (half) jokingly said that I would be a penniless writer, going “wooooo” and telling kids in high school “This is what happens when you study journalism!
It was also an exercise in patience. It’s one thing to sit in air-conditioned comfort as artisans transform you into something unholy; it’s quite another when you’re seated 100 or so feet from the main entrance to Six Flags with park visitors stopping to stare. I sweat—a lot—and as each layer of makeup was applied, it seemed to trap more of the moisture closer to my skin, making me feel cooler. 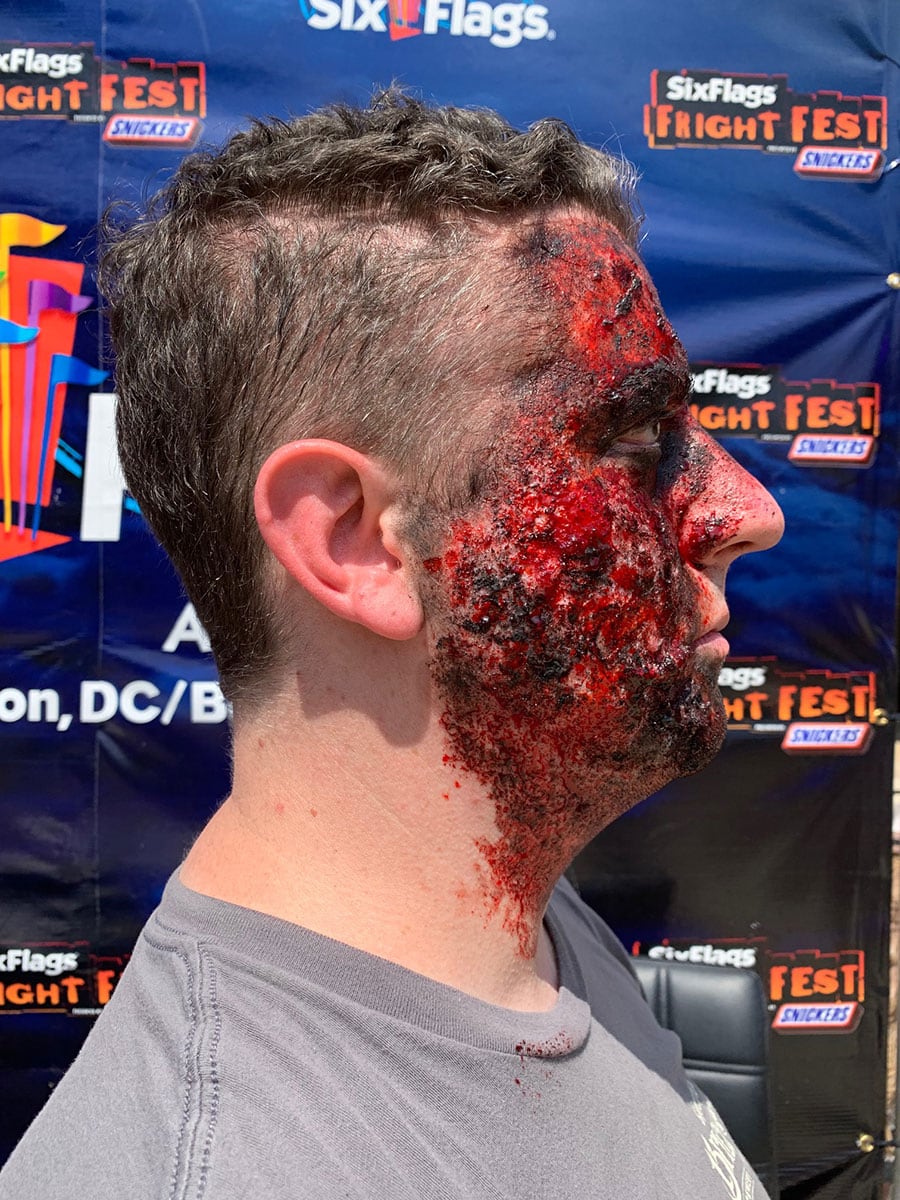 That is, until the fake blood was applied. Sitting out in the sun, the red phony gore actually felt somewhat hot to my skin was it was applied as faux injuries. And it was also a new experience to have eye makeup applied around my right eye to make my eye skin “puff” as if in response to serious injury. (My fiancee later helped me with makeup eye remover.)

I couldn’t help but recalling when Anderson Cooper was transformed into a White Walker for a recent segment of “60 Minutes.” What you all saw was the final product in time-compressed fast-forward. It’s a lot different when you’re sitting in a chair for nearly an hour just to get half of your face attached with gore.

I also recalled something from the DVD of the 1989 version of “Batman,” in which Michael Keaton related that Jack Nicholson, a famous man about town, would party all night near the film’s London set, show up before dawn in the makeup trailer, say, “Hey, Mike!” sit down in his makeup chair, and proceed to pass out for hours as he was transformed into the Joker.

The end result was a bit like Two-Face: Half of my healthy visage was transformed into the grotesque, with the other half remaining “normal.” Perhaps all I needed was a coin. 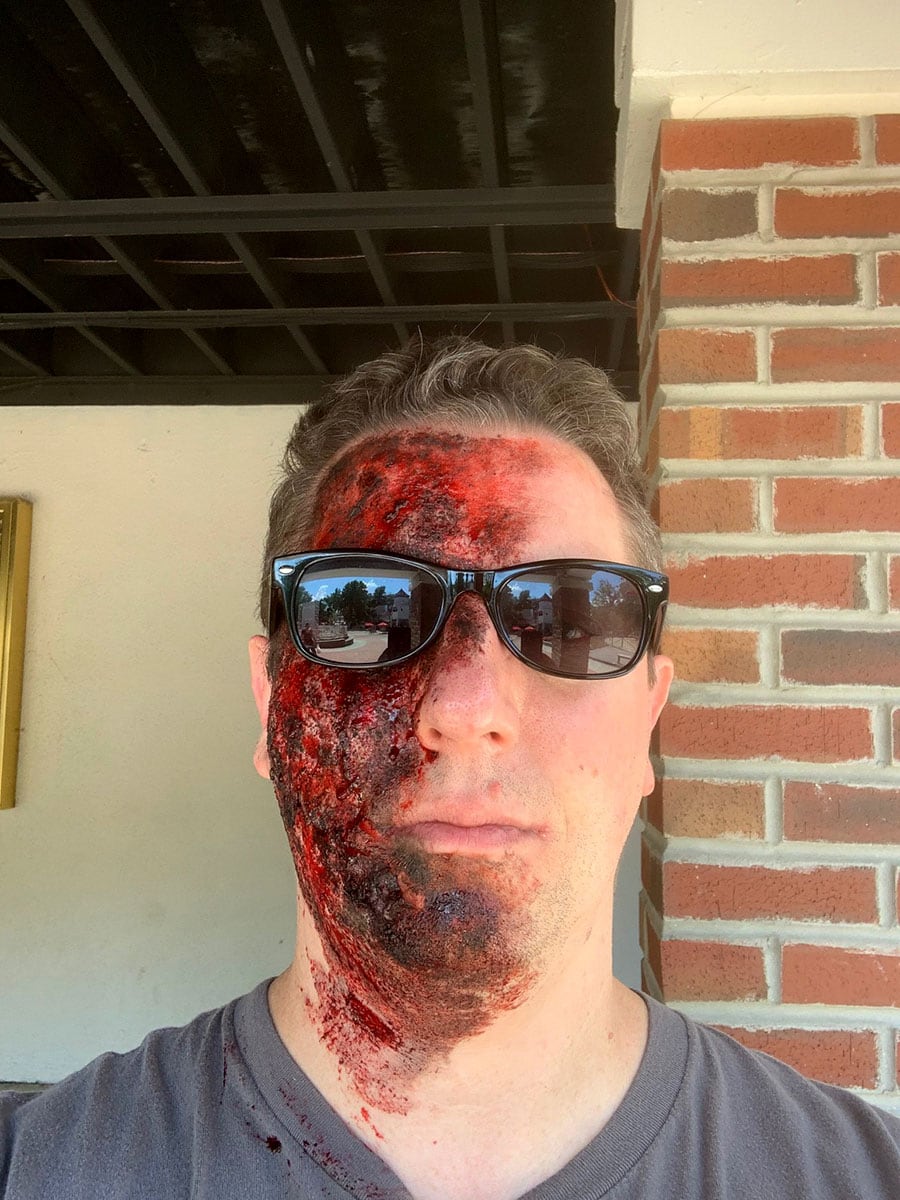 Later, as Shayla walked me to another area to get un-undeaded, a Six Flags patron watched me pass and had only one word to offer: “Gross!”

I took it as a compliment, both of my seeming awfulness in zombie makeup and of Shayla’s skills with her implements.

To learn how you too can become a creature of the night for fun—and pay—for Fright Fest this year, visit https://sixflags.com/greatamerica/special-events/hiring-events. 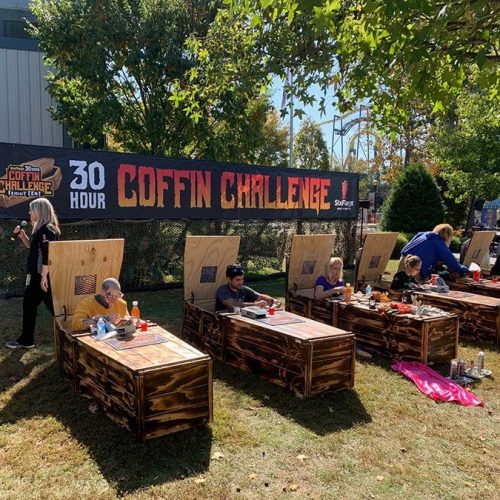 The Six Flags 30 Hour Coffin Challenge – Do You Think You Can Do It?