Did you guys name the band after Spud Mckenzie?
Who is Spud McKenzie? Listen, if ye wanna talks about DOGS son, you’d better interview a veterinarian. i’m a punkrocker!

How did the Real Mckenzie’s get together?
We were all drinking whisky (a group of Canadian Scottish) telling stories of the things our Scottish parents made us do. After laughing a lot about this, I had the idea to mix these old Scottish songs in a new way…Punkrock (my favorite). That was the birth of TRM’s back in the ’92. So we all put on our kilts & started making cd’s & touring the world.

Do you guys pretend to be Scottish because you saw Braveheart and decided that was cool?
We don’t pretend to be anything! (see question #2) ’95- Braveheart. ’92- The Real McKenzies

What’s scarier – the Loch Ness monster or your bagpipe player naked?
I can’t tell ye laddie! They both seem equally horrifying to me.

What are some bands that stand out in today’s music scene?
Which “scene”? There seems to be a few. To tell you the truth, we’ve been so busy touring & recording lately it’s sort of difficult to keep up with all of them. Perhaps you’re referring to “our scene”. Which is, of course, “The modern underground independent scene”. There are far too many bands we like & they all contribute to the scene a lot. Full kudos to all.

What band member can play the most instruments? Skin flute doesn’t count.
We can all play a few instruments. (The skin flute not being one of them)

What can we look for on the new album coming out in the Spring?
Lot’s of drinkin’ songs (coz that’s one of our hobbies) Some shit about history, old Scottish songs, smokin’ punkrock & guitars. And of course excellent bagpipes.

What book are you reading right now? what’s it about?
Grey Seas Under. published 1960 by farley Mowat (an award-winning Cdn. author) about a gorgeous sea going salvage & rescue tugboat. 156 ft w/ a 1200 horsepower steam driven engine. She & her crew operated in the North Atlantic rescuing & re-floating disabled ships from 1930 till the early 50’s.

What do you do in your spare time?
We have a big slotcar set we like to race on. We have some trick cars, it’s portable & we can set it up in hotel rooms. This provides us with gregarious adolescent behavior. It’s just as much fun as to watch a race.

I’m going to give you a person’s name, and you give me a word to describe them:

Anything else to comment on, plug, promote, etc?
Thanks for the interesting interview. We will be looking forward to playing punkrock & recording & partying with our friends. See you all at the show!! 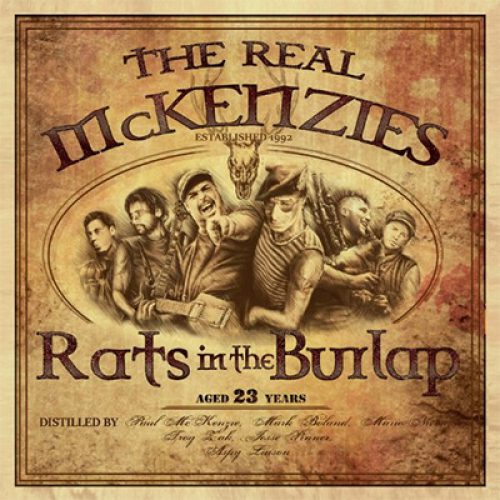 The Real Mckenzies – “Rats in the Burlap”