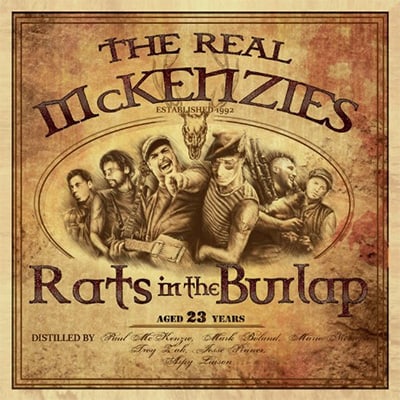 The latest Real Mckenzies album is out now on Fat Wreck Chords and fans of the band will be happy to know this album is better than their previous album.

The Canadian Scots start things off perfectly with “Wha Saw the 42nd.” Stomping, clapping ruckus Celtic punk anthem that is a stand out track. Rats in the Burlap is the band’s 9th album and I’m always looking forward to hearing new music from them. I didn’t really care for Westwinds that much but I think this one steers the ship back.

Other tracks (‘Who’d A Thought,” “Midnight Train to Moscow”) are straight up punk rock and I’m okay with that. There’s bagpipes in the tracks but they aren’t prominent as other tracks. Another standout track is “Yes,” which the band made a fun music video for. I also like the song “You Wanna Know What” because it has the whistle on it instead of the pipes. You gotta switch things up every now and then. “Bootsy the Haggis-Eating Cat” is another song where they switch things up and it comes across like a smoky jazz club kind of song. Rats in the Burlap just has more of a variety than their previous album.

The album mostly has a lot of great tunes and ones I could listen to over and over. There’s maybe 1 or 2 songs I will probably skip but that’s like that for any album I listen to. Glad to see Real Mckenzies rebounded after Westwinds, where there just wasn’t that many notable songs on it.

Bottom Line: Better album than Westwinds but not as good as Oot & Aboot
Notable Tracks: Wha Saw The 42nd, Who’d A Thought, Yes, You Wanna Know What, Catch Me
Overall Rating: