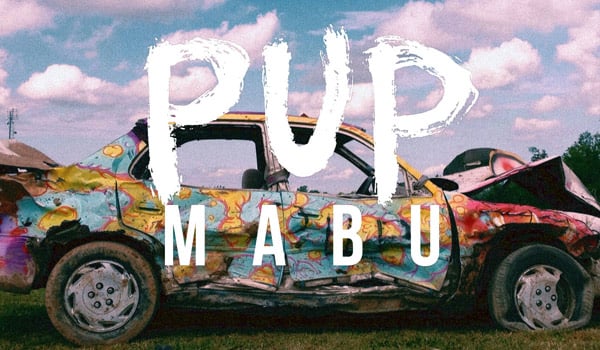 PUP’s newest music video for “Mabu” premiered on SPIN today. The video consists of the band wrecking a car and driving it in a demolition derby. Just drive the car in Jersey City, it will get wrecked or stolen before you know it!

When singer/guitarist Stefan Babcock realized his most prized possession, a beat up champagne-colored 96’ Toyota Camry named Mabu, was on its last leg, he knew he had to send her out in style. So naturally, he signed Mabu up for a real demolition derby and the rest is… well, just watch the video!

Directed by Menno Versteeg of Canadian indie rock band Hollerado and guest starring Wade MacNeil of Gallows/Alexisonfire as the priest who helps bid Mabu her final adieu, the video is the perfect sendoff for a car that held so many memories for Babcock. Speaking of memories, Stefan actually came in second place in the demolition derby that day!

SPIN first premiered “Guilt Trip” back in February, calling it full of “glorious shout-alongs, beefy riffs, bursts of feedback and furious energy.” The song is the massive opening track to PUP’s self-titled debut album produced by Dave Schiffman (The Bronx, Weezer, Nine Inch Nails). Since it’s April release, the rave reviews have continued to flood in; Noisey calls it “a perfect ten” and are currently sponsoring the bands fall headlining tour; BrooklynVegan claims it’s “catchy, anthemic and raw as hell”, Stereogum named PUP one of their Bands To Watch and Consequence Of Sound declare in their review that “PUP make punk rock effortless.”