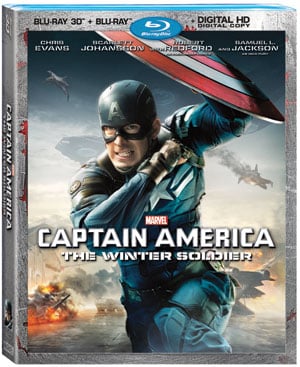 Captain America: The Winter Soldier was an amazing movie, and one of the best comic book movies of all-time. X-Men: Days of Future Past and The Avengers are certainly considered that in my mind as well. The movie will be released on September 9th on Blu-Ray 3D combo pack and all that junk. It will be available early via digital release on August 19th as well. Looking forward to seeing this again!

Own The Movie That Changed Everything, along with Exclusive Bonus Features!
Get it First on Digital 3D and Digital HD, plus Disney Movies Anywhere August 19th, and on 3D Combo Pack, Blu-ray, DVD and On-Demand September 9th

BURBANK, Calif. May 30, 2014— From the studio that brought you the biggest Super Hero movie of all time, Marvel’s The Avengers, comes this year’s #1 live-action adventure, Marvel’s Captain America: The Winter Soldier, available early on Digital 3D and HD August 19th, 2014, and on 3D Blu-ray Combo Pack, Blu-ray, DVD and On-Demand September 9th, 2014, from Walt Disney Studios Home Entertainment. Saluted by critics as “action-packed” (NY Daily News), “thrilling” (Cinema Blend) and “better than The Avengers” (Access Hollywood), this blockbuster second chapter in the Captain America series teams Marvel’s First Avenger, Captain America, with Black Widow and new ally The Falcon as they battle their most mysterious and powerful enemy yet, the Winter Soldier.

Bring home the movie that changed everything and expand your Marvel collection in the following formats with bonus features as listed:

Social Media:
Stay connected with the latest news and information about Marvel’s Captain America: The Winter Soldier:
· “Like” us on Facebook: www.facebook.com/CaptainAmerica