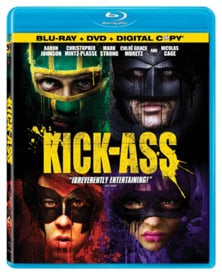 Kick-Ass was a kick-ass comic book flick and it should do very well on video when it comes out on August 3rd, from Lionsgate. After all, all the clueless parents can buy all the DVDs and Blu-Rays for their 3 years old all they want. It would be nice to have an extended cut of this movie, but not sure that’s gonna happen. I loved the movie but wish they didn’t show so much in the red band trailers and commercials.

This film about unlikely real-life crime fighters will also be available on DVD, Digital Download and On Demand. Co-written and directed by Matthew Vaughn (upcoming X-Men: First Class), the ass-kicking adventure is more than just an action film, as it combines a unique sense of humor, powerful storyline, and sometimes shocking violence with impressive performances by a talented cast of both young actors and on-screen veterans. The film stars Aaron Johnson (Nowhere Boy), Christopher Mintz-Plasse (Superbad) and Mark Strong (Robin Hood, Sherlock Holmes), along with the dynamic father-daughter duo played by Chloë Grace Moretz (upcoming Let Me In), and Nicolas Cage (National Treasure series).

Based on the comic written by Mark Millar and John S. Romita JR, “Hit Girl,”, “Big Daddy” and the do-it-yourself superheroes make their way to your home with super DVD special features, including audio commentary, art archives and the featurette “It’s On! The Comic Book Origin of Kick-Ass.” The Blu-ray Disc Combo Pack kicks even harder with the same DVD special features plus a documentary length “making-of” and a feature-length “Ass-Kicking Bonus View Mode,” which give audiences an inside look at all elements of the filmmaking process.

In addition, the Metamenu Remote powered by BD Touch, another Blu-ray exclusive, will allow for iPhone OS and Android users to personalize their experience with this state-of-the-art free app. Once connected through BD-Live, viewers can select menus using intuitive gestures, find scenes by dialogue, discover details about the actors and more. With headphones, they can select to listen in alternate language tracks, or enjoy other synchronized content including portions of the “Ass-Kicking Bonus View” (which users can take “to go” on their mobile device). The high-octane phenomenon invades shelves and homes on August 3rd for the suggested retail price of $39.99 for the Blu-ray Combo Pack and $29.95 on DVD. 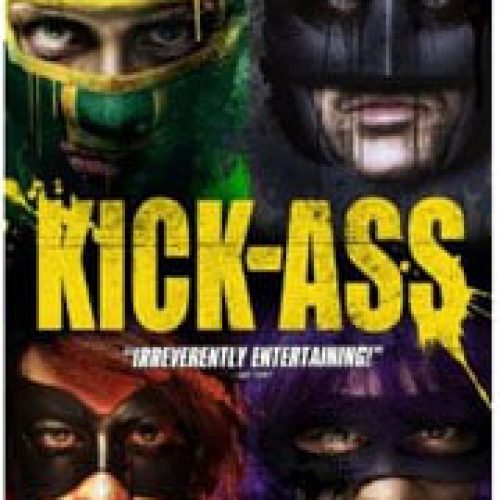