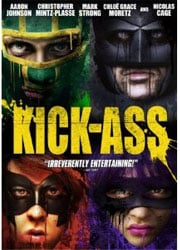 Kick-Ass is an awesome comic book movie for adults. It’s funny, raunchy, violent, and definitely NOT FOR KIDS! So clueless parents out there, don’t show your kids this. With that said, if you’re looking to be entertained, Kick-Ass is your movie.

The movie centers around a geek teenager named Dave Lizewski (Aaron Johnson) who always wondered why no one became superheroes like in the comic books. After getting robbed by a couple of thugs, he decides to try out crime-fighting in some scuba gear, a mask and nun-chunks. But while trying to stop another robbery attempt, he gets beaten, stabbed and to top things all off, hit by a car as well. He survived, thanks to spending weeks in the hospital and getting metal plates placed in his body. As Dave put it, like Wolverine (from X-Men).

He later tries it again, and becomes a YouTube viral hit from a video of him defending off attackers. The video catches attention to actual “superheroes,” Big Daddy (Nic Cage) and Hit Girl (Chloe Grace Moretz). Big Daddy is revealed to be Damon Macready, a former cop who was framed by crime boss Frank D’Amico (Mark Strong). While in prison, his pregnant wife dies of a over-dose and his daughter Mindy is born. Years later, Mindy is trained by Damon and they vow to get revenge at D’Amico. They join forces with Kick-Ass but it’s merely to save Kick-Ass from getting killed from D’Amico’s men. Besides D’Amico’s men they have to worry about, they also have to worry about his nerdy neglected son who takes on the evil persona Red Mist.

I never heard of the comic books before this movie came out. This movie could have been very lame if not put in the right hands but thankfully Matthew Vaughn knows how to make a good movie. What you get is a HARD R, lots of cartoon CGI gore and violence, action, a hilarious script and a vulgar teen that could kill you in 2 seconds. From what I hear, it’s close to the comics but actually not as dark believe it or not. I actually thought one scene in particularly was tough to watch and very dark/graphic. It looked fake when it was happening but it was still tough to sit through. That’s a scene I’ll be fast-forwarding from now on hahaha.

Even though Kick-Ass/Dave is the central character, I almost think this should have been called Hit Girl instead. She obviously makes the movie, and steals just about every scene she’s in. Kudos to Chloe Grace Moretz for a great performance! Aaron Johnson plays the geeky Kick-Ass quite well, and Nicolas Cage does a funny Adam West impression when he speaks as Big Daddy. Mark Strong is the go-to-guy for bad guys these days and I’m fine with that since he’s a great character actor.

As far as the other stuff is concerned, I thought the dialogue and scenes were funny when they were meant to be funny. The action was cool but felt they showed too many of the good scenes in the trailers and “red band” trailers. The CGI blood and gore could have been a little bit better and more realistic but perhaps that’s what everyone was going for? Going for that cartoony violence look. Maybe they didn’t have it in the budget to use real gore and makeup? The direction from Vaughn was good I thought. I thought he was the right choice for the film, considering that I loved Layer Cake and Stardust.

The extras on the DVD were a little disappointing. The history of the comic, and the interviews with Mark Millar and the comic book illustrators/colorists was cool. But I wanted to see some cast interviews and behind the scenes stuff, and maybe even some deleted scenes. But I guess if I want to check out that stuff, I have to upgrade to Blu-Ray. I really hate DVD getting the short end of the stick when it comes to extras lately. There’s also audio commentary, some images, and trailers. If you want extras, get the Blu-Ray instead.

Kick-Ass is awesome and very enjoyable. It could have been a tad better in some areas but overall I really liked the movie. I hope there’s a sequel coming out for this but I’m not sure it will happen. I know Mark Millar is writing a sequel to the comic book, so there’s always that option. If you want to buy the movie, get it on Blu-Ray! 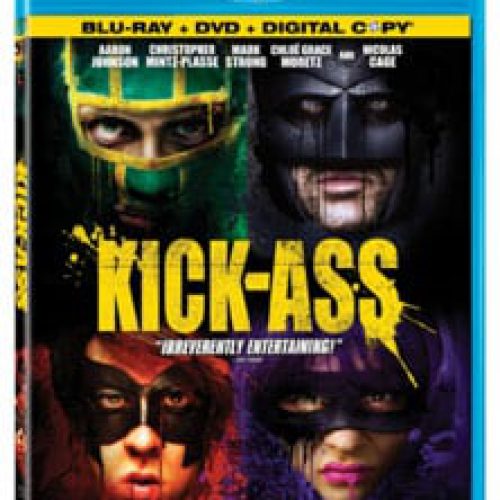