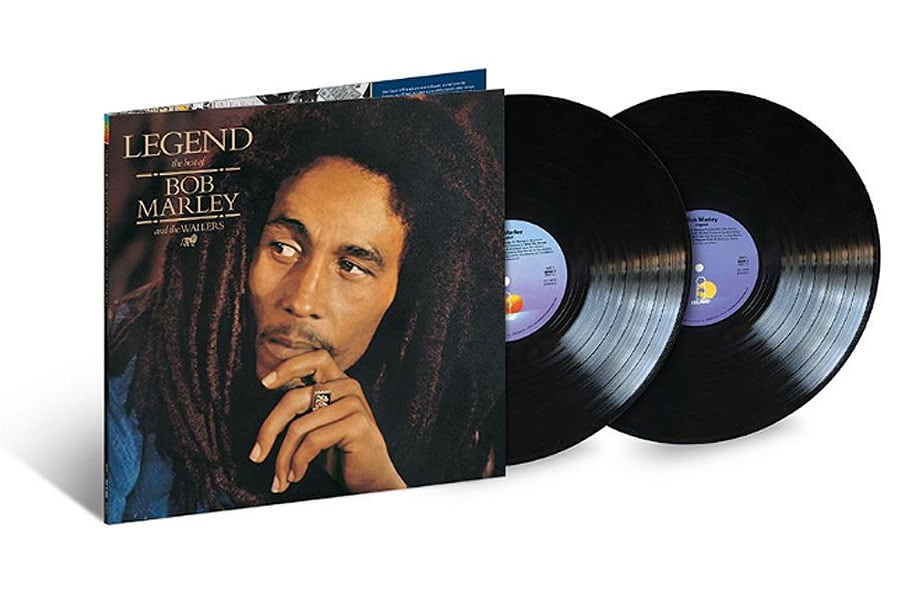 On June 14th, The Marley Family, Island Records and UMe join collective forces to observe the 35th anniversary of Bob Marley & The Wailers’ Legend with a double 180-gram vinyl reissue. Initially released on May 8, 1984, Legend holds the distinction of being the world’s best-selling reggae album of all time with over 15 million copies sold in the United States alone, and over 28 million worldwide. Without a doubt, that’s the album that got me into reggae music. I remember my Dad bringing that home from a garage sale, and we would play it by the pool everyday during the Summer.

Here’s more from the press release:

A greatest hits compilation for the ages, Legend is the soundtrack to the remarkable life and recording career of one of reggae music’s most important and influential figures. This iconic collection not only serves as the perfect introduction to the music of Bob Marley, it has also become an essential element of every reggae fan’s permanent collection.

This vinyl-only 35th anniversary reissue comprises the original “BMW1” version of Legend with the addition of two original U.K.-only cassette bonus tracks (“Easy Skanking” and “Punky Reggae Party”). Taken as a whole, the 16 songs that comprise Legend have literally defined a genre. Among the album’s instantly recognizable tracks are “Get Up Stand Up,” “One Love / People Get Ready,” “I Shot The Sheriff,” “Three Little Birds,” “Jammin,” and “Exodus.” Other Legend anthems like “No Woman No Cry” and “Is This Love” feature backing vocals from The I Threes, an all-female trio comprised of Marley’s wife Rita Marley, Judy Mowatt, and Marcia Griffiths. Mrs. Rita Marley’s own career retrospective, quite aptly dubbed Lioness of Reggae, is being released on limited-edition vinyl by Tuff Gong Worldwide on May 3.

A new visual for “Satisfy My Soul” was recently shot by Pantera as directed by Brian Kazez and produced by Propaganda Films, serving as a conceptual interpretation of the song to show what it means to “feel alright” in Jamaica. This also happens to be the same directorial team that shot a new clip for “Easy Skanking,” which was filmed in Kingston and garnered much acclaim earlier this year for the way it shared an authentic look at a day in the life of Jamaica and the indefatigable, uprising spirit of the people who live, love, and work there the whole year round.

To this day, Bob Marley remains one of popular culture’s most important and influential entertainment icons. His lifestyle and music continue to inspire new generations around the world. Marley was the first Jamaican artist to give voice to the struggles of his people and introduce Rastafarian culture to the world at large, and his expansive music catalog has sold millions of albums all across the globe.

Bob Marley’s legacy truly lives on in the artists and generations he has influenced. Today, the spiritual, political, and musical resonance of the man’s work continues to be felt around the world, and Legend is the one true collection that cements his perpetual global legacy.

Side C
1. One Love / People Get Ready
2. I Shot The Sheriff
3. Waiting In Vain
4. Redemption Song