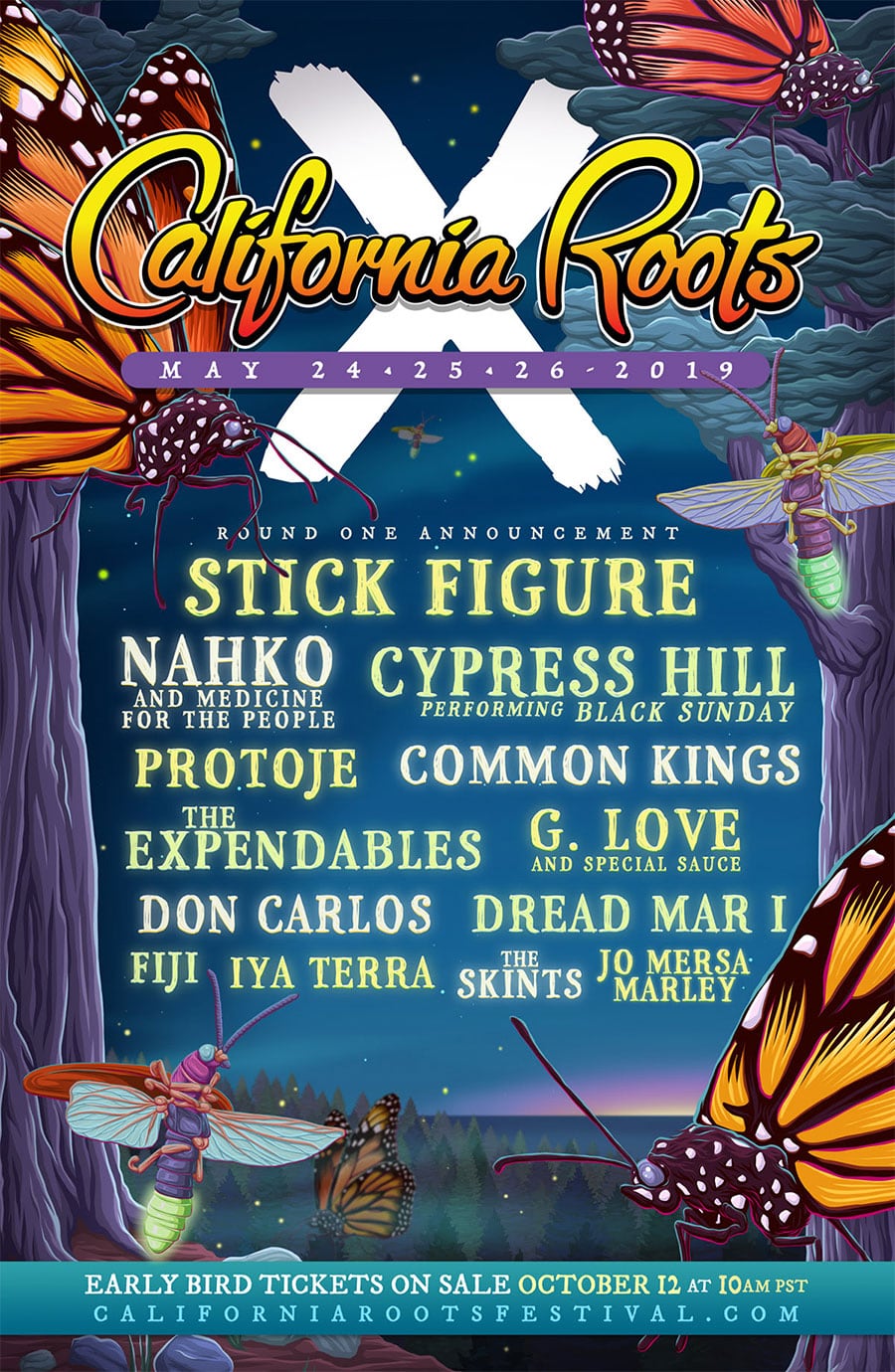 It’s the 10th anniversary of the California Roots Music & Arts Festival and the first round of artists have been announced today. Stick Figure, Cypress Hill, Common Kings, The Expendables, Don Carlos, Protoje, Iya Terra, and The Skints were announced so far along with a few others. I really wish I could get to California for one of these festivals. Seems like this is the year to do it. Tickets go on sale today!

The 10th annual California Roots Music and Arts Festival will take place at the historic Monterey County Fair and Event Center from May 24-26, 2019. The top tier national festival is the premier gathering for the progressive U.S. Reggae and roots music movement and culture, bringing the scene together over Memorial Day weekend in beautiful Monterey, CA.

California Roots is thrilled to announce its first round of artists for their milestone ten year anniversary. As expected the three day event will feature todays biggest reggae acts alongside hip hop legends, roots music activists, and the next wave of up and comers. Artists announced include Stick Figure, Nahko and Medicine For The People, Cypress Hill performing their classic Black Sunday, and festival favorites Common Kings, The Expendables, Don Carlos, Protoje, G. Love & Special Sauce, The Skints, and Iya Terra. Making their debut at Cali Roots are Dread Mar I, FIJI, and Jo Mersa Marley.

The leading festival has become a destination event with thousands of fans flocking from all over the world. 2018’s impressive livestream numbers proved that it’s a must attend global event, with over 1.5 million unique viewers logged in from Brazil to the UK. In addition, the festival has been recognized for their commitment to creating an environmentally conscious event that benefits the surrounding community, educates and engages the attending fans, and provides a music festival model that is truly sustainable. FestX chose Cali Roots as a finalist for “Outstanding Green Festival” in 2017 with initiatives like their “Redwod Pass,” which resulted in the planting of 2,600 new Redwood trees to date (and have pledged to plan 2,000 more in 2019) with the Redwood Forest Foundation (RFFI).

2019 is shaping up to the biggest year yet, with today’s first round artist announcement. Limited Early Bird 3-day tickets will go on sale on Friday, October 12, 2018 at 10am PST (Purchase Link: http://californiarootsfestival.com/tickets).

Round One Artist Line-Up Announcement:
Stick Figure
Nahko and Medicine For The People
Cypress Hill performing Black Sunday
Protoje
Common Kings
The Expendables
G. Love & Special Sauce
Don Carlos
Dread Mar I
FIJI
Iya Terra
The Skints
Jo Mersa Marley
“Our ten year anniversary is such a milestone event, thanks to our community and fans. It’s amazing that it started out as an intimate gathering of friends around like-minded music, but then blossomed into a global brand with deep meaningful roots,” passionately states festival Co-Producer Dan Sheehan. He adds, “Together we’ve come a long way to make Cali Roots what it is today. We are honored to have helped break bands, and see other artists receive GRAMMY awards and nominations in the past ten years, proving that Cali Roots really is a movement. Our first round of artists is just the start, as we have more exciting news to come.”