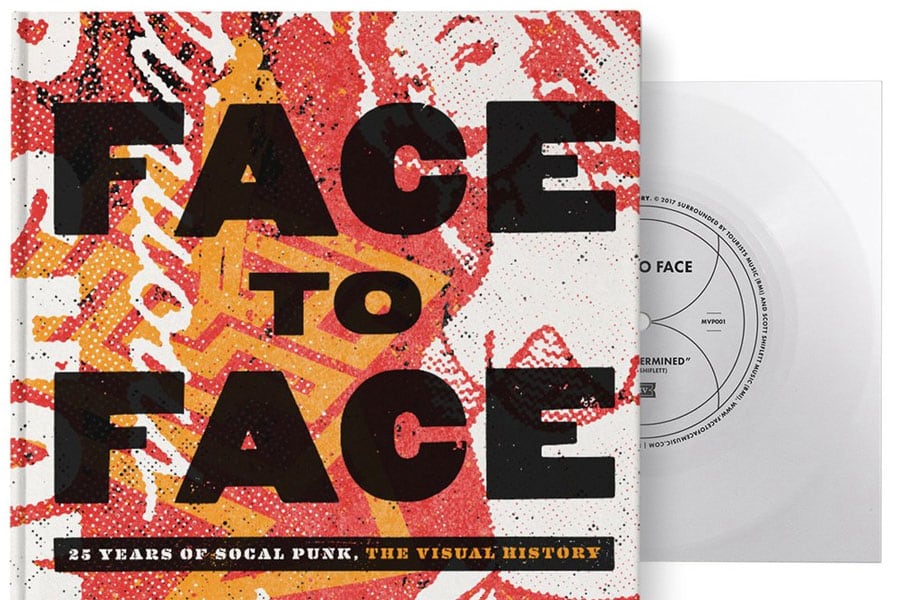 Melodic Virtue is releasing a coffee table book “Face To Face: 25 Years of SoCal Punk, The Visual History,” which will be out on December 1, 2017. The 1000 limited-edition coffee table book includes a nearly 200-page visual history offering a rare glimpse of the 25-year history of Face To Face through never before seen photos, stories as told by contemporaries and fans and packaged with an unreleased song on flexi disc titled “Self-Determined”. Pre-order began on Friday.

“When I started Face to Face in 1991, I never imagined such a fulfilling and rich career would develop thanks to the dedicated support of our fans,” says frontman and founder Trever Keith. “It’s both exciting and inspiring to see the band’s history captured in a such a vivid and artful way as Aaron Tanner has done with this book.”

Throughout the pages of “Face To Face: 25 Years of So Cal Punk, The Visual History” many contemporaries and fans offer their experiences and insight into the history of this preeminent SoCal punk band throughout their 25 year history, including Travis Barker (Blink 182), Chris Carrabba (Dashboard Confessional), Kevin Baldes (Lit), Tim McIlrath (Rise Against), Corey Miller (LA Ink), Roger Lima (Less Than Jake), Chris Conely (Saves The Day), and Patrick Seton O’Connor (The Dan Patrick Show).

The book will also contain a new unreleased track titled, “Self-Determined,” recorded during the sessions for their most recent release, Protection (2016, Fat Wreck Chords). “We loved the song,” says Trever Keith. “But it did not make the final album cut. It’s the perfect song to accompany our career retrospective book because the title in and of itself is apropos in conveying the overarching spirit of Face to Face as a band.”