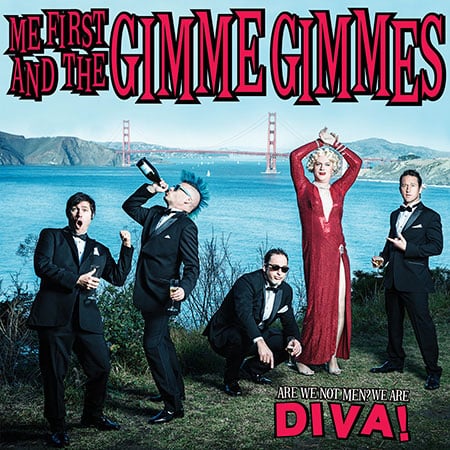 The all-star punk rock cover band Me First and the Gimme Gimmes are finally releasing a new full-length entitled Are We Not Men? We Are Diva!. Some of the artists they will be covering this time around include: Cher, Celine Dion, Lady Gaga, Paula Abdul, Whitney Houston and um, Boy George. Sure, I guess that counts.

In that mythical era known as the 90’s, five brave young men emerged from the legendary halls of some of the mightiest bands on Fat Wreck Chords with a single mission: make all the rest of these dildo punk bands covering popular songs obsolete. They crowned themselves Me First and the Gimme Gimmes and the world rejoiced. Now, seven records, scores of singles and nearly a thousand years later, having tackled every genre under the sun, the bold young knaves known colloquially as the Gimmes have ridden their success hard, and decayed into desiccated, old divas. Yet, the diva, she is immortal. And thus, imbued with the old-world, Mystic Pizza-esque swagger of Cher, the modern pop-art sensibility of Lady Gaga and the enthusiasm-for-drug-consumption of Whitney Houston, Me First and the Gimme Gimmes have returned from their beauty rest, busting out of their sequined gowns, and throwing vases at their assistants in order to present you with their latest opus, entitled Are We Not Men? We Are Diva!, slated to be released on May 13, 2014 on none other than Fat Wreck Chords. And you’d best believe, whether because of their tantrums or their virtuosity, once you hear these fat ladies sing, there’s not gonna be a dry eye in the house.

For the uninitiated, Me First and the Gimme Gimmes consist of Lagwagon frontman Joey Cape on the guitar, Shiflett brother (and Foo Fighter) Chris Shiflett on the other guitar, Lagwagon drummer and Fat Wreck utility superhero Dave Raun on the skins, and are rounded out by Fat Wreck-head-honcho/NOFX main-dude Fat Mike, and incomparable crooner Spike Slawson. Together, Me First and the Gimme Gimmes—an outfit that has always operated more like a beer-hall Pussycat Dolls than a regular mortal band—contain so much hot air, so much pomp, so much attitude, that it’s a wonder that these guys can still manage to pull their five individual tour buses into the same parking lot, put their differences aside and belt out the ballads without clawing each other’s eyes out. But they do, for the love of the fans, the music, and of course, the applause.

In the past, The Gimmes have tackled such disparate genres as Motown, country, show tunes and even Japanese pop (sung in real live Japanese!) but none of that enabled them to truly soar as high above the eagles as they desired, feeling the wind of other, lesser bands beneath their wings. So this time, the Fat (Wreck) Five decided to take on the un-take-on-able and hit us with cuts from the likes of Celine (gasp!) Christina (Sigh!) and Paula Abdul (oh no you di’int!) among others. And as Spike’s baritone somehow manages to make Whitney Houston’s (Dolly Parton-penned) Theme Song To The Bodyguard EVEN MORE EPIC, you will be moved to tears. You will find joy. You will shake in your very skin as the music of these divas gently takes you by the hand and shows you how to love again. AND! You’ll buy tickets to see ‘em on tour.

Because that’s right folks! Nothing says ‘diva’ like coming to your town to bask in the torrential, gushing blasts of your love, and the Gimmes will be hitting the entire world in support of Are We Not Men? We Are Diva!, except maybe Mike, who’s such a diva that he’s got substitutes on hand! So grab those flowers off of your grandma’s grave and head out now, to check out Me First and the Gimme Gimmes on wax and in your town, before these five outrageous harpies either kill each other or wind up as a Vegas destination act, bloated, high on pills and… uh, nevermind that last part. Just go see em, eh? It’s a helluva time. 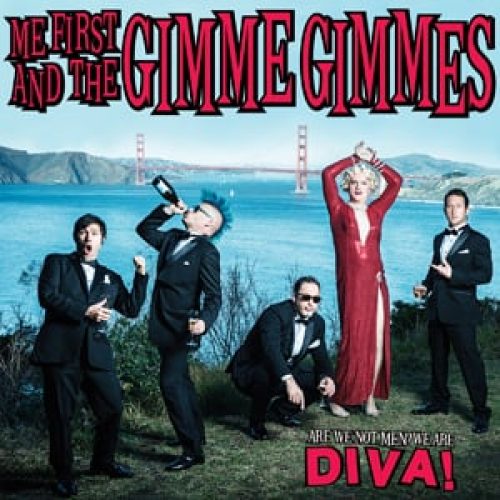 Me First and the Gimme Gimmes – “Are We Not Men? We Are Diva!”