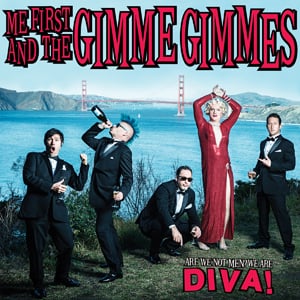 Surprisingly it’s been nearly six years since the Gimmes released “Have Another Ball” which was mostly re-released songs and almost eight years since their last album of “new” covers. Where the hell have they been all these years? It’s not like these guys have anything else going on, really. So how do the Gimmes do after stepping into the shoes of the divas whose songs they graciously reinterpreted?

According to MFatGG guitarist Joey Cape, all of the songs on this album are considered guilty pleasures by one band member or another. Songs by divas such as Paula Abdul, Celine Dion, Christina Aguilera, Lady Gaga, Madonna and Barbra Streisand and…Boy George are remade in the Me First and the Gimme Gimmes way.

While a new Gimme Gimmes album is always a welcome thing, personally I just don’t like most of the song selections on this release. I absolutely hate anything by Celine Dion, Christina Aguilera, Lady Gaga and Cher and even though they are done in the Gimmes way, I just couldn’t get into them. When I like the source material I can get into a cover song even more.

With that said, I did enjoy a few of the tracks that I like the original of like “Straight Up”, “I Will Always Love You” and “Karma Chameleon” as well as some tracks that were much better than the original like “I Will Survive” and “Top of the World”.

As I mentioned before, for me the track selection just didn’t cut it. I really couldn’t stand listening to “Believe” complete with the vocal effects and anything that reminded me of Celine Dion which in turn reminded me of the stupid “Titanic” movie. I would have liked to hear some songs from some divas that are closer to Me First and the Gimme Gimmes style like their take on a No Doubt song or, as I almost thought happened but the title was slightly off, was a cover of the Selecter’s “On My Radio”. Instead it’s Lady Gaga, Cher and Bawbawa…blech.

Overall I would say that the album had some decent track selections that made some great covers, some bad covers that didn’t translate that well and a bunch of songs that there were no hope of being good punk rock songs because Celine Dion and Lady Gaga suck. That pretty much sums things up for me. Now take off you pumps and get on with country covers of NOFX, No Use For A Name and Lagwagon songs guys!

Bottom Line: The album was brought down by a bad selection of songs from some of the bitchiest of divas. The stronger songs translated better into punk rock songs and there were a few surprise songs that stood out. It’s really a matter of preference of the song choices here.
Notable Tracks: Karma Chameleon, I Will Survive, Straight Up, I Will Always Love You
Overall Rating: 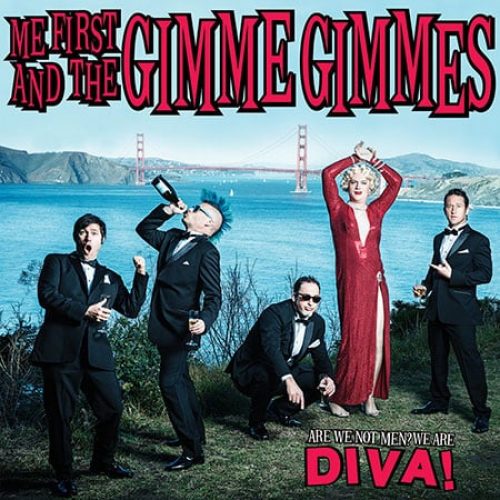 Me First and The Gimme Gimmes releasing “Are We Not Men? We Are Diva!” on May 13th