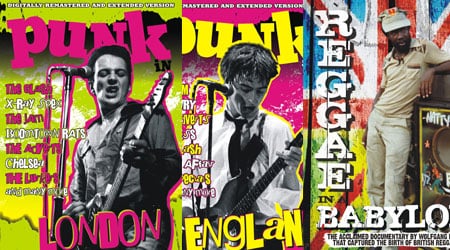 Punk in London (1977)
This acclaimed feature length music documentary comes to special edition DVD featuring incredible live performances from: The Clash, X-Ray Spex, The Jam, Boomtown Rats, The Adverts, The Lurkers and many more! Digitally remastered to the highest standard from the original 1978 negatives by BBC Post Production, this access-all-areas documentary really captures the punk phenomenon in all its raw power and energy. Featuring early live material from The Clash, X-Ray Spex, The Jam, The Adverts and interviews with those who strived for anarchy in the UK, Punk in London is a unique and powerful record of punk life as it really happened in the late ‘70s. Filled with stunning live performance and insightful interviews, this remastered DVD-9 release features incredible picture and sound clarity along with previously unseen bonus footage of The Clash in Munich. Also included is with a retrospective interview with director, Wolfgang Buld and trailers for other Odeon documentaries.
http://www.seeofsound.com/p.php?s=MVDV4882

Punk in England (1978)
This brand new remastered and extended edition DVD includes live performances and interviews with The Jam, Ian Dury, The Adverts, Madness, The Clash, Secret Affair, The Specials and many more… Following up the award winning Punk in London comes the post-punk apocalypse that is Punk in England. The second part of Wolfgang Buld’s trilogy records the punk phenomena moving from London to the suburbs as the creative energy of punk inspired kids to experiment with new-wave, ska, mod and the rude boy music. This incredible documentary captures the punk and post-punk phenomena in all its raw power and creativity.

Bonus Materials:
Women in rock documentary featuring live performances and interviews with Siouxsie, The Slits, Girlschool and many others.
New and unseen six track set from The Adverts filmed live in 1978
Trailers for Punk in London and Reggae in a Babylon.
http://www.seeofsound.com/p.php?s=MVDV4883

Reggae in a Babylon (1978)
Reggae in a Babylon is the acclaimed documentary by Wolfgang Buld that captured the birth of the British Reggae. This DVD includes several sensational songs. In the late 1970’s the young, gifted and black generation of Thatcher’s Britain fused the Revolutionary zeal of Punk with their Rastafarian roots to create a new sound system that defined their struggle. Reggae was the savior in their modern ‘Babylon’ and this acclaimed film charts the birth of urban British Reggae.
http://www.seeofsound.com/p.php?s=MVDV4884