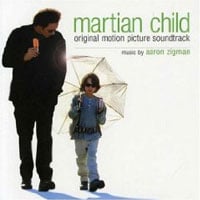 Martian Child was a 2007 drama/comedy film that starred John Cusack. Of course it’s 2009 and I have yet to see the movie or listen to the score. The film is about a man adopting a young boy after losing his wife. The young boy thinks he’s from Mars, so is the kid’s name Mork?

Anyway, I decided to listen to this CD since I like Aaron Zigman’s music and figured this would be nice to listen to. Right off the bat with “Main Title,” the track is filled with slow piano work. Scores that comes to mind when listening to “Martian Child” are Finding Nemo and American Beauty. Zigman has captured that Thomas Newman style in many of the tracks. Not every track sounds like that though, check out “David and Harlee” and “I Eat Lucky Charms.” Guitar playing is also prominently featured throughout the score. While I liked listening to this score, it just feels like the filmmakers wanted to get Thomas Newman to score this instead. I wonder how Aaron Zigman felt about that?