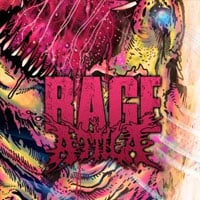 There are a few bands that are called Attila and no this isn’t the band that featured Billy Joel. This metal band is from Georgia and are described as partycore. So I guess they scream about partying, snorting drugs, drinking, and having a careless good time. I hope the band isn’t taking themselves too seriously but I have a feeling they aren’t.

For being a death metal party band, this isn’t bad. For singing about stupid crap, they certainly can play well enough to get people’s attention. I like the vocalist who sort of screams like Oderus from Gwar. When the band starts to sing like a screamo band, then it takes me out of the music. At times, the singing makes me laugh because they sing like trolls or something. In fact, they actually sound like Zorak from Space Ghost. Zorak-core? I’m sure that’s next in the many sub-genres. Besides the singing, the band sounds decent. I think there’s too many breakdowns in the songs but that’s just my feelings on their songs. Attila is certainly not for everyone but they gave me a good chuckle or two while listening to this album.