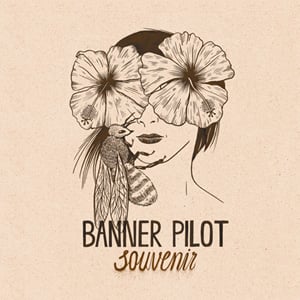 Having such a diverse background of punk influences ranging from Hot Water Music, Jawbreaker, The Gaslight Anthem and Screeching Weasel it was interesting to hear where “Souvenir”, Banner Pilot’s fourth full-length would land on that chart.

Right off of the bat with the first few tracks you can hear the influences shine through. “Modern Shakes” has a Jawbreaker sound to it while “Effigy” bounces around the Against Me/Screeching Weasel influences and “Dead Tracks” definitely gives a nod to the Gaslight Anthem.

Banner Pilot isn’t just about ripping off sounds of bands that influenced them. The desperate raspy vocals, flawless shifting of guitar riffs and a strong rhythm section, the band manages to put their own touch on the sounds that influence them just as any good band would. You can hear their influences pop up on various parts of songs, but all the while Banner Pilot tie it all together with their own signature sound.

While “Souvenir” took a while for me to warm up to, as the album progressed the songs got better and better and the songwriting…usually about life lessons learned and the struggles of live but not as depressing as it sounds…began to shine. Some of my favorite tracks were the later tracks on the album. Hidden gems like “Shoreline” and “Hold Fast” perked things up after somewhat of a lull towards the middle of the album.

“Souvenir” was one of those albums that gained steam as it rolled along. There is definitely an array of punk rock sounds that influenced Banner Pilot and they managed to embrace those influences while not letting them control their sound. “Souvenir” feel like something eerily familiar, yet distantly unknown. And for that I thank them.

Bottom Line: A blend of something familiar and something fresh. “Souvenir” feels like the kind of album that you would throw on during a rainy summer night.
Notable Tracks: Shoreline, Hold Fast, Heat Rash, Colfax
Overall Rating: