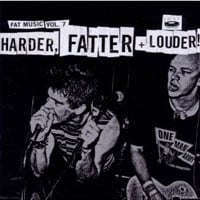 It’s about time we got a new Fat Music from Fat Wreck Chords. It’s ONLY been 8 years since the last one?! Whoa, that’s a long ass time and a lot of bands have come and gone since then. That’s not to say this comp will have a bunch of bands you don’t know on it. It doesn’t. It’s got the new Fat lineup, plus some of the punk rock veterans we have grown to love.

Kicking things off is Old Man Markley’s “For Better For Worse,” which is probably the best spot to put that song. It’s kind of hard to put that track amongst the straight up punk rock songs. We get an awesome preview of a new Swingin’ Utters track called “Brand New Lungs.” Talk about a band that really needs to release a new album already. That album is coming out April 26th. Another band that needs to release new music is Mad Caddies, whose new(ish) song “Why Must I Wait” is after Swingin’ Utters. This compilation also features great songs from Teenage Bottlerocket, Banner Pilot, Against Me, Tony Sly, None More Black, Chixdiggit, NOFX, Smoke or Fire, American Steel, NUFAN, and many more. This comp just proves that Fat Wreck Chords is the consistently best punk rock label out there. No contest!