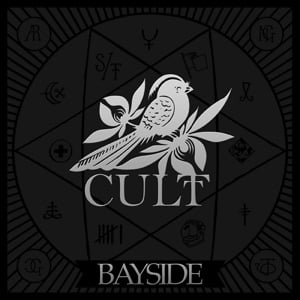 Admittedly, other than a few tracks here and there, I haven’t really listened to Bayside. They were always lumped in with bands like Punchline, Taking Back Sunday, Silverstein and Saves the Day…bands that drew heavily from the emo side of the musical force. With their sixth studio album “Cult”, I finally have a full listen and I think that I like what I hear…somewhat.

Right off the bat I knew that what I was listening to wasn’t the Bayside that I remember hearing from my brief musical samples. The first track “Big Cheese” is a metal riff-heavy track that could be ripped from an Avenged Sevenfold album. It was fast-paced, angry and energetic…definitely not something that you would define an emo band by. The second track, “Time Has Come” has more of a pop punk flavor circa 2001, while the third track “Hate Me” has a heavy grunge influence to it. Those first three tracks on “Cult” definitely show that Bayside don’t really fit into one specific musical classification…and that is a good thing.

With such a great start to “Cult”, I was a little disappointed with the latter part of the album as it drastically slowed down in pace and genre-bending until the last track of the album. The bands emo influences are more predominant, thus slowing the album to a halt. The tracks aren’t terrible, just not what I was expecting with such a strong start to “Cult”.

Overall, “Cult” was one part what I expected and two parts what I didn’t expect to hear. I was pleasantly surprised with the variety of sounds to kick off the album, but disappointed at how “Cult” somewhat fizzled out towards the end.

Bottom Line: “Cult” is a harder album that I was expecting at first, but manages to find its way back to the expected towards the end.
Notable Tracks: Hate Me, Big Cheese, The Whitest Lie
Overall Rating: