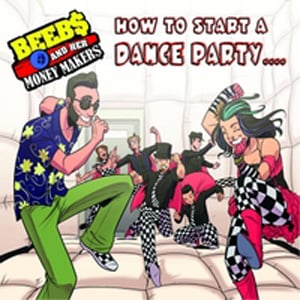 In the days of olde, when I was just a wee lad of the ripe young age of 16 there was this thing called ska that I was just discovering thanks to the dreaded third-wave.

As a young naïve whippersnapper I enjoyed this music and the bands that opened the door for me like Reel Big Fish, Save Ferris, the Aquabats, the Mighty Mighty Bosstones. Most third wave bands, especially the OC bands were fun, goofy, entertaining and unique. They didn’t take themselves too serious and could always make me laugh. But alas rude boys in dark suits and thin ties dreaded the much maligned third wave and it exploded upon itself. Where am I going with this? You’ll see…

Having never heard of Beebs and Her Money Makers until a week ago, the first time I saw them play opening up for Reel Big Fish I took a sigh of relief and welcomed in this breath of fresh air mixed with an odor of nostalgia. The members of the band each wore black and white checkered pants, the lead singer dressed like Punky Brewster, they fought a giant robot and had a skankin’ hot dog…minus the “Pickle” on stage with them…it was amazing. Since this isn’t a concert review, I’ll tell you upon arriving home I downloaded all of Beebs’ stuff. Thus this review for their newest release.

“How To Start A Dance Party” has everything that I loved about their live performance. Their sound isn’t just ska even though their ska songs are pretty damn good. Beebs, the lead singer has an amazingly powerful voice and it leads well with blues/soul heavy songs like “A Night’s Dream” and “Learn”…the latter track having a predominant funk sound to it. She really reminds me of what a lovechild of Gwen Stefani and Amy Winehouse would sound like. The other band members are also well-versed in the switch ups in genres and play the funk and soul just as well as the ska stuff.

If it isn’t going to be too obvious, my favorite track on the album is “Crazy” which is a classic third-wave ska song if there ever was one. It also features guest vocals by Reel Big Fish front man Aaron Barrett. “Crazy” is such a fun song and one of my new personal favorites. Another featured ska song on “How To Start A Dance Party” is the cover of the Miley Cyrus song “Wrecking Ball”. Since I’m oblivious to the world, I had never heard the song before and had no idea that it was a cover until a friend informed me of the situation…unto which I said…oh, ok…and continued to carry on carrying on. I’m a fan of ska cover songs no matter who the original track is by and it is a pretty good cover.

Compared to the other releases I have listened to from Beebs and Her Money Makers, “How To Start A Dance Party” is my favorite listen overall. Every song is different in ways while also maintaining a good flow to the album. “Crazy” and “Wrecking Ball” easily put it over the top. If you’re looking for something different and fresh in the ska community, Beebs and Her Money Makers is where it’s at.

Bottom Line: A fun fresh album that is influenced by things like the third wave of ska, Reel Big Fish, funk, soul and brothers. And it’s also nostalgic in a hip and modern way.
Notable Tracks: Crazy, Wrecking Ball, Running Away
Overall Rating: