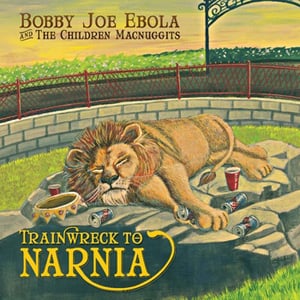 “Trainwreck To Narnia” is the latest release from my favoritist, weirdest folk rock metal punk band that doesn’t include Jack Black in the lineup. Jack Black doesn’t like punk so screw him anyway.

To put into words the awesome genre smashing sounds of Bobby Joe Ebola & the Children MacNuggits (sometimes the band name is enough) is a chore that this crappy staff writer won’t even try to attempt. Instead I’ll just pick out some songs and try and connect the musical genres involved. Take “My Darling Boo” which is about a man in love with a mannequin. It’s a fast paced acoustic rock song that wants to be a country song when not trying to be a vaudeville song and it has horns in it. And then there’s “Baked Beans & Whiskey” which is a pretty straightforward accordion driven campfire sing-a-long Irish jig. Let’s talk about the track “Censor The Word” next. That song is one part GWAR, one part NOFX and one part They Might Be Giants.

When Bobby Joe Ebola manages to stick to (mostly) one genre you’re still given a mind blowing track. “The Last Child Soldier” is as generic of a cock rock ballad as one could get without being written by Nikki Sixx himself, but if you listen closely to the lyrics you’ll most likely piss yourself. My personal favorite track on “Trainwreck To Narnia” hands down is the epic metal track called “Bone Dagger” and was written by the band after two friends of the band went on an adventure while tripping on mushrooms. It is now the theme song to my Dungeons & Dragon sessions. To note, the song also won an award for the most metal song by a non-mental band…if that makes any sense to you. The song is very “Metalocalypse”.

Bottom Line: For someone looking to have a good time, laugh, cry, shout and maybe piss themselves a little, “Trainwreck To Narnia” is THE album for you
Notable Tracks: Blues Turn Brown, Cop Kisser, Baked Beans & Whiskey, Bone Dagger, Hey Everybody!
Overall Rating:

Check out the official video for “Bone Dagger”!