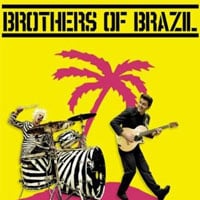 It’s obvious that Side One Dummy is trying to find another hidden gem like Gogol Bordello. Brothers of Brazil is a samba/bossa nova/punk influenced band that sounds like something you might hear at a Casino pool in Vegas. The group consists of a singer/acoustic guitar player and a drummer who looks like he was in Total Chaos.

I have to say that Brothers of Brazil is something I haven’t really heard before. This isn’t just your typical bossa nova music, these guys have a bit of an attitude to it. The band played the Warped Tour I believe which makes me wonder how they went over with the crowd. This seems like the type of band that you either like or dislike. I think I like this band but some of the songs tend to get annoying or boring for me. I feel like Brothers of Brazil would benefit with having more people in the band. The music seems too stripped down to me. I have to listen to this album a few more times to really get a grasp on it. With it being Fall now, my mood isn’t really on tropical style music these days.

Bottom Line: Unique band that will either be loved or hated.
Notable Tracks: Punch You, I Love The French, Take The Money and Run Away to Rio
Overall Rating:

Bossa nova, Brothers of Brazil, punk, samba, Side One Dummy

The Brothers of Brazil touring with Adam Ant

Side One Dummy releasing Brothers of Brazil album