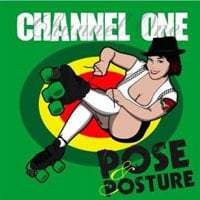 Channel One hail from San Antonio, Texas and have a third wave ska/trad ska sound. Their Megalith Records debut is entitled “Pose & Posture” and if the rudeboys and rudegirls haven’t heard of the band yet, they will!

It’s about time I checked out some new American ska music. I’ve been reviewing ska music overseas for years but rarely review a new band from America. You would think I ran a UK ska website! Anyway, Bucket of the Toasters opens up the debut album with him letting everyone know we’re “listening to Channel One Radio.” If Bucket approves of a band, they must be special. The first track “Please” is okay, but I prefer the next few tracks to that track. Best tracks on the album include “I Let My Guard Down,” and “Let Her Run.” The chorus for “I Let My Guard Down” sounds familiar, like I’ve heard this song somewhere else. Maybe they just have a similar riff or lyrics from another song? Either way I like the song a lot. Channel One’s sound also mixes in some southern influence and even a little bit of jazz. Gerald Hooper’s singing voice is impressive, and I really dig his southern twang on some of the songs. The Jack Johnson-ish song “Till It’s Too Late” is a standout track as well. I’m finding myself liking the solo/acoustic ska stuff more and more. I wish the band recorded more songs like that. But right after that, things pick up again with a few up-tempo ska songs. If you’re sick of listening to the same old ska CDs, then why not listen to Channel One’s debut album on Megalith? You’ll thank me later!