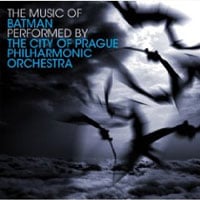 The music of Batman is being celebrated with a wonderful best-of compilation from Silver Screen Records. The City of Prague Philharmonic Orchestra & London Music Works have recorded some of the franchise’s best score pieces that will make fans do the Batusi. The music of Danny Elfman is well represented, but the music from the newer movies are only represented on 2 tracks (“Eptesicus” from Batman Begins, “Aggressive Expansion” from The Dark Knight). Hans Zimmer & James Newton Howard’s brilliant film scores deserve more than 2 tracks!

Danny Elfman’s classic Batman theme is track 1, and it deserves to be. It’s a memorable theme, and something that I’ll always remember. The original Batman movie from the 80’s has a few tracks on here, like “Flowers & Love Theme,” “The Joker’s Poem Clown Attack,” “Up the Cathedral” and “Waltz to the Death.” It’s one of Danny Elfman’s best scores, well besides Edward Scissorhands and Beetlejuice of course. Pre-Batman Begins, each Batman film (Batman Returns, Batman Forever, Batman & Robin) gets a track which is understandable. Besides hating Batman & Robin itself, I hated the score as well. What annoying crap that was. After the Batman Begins and Dark Knight tracks, the non-film movies also get represented. Batman: Mask of the Phantasm’s “The Birth of Batman” and Batman: Gotham Knight’s “End Credits” are also on this album. But there’s more my caped crusader lovers! Remember the cheesy yet fun Batman: The movie and the original Batman TV theme song? That’s included on here as well! There are 15 tracks in all, and it’s a great listen if you enjoy the music from Batman. Perhaps they would release more music from the best Batman movies (Batman Begins, Dark Knight) though next time?