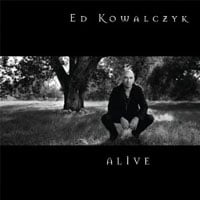 If you don’t know, Ed Kowalczk is the former lead singer of Live. Since Live isn’t a band anymore, Ed has released his first solo album featuring 11 rock songs that will be sure to get airplay on the rock stations.

I don’t mind a few Live songs but can’t say I’ve been a fan of the band after all these years. But with that said, Ed’s voice is great and as soon as you hear it, you know it’s him. This solo album features more of that, except this isn’t Live. I can’t really compare if this sounds like Live or not; how would it not sound like them with Ed singing. The opening track “Drive” is probably the best song on the album, and if it isn’t his single, it should be! The track “Stand” sounds like a song you’d hear during some commercial for a TV show. It’s just something about that song that makes me think of that. A lot of these songs seem somewhat religious to me, but not positive they are or not. With songs like “Grace,” “Zion,” and others, I get the sense of religious overtones. It’s not really my thing but this album is still decent if you liked Live.