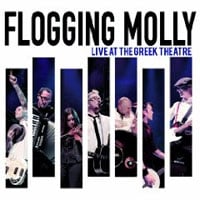 What better way to celebrate St Patrick’s Day with a new Flogging Molly CD and DVD! Flogging Molly have released live music before but not a full-length concert. The same goes with a full-length concert DVD. Their documentary DVD Whiskey on a Sunday was fantastic and this concert is another example of the band’s excellence. Fans will be treated with a double CD and a full bonus DVD of the same concert. This concert was filmed at the Greek Theatre in Los Angeles on September 12, 2009. All of their albums are represented here including most of their newest album “Float.”

The band has always been high on my list for best live show and this is just another example of it. They are always energetic, and willing & excited to play their music to the masses. You would think they would be sick of playing the songs by now but if you look at their faces, they are just enjoying themselves and you can’t blame them for that. Just watch their documentary, you will see how much they care about Flogging Molly.

The audio quality of the CD and the DVD are top notch. If you don’t feel like watching a concert for an hour and half, the CD is a great option. A lot of the songs played during the concert were from Flogging Molly’s newest album “Float.” Don’t worry old school FM fans, they play their older stuff as well. With a set time of an hour and half, it would be hard for them not to play older stuff. In fact some of the songs that they do play (“These Exiled Years,” “The Son Never Shines On Closed Doors”) are ones I rarely hear live. I loved hearing “Requiem for a Dying Song,” “Salty Dog,” “Drunken Lullabies,” “Paddy’s Lament” and “Float.” It’s something about those songs that make them highlights every time I see Flogging Molly.

The DVD is definitely worth the price of the CD/DVD. The video production is excellent, and crisp. I liked the camera views and angles, and the lighting was bright & colorful. I felt there could have been more crowd shots though. Sometimes you felt like you were watching a band perform and no crowd was there. At least that’s my opinion on it. But other than that, I loved watching the DVD. Even though the DVD was directed by Kevin Custer…no not Kevin Costner; this DVD felt like the Joe Escalante (The Vandals) directed concert DVDs. Those DVDs “The Show Must Go Off” from Kung Fu Records are kick ass, that’s why this DVD felt like those. Besides the full length concert, there are also music videos from the band and interviews.

This is something fans should definitely consider buying because it’s a great CD/DVD. And if you can’t get to one of their shows, this is the next best thing! Although, seeing Flogging Molly live is highly recommended.