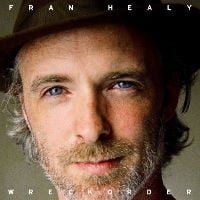 Fran Healy, lead singer of the Scottish band Travis, ventures out for his solo project with the 10 track album “Wreckorder.” An established singer/songwriter Fran Healy veers away from the styles of Travis to create something different. Beautifully haunting tracks one after another, and not to mention it features some outstanding guest performances, including Mr. Beatle Paul McCartney. This album comes highly recommended!

Fran Healy never thought he would be one of those front man who ever imagined taking time out from his band to pursue a solo act, until recently when Fran needed a change of pace mentally and creatively. “Wreckorder” was penned in his home in Berlin, and sought out some help from a few friends including Paul McCartney. I loved the story in the Press kit on how Healy thanked McCartney for pitching in with some bass lines for a song or two, which was Healy and his family turned Vegetarian to McCartney’s delight. Paul McCartney lends his bass playing skills on “As It Comes,” and “Buttercups” as well as Neko Case performing on “Sing Me To Sleep.” Neko Case provides a gorgeous duet with Fran as it’s haunting lullaby with a bit of a country vibe to it as well. Fran Healy was concerned about sounding the same as his prior work in his band, Travis but no need to worry as “Wreckorder,” is fantastic in it’s own right. Great hook lines & melodies, blended with Healy’s good sense of humor makes his solo album a success.

Bottom Line: One of the best records of the year!
Notable Tracks: Anything, Sing Me To Sleep, Buttercups, As It Comes, Holiday
Overall: