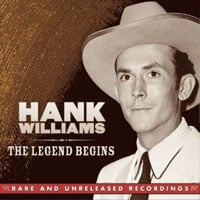 Yes, there’s even more unreleased Hank Williams music and I really don’t think that’s the end of them either. It seems like every year, Time Life and Hank Williams’ daughter Jett discover more music and then release it. I’m not complaining about that, in fact it’s a good thing, but just don’t want to see that this album is the last material that was unreleased. We all know there will be more right? At least I hope so!

The Legend Begins is a 3-disc that features rare, unreleased music from the legendary country singer. The first two disc contains 15-minute recordings for the Health and Happiness shows, Hank’s first syndicated radio show. The third disc is where you’ll hear one of the first recordings of Hank at the age of 15, plus some other rare gems. On the Health & Happiness show, you’ll recognize songs you like, but they are slightly different and have different titles. It’s interesting to see how the songs were changed over time. Hank’s first recordings is a song called “Fan It,” which he’s playing along with Alexander’s Ragtime Band. As you can tell, the recording is very scratchy but it’s remarkable that they even found this. Besides the Alexander’s Ragtime Band recordings, there’s some songs from 1940, as well as The March of Dimes show that was recorded between January 15th-31st of 1951.

You won’t find the best audio on this 3-disc set, but it’s for the die-hard Hank Williams fans. The first two disc sound the best and surprisingly well and the third disc is the worse, but the quality is so rare and old it’s to be expected.

Bottom Line: Another historic Hank Williams album to own!
Notable Tracks: Lovesick Blues, Where The Soul Never Dies, Fan It, Mind Your Own Business
Overall Rating: