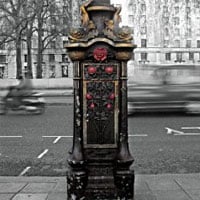 Moneen has, yet again, produced the perfect reason to sit with, listen to, and truly appreciate an album. The World I Want to Leave Behind is a masterpiece with carefully crafted details in each track. It is important to give this record undivided attention, since a distracted listener could easily miss some of the more intricate melodies hidden in these songs. Every sound fits like a puzzle piece and sounds so natural that some of this band’s talent might go unnoticed to a casual listener. With their fourth full-length album, Moneen has once again shown impressive musicianship that continues to push their talent to a new level.

The World I Want to Leave Behind takes a step away from the experimental fringe where The Red Tree, Are We Really Happy With Who We Are Right Now and especially The Theory of Harmonial Value tended to tread. The previous albums (including the EP Smaller Chairs for the Early 1900s) sound eccentric with purposefully off-tempo drums and ornate guitar riffs that, for some reason, ended up sounding cohesive and making perfect sense in the end. The band usually has a knack for keeping songs unpredictable, this album is sprinkled with a couple of surprisingly familiar emo-style build ups and shouting vocal melodies that are not familiar territory for Moneen.The drum build up and “woah oh” sing-along in “Believe” sound a tad cookie cutter for a band with such an atypical style. Similarly, the angry double-vocals on “The Glasshouse” are strangely predictable at first listen, something not akin to the Moneen-style. However, these are very specific instances that can simply be chalked up to listening to too many emo records in the studio. The band may be taking baby steps toward a new musical direction that will hopefully appeal to new listeners and the loyal fans alike.

“Hold That Sound,” “Great Escape,” “Redefine” and “Waterfalls,” on the other hand, are the heart of this album and the soul of the band. “Hold That Sound” is a bold example of classic Moneen and helps to kick the album off with pure energy and adrenaline. This sets the mood for the rest of the album and offers a powerful feeling of anticipation for what is to come. The next track, “Great Escape” features complex guitars and drums that showcase the art of this music with such deliberate emotion and such a strong statement that the album could end right there at track three and still be great. Luckily, they press on with the radiant “Redefine” followed by “The Way.” Both songs are refreshing and breezy, they serve as a delicate deep breath in the middle of the album. The softer elements of these songs help to even out the pace of the album as a whole with calming melodies and lighter vocals. While staying on the softer side, with a powerful exploration of new sounds and emotion, “Waterfalls” is unforgettable with passionate, stirring vocals to match. Singer Kenny Bridges has done it again and again, with his stellar singing throughout the entirety of this album.

Gone may be the really long, expressive, song titles and lengthy songs to match that have previously served as Moneen’s trademark, but what remains is the essence of a band who has grown up over the course of four albums and an EP. Their style has become more straight-forward and ballad-ey but does not lack the musicianship that they are known for. They have by no means dumbed it down but have grown more accessible while remaining true to their original sound. If there is an album to put Moneen in the spotlight where they belong, The World I Want To Leave Behind would be the one.

Bottom Line: .Moneen. has grown but still does not disappoint. The album deserves time and attention to fully appreciate what the band has created.
Notable Tracks: “Hold That Sound”, “Great Escape”, “Redefine” and “Waterfalls”
Rating:

emo, Moneen, rock, The World I Want to Leave Behind, Vagrant Records