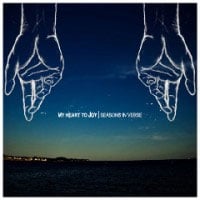 My Heart To Joy “Seasons in Verse” is the latest album off of Top Shelf Records. If I had to describe this band, I would say their music sounds like a train coming off the tracks. But musically, I guess they play a mixture of post-punk, emo and screamo.

Albums that start off with an instrumental track bug me because it takes me out of the listening experience immediately. I just think it’s a boring way to start an album. If you never heard of the band, you don’t know what kind of music they play until the second track. “Empty Hands” gave me a good sense of what My Heart To Joy sounds like, and I don’t like it. Sloppy guitars, headache-inducing singing and shitty production makes me want to throw this album out the window. Perhaps other people will like this album but I hated it.