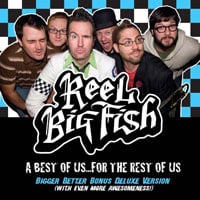 I have to admit that I missed out on “A Best Of Us…” regular edition the first time around. I’m not a big fan of acoustic music by any band and there wasn’t a lot of new content on the two-disc edition other than re-records of most of RBF’s singles. I really didn’t feel like I was missing much. I am glad to say that now that I’ve picked up the Bigger Better Bonus Deluxe Version, I can also admit that my initial thoughts have been proven wrong.

“A Best Of Us…” BBBDV is chocked full of ALLLL sorts of Reel Big Fish goodness. My favorite part about this whopping three disc set, other than the price (I picked it up for $12 since Reel Big Fish never sends me free stuff * sad face *), is disc 2: Skacoustic. The acoustic guitar backed by the full band provided me with a side of one of my favorite bands that I never heard before. It definitely added a whole new dimension to many of their greatest hits. The Deluxe edition tacks on over a half dozen new skacoustic songs as the last outing. In fact, not only are there bonus songs on both discs from the previous release but there is also an entirely new bonus disc of nothing but RBF cover songs aptly titled “The Best Songs We Never Wrote”. There are re-records, new songs, album cuts and rarities by bands ranging from Sublime and the Specials to Van Morrison and Poison.

We can’t leave out the first disc on “A Best Of Us…”BBBDV though since the whole point of Reel Big fish releasing the regular edition and subsequently the deluxe version in the first place was so that they could somehow get the rights back to all of the older songs that are currently in the greasy palms of some evil record label exec. Some people may scoff at what the band has done but it definitely took a lot of time and commitment and quite a bit of dedication to their songs and to their fans to go back and put the effort into not just rehashing their old songs but to package it up in an amazing bundle (there are also reusable RBF stickers included!) at a bargain price. I found myself enjoying some of the classic tracks that I know and love so well with some of the neat little additions and slight variations that arise throughout. The line of “One of us” in “Trendy” that the band has done live on many an occasion, the face melting solos contained in “The Set Up (You Need This” that showcase how talented of a guitar player Aaron Barrett is and how much his skill have grown since 1998 and the more energetic sound and recording of “The Fire” are just a few examples of those little tweaks.

Whether you’ve been a fan of Reel Big Fish for the past fifteen years or if you’re just getting into them for the first time for whatever reason, “A Best Of Us…For The Rest Of Us” super major ultra lush deluxe edition is a great starting point. There are songs from every era of Fishdom and in just about every genre they’ve ever put into sonic transmission. I’m disappointed that there isn’t a skacoustic version of “New York, New York” but that’s just me. I’m weird like that. If you’re thinking of heading out to the mall to pick up the latest Lady Gaga or Lil’ Wayne album, stop and ask yourself “what am I doing?” and “why am I listening to this kids stuff?”. Forget about paying $20 for a measly 12 songs and grab hold of the three-inch thick digipack of “A Best Of Us…” Deluxe Version and get more bang for your buck! Babies everywhere will thank you.

Bottom Line: It’s pretty much any and everything that you can ask for from the Fish.
Notable Tracks: They’re all good but personal favorites are: I’m Cool (Skacoustic), Everything Sucks, Take On Me (any version), Where Have You Been (any version), Kiss Me Deadly, Boss D.J., Give It To Me
Overall Rating:

A Best of Us for the Rest of Us, Aaron Barrett, Deluxe Version, Everything Sucks, I'm Cool, punk, RBF, Reel Big Fish, ska, Skacoustic, Take On Me, The Set Up (You Need This)