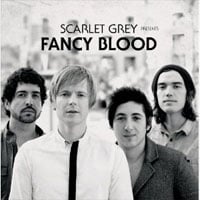 Scarlet Grey have been on the “scene” a few years now but I never heard of them until now. This year you might have seen them open for AFI, or maybe not? Their EP contains 6 tracks that are catchy, rockin’ and something people might like.


Judging by their album cover, I literally had no idea what kind of music Scarlet Grey played. I still can’t really categorize it but the first track “No Boys in the Bathroom” is quite catchy, especially the chorus! It’s got punk elements, it’s got alternative elements, and rock and roll elements. The title track “Fancy Blood” is a danceable rock song that showcases Ben Grey’s singing abilities. “Naomi” breaks up the norm with a ska-ish, nerd rock tune that makes you want to bop your head back and forth.

I’m surprised to say this but this album is good. It’s different and has lots of good qualities about it. Good singing, catchy beats, and it’s an overall great EP!