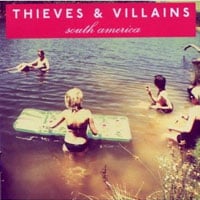 Thieves and Villains hail from the Hudson Valley, which is where I’m from. They play indie rock/emo/whatever you want to call but honestly, I never heard of them before or seen them live. Their new album South America came out in August on Victory Records and it’s actually a breathe of fresh air to not hear a metal band on Victory Records.

South America is the band’s sophomore effort but it sounds like they have been recording for a lot longer than just two albums. Even though the band are from the Hudson Valley, it still doesn’t change the fact that I don’t like their music. The singing is a bit whiny for my tastes, but it’s thankfully not like that on every track. I found the tracks “Virginia Woolf” and “Island Water Blues” decent, but found the track “Drunk in Amsterdam” a bit annoying. You can listen to their album on their official website, give their album a whirl and see if you dig it. Thieves and Villains isn’t really my thing but I’m sure others will appreciate their music.