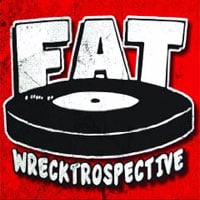 Fat Wreck Chords has been around since 1990, and they are celebrating their 20th anniversary a little early. They released the album in December 2009 so they jumped the gun a bit. I’m okay with that since they are celebrating the label with a kick-ass 3-disc compilation featuring classic Fat songs, as well as rare demos and songs from the Fat Club series!

The first disc contains 33 hit tracks from various Fat bands. Just some of the bands you’ll hear on here include: NOFX, Lagwagon, No Use for Name, Strung Out, Good Riddance, Me First and the Gimme Gimmes, Descendants, Swingin’ Utters, Screeching Weasel, Mad Caddies, Against Me and lots more! Pretty much every Fat band you’ve heard is on this disc. It’s a perfect punk rock compilation because it features 1 song from each Fat band and it’s all their hits. This disc alone is worth the price of the album. If this disc proves anything, is that Fat Wreck Chords is by far the best consistent punk rock label ever!

The second disc features 28 tracks of demo tracks and rarities. This part of the disc contains a lot of the newer Fat Wreck bands like None More Black, Rise Against, Lawrence Arms, Dead To Me, Smoke or Fire and others. An awesome raw track “Flies First Class” from Good Riddance starts off the disc nicely. The quality of the tracks varies but I’m fine with it. I kind of like when this type of punk sounds like it was recorded in a garage. You’re not going to get sharp quality tracks when this entire disc is devoted to demos.

The last disc is devoted to the “Fat Club” 7 inch series. The club would release a new 7 inch each month from February 2001 to January 2002. This disc only has 11 bands on it like The Vandals, American Steel, One Man Army, Real McKenzies, MXPX, Strike Anywhere, Strung Out, NOFX and a few others. I really enjoyed this part of the compilation because I never heard of these tracks. Well most of them anyway. Guess the same can be said for the 2nd disc as well. Overall, this entire compilation is excellent and shows you that Fat Wreck Chords is best punk rock record label! Let’s hope they continue the consistency that they have shown over the last 20 years.

Against Me!, dead to me, Descendants, Fat Wreck Chords, Good Riddance, Lagwagon, Lawrence Arms, Mad Caddies, Me First And The Gimme Gimmes, No Use for Name, NOFX, None More Black, punk rock, rise against, Screeching Weasel, Smoke or Fire, Strung Out, Swingin’ Utters, Wrecktrospective