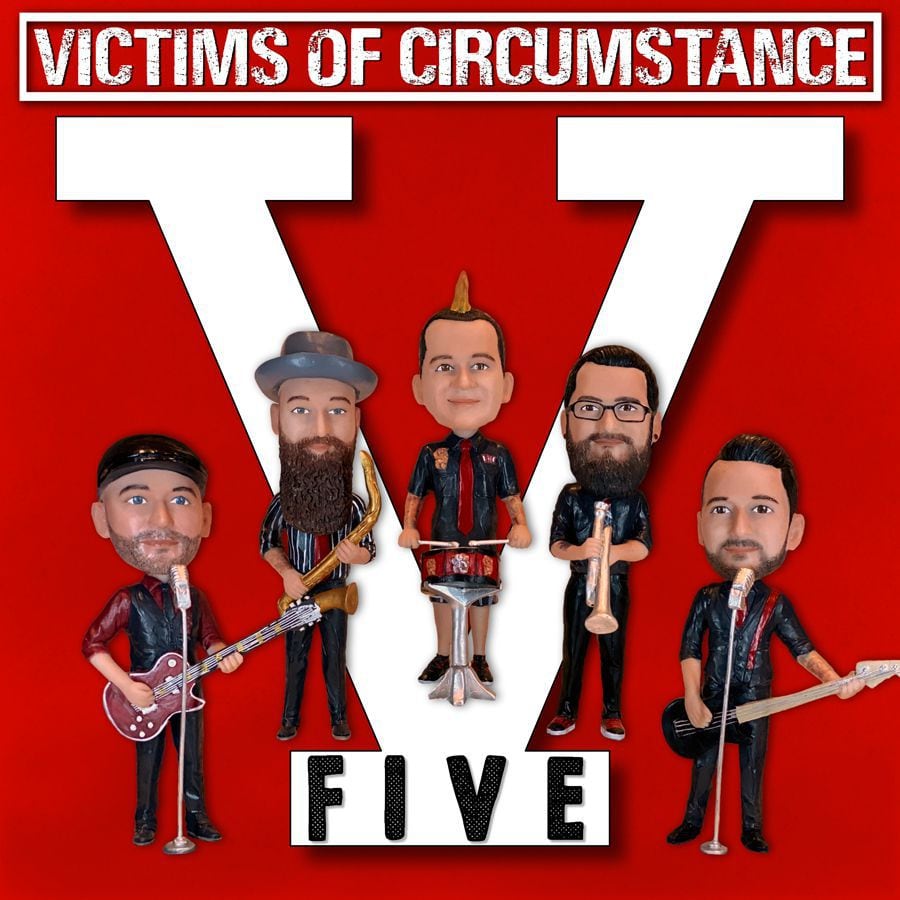 Clearwater, Florida’s Victims Of Circumstance is set to release their fifth full-length album aptly titled “Five” in January 2020 and, with the band’s blessing, Readjunk gets to post up an early review.

Personally, I’ve been following the band since their first full-length “Do It Yourself” in 2007. Over the years, they’ve provided me with a soundtrack to some good times. They released a couple of amazingly EPs of cover songs in “Decades” and “Decades 2” and have yet to tour the Northeastern United States. Reading the press release for “Five”, the band talks a lot about a more varied and mature sound with a broader scope of musical genres throughout. At times the band mentions that they’re not just a ska punk band or that they didn’t set out to make a ska punk album and, while I’m not a VOC insider, I don’t know if they planned to do that on past albums. What I do know is that from my point of view, I’ve never considered Victims Of Circumstance just a ska punk band or just a punk band with horns. They’ve always been so much more. Maybe they don’t feel like their sound was varied enough or their lyrical content wasn’t more mature…but that’s never been the case in my mind. “Five” is a continuation of the bands natural progression. With that said, let’s give a brief rundown of what “Five” has to offer.

The first track is titled “Sober” is a guitar-heavy, horn-filled track about a life-long alcoholic who found someone to give them hope and bring about a change in their life. “Tonight We’re Getting Loud” is the second track and it’s a doozy of a ska punk track about taking a break from your work schedule to just let loose and party. Track number three is a two-tone influenced song called “The X” and feels like it was left off of “Roll The Dice” and has that fun, snarky VOC attitude about it. “Involuntary” follows that up with an edgy Oi sound reminiscent of the Bouncing Souls. Mike, the lead vocalist and guitarist, shouts to those that will listen that it’s his turn to be heard. It seems to be an anthem for doing whatever pleases you much to the chagrin of the nay-sayers.

The next third of the album gets interesting quick, with the band bouncing around some of those new aforementioned twists to their sound. “Aggravated” is a track about ignoring the frustrations and aggravations in life and mixes up some swing with some ska punk ala the Cherry Poppin’ Daddies. “Obey The Rules” starts up as a straight up reggae song and amps up the attitude as the song goes on, culminating in a circle pit-inducing ska punk number before chilling with the Rasta vibes to send things home. “Enemy” focuses on the faster punk sound of the VOC while telling a tale of inner-reflection and self-realization that sometimes you are your own worst enemy. “Quit Looking For The Win (Vinnie Owes Us A Solid)” finds the band touching upon that swing ska sound once again with a slightly faster pace and a sound similar to the Agents.

One of my favorite songs on “Five” kicks off the last quarter of the album with “Never Have I Ever” which reels off some funny, whimsical lines of things that they’ve never done all while comparing those things to finding a girl of their dreams. You can consider this the album’s love song and it’s just a fun pogo ska punk song in classic VOC format. “Roll The Dice” slows things down a bit with a skankable song with edgy horns and driving bass with lyrics that weave a short story of loss and loneliness. “The Edge” picks things up (pun intended, I guess) with a crazy punky ska song that would make Angelo Moore proud. “Ready To Go” is the last of the 12 tracks on “Five” and sends the album off with yet another classic-sounding Victims Of Circumstance ska punk song that gets your blood boiling and your moonstompers stomping just as quickly as it builds to a crescendo and abruptly ends with it being the shortest song on the album.

“Five” consists of 12 tracks by Victims Of Circumstance that showcase a variety of genres…from pop punk to swing…all held together with a strong ska and punk backbone. While the band may have not intentionally set out to make a ska punk record, they sure made one hell of a good one. They may not want to be labeled as just a ska punk band, but they never really were JUST a ska punk band. “Five” finds the band pulling some other musical tastes and influences together into to a sound that was already a grade above most other bands in the genre and into one of, if not their best album to date.

Bottom Line: “Five” is one of Victims Of Circumstances best albums as it combines some sounds and elements that the band hasn’t really touched upon in their eclectic repertoire while maintaining their ska and punk rock roots.
Notable Tracks: Never Have I Ever, Sober, The X, Obey The Rules, The Edge, Ready To Go, Aggravated
Overall Rating: