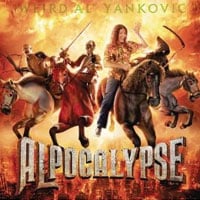 The weirdest Al in the universe is back with his newest release in five years with “Alpocalypse”. I have to say that I’m somewhat disappointed due to the fact that almost half of the songs on “Alpocalypse” have already been released on the “Internet Leaks” EP. I guess that’s why it was called what it was since they were “leaked” album tracks. Even though I’m familiar with the previously released songs, they as well as the full album, will receive a proper review.

“Alpocalypse” was a bargain since it included a DVD with music videos for all but two of the songs much like “Straight Outta Lynnwood”. The music videos are animated and are always a butt load of fun viewing pleasure. Now onto the album…

Pending an ongoing “feud” with Lady Gaga and the controversy surrounding Al’s cover of “Born This Way”, there was a possibility that the release of “Alpocalypse” was going to be delayed substantially. Thankfully the Internet saved us once again and the album was released on time.

“Perform This Way” kicks off the album with one of Al’s best-written songs in a long time, too bad it comes in the form of a Lady Gaga song. One of my favorite songs from “Internet Leaks”, “CNR”, which is a style parody of the White Stripes, follows up with a rock and roll fury not heard from Al since his “Bedrock Anthem” days. A few less than stellar songs follow up in “TMZ” and “Skipper Dan”, the latter being a style parody of a Weezer sound that I have thankfully ignored for the past 5 or 6 years.

Picking up the pace of “Alpocalypse” is one of his classic polka medleys aptly titled “Polka Face”. Thanks again Lady Gaga! The middle of “Alpocalypse” is where the meat and potatoes are for me. I surprisingly like the Doors style parody “Craigslist” even though I absolutely hate the Doors. “Weird Al” does it well and it reminds me of his “Poodle Hat” hit “e-bay”. I also secretly find the Miley Cyrus parody “Party in the C.I.A” catchy and quite humorous. Shhhhhhhhhh… After that is another of the “Internet Leaks” songs, “Ringtone” another style parody this time of Queen. The song is about all of the poor schmucks out there with the most annoying obnoxious ringtone on their phone. It is pretty spot on and every time I hear this song I have a mental image of Al in the studio recording with Queen with Freddie Mercury by his side chuckling away. I don’t really know why.

The remainder of the album consists of some crappy pop and hip-hop songs that “Weird Al” makes listenable with his trademark style and probably most of the time better than the originals. I really couldn’t say though since most pop music is foreign to me anyway.
“Another Tattoo” and “Whatever You Like” are the standout tracks at the latter part of “Alpocalypse”.

Personally, I’m not as fond of “Alpocalypse” as I was of “Straight Outta Lynnwood” but it is still a brand new “Weird Al” album and that can almost never go wrong. I’ve been listening to “Weird Al” since I was 6 years old and the fact that he is still relevant to the next generation of fans will never cease to amaze me. For someone, “Alpocalypse” will be a classic. For me it’s pretty good.

Bottom Line: Better than “Poodle Hat” but not as good as “Straight Outta Lynnwood”. Al parodies everyone from Queen and the Doors to Miley Cyrus and Lady Gaga.
Notable Tracks: CNR, Ringtone, Party In the C.I.A., Polka Face, the videos for CNR and Craigslist
Overall Rating: